South Sudan: A 'Diocese in Diaspora': Catechists 'pray on the run' in ravaged diocese 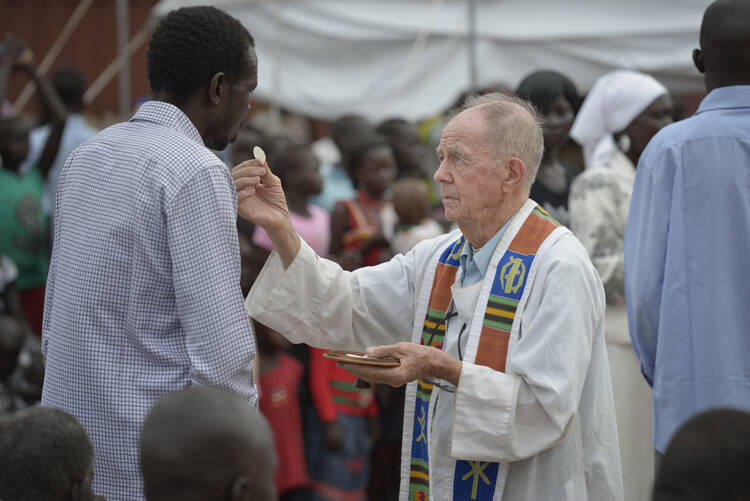 Two mass killings in South Sudan have taken place in a Catholic diocese whose leaders were forced to flee the conflict, leaving the church's work in the hands of lay workers who are often on the run from fighting.

"We are a diocese in diaspora. My priests and I were forced out of our pastoral setting by a situation on the ground that is beyond our control," Msgr. Roko Taban Mousa, apostolic administrator of Malakal, told Catholic News Service in an April 1 interview in Juba.

A handful of foreign Comboni missionaries remain in the town of Old Fangak, but Msgr. Taban Mousa and 16 other priests in the diocese were forced out by fighting that began in December, when a political split within the ruling party quickly tore the country apart along ethnic lines. More than 1 million South Sudanese are internally displaced or living as refugees in neighboring countries.

Yet Msgr. Taban Mousa said the church's work continues because of a committed group of lay activists.

"Many of our catechists are on the run with the people in the bush. Some of them call me when they get to a place where there is a (phone) network, maybe under a tree or on a high place. They ran from their villages because of the fighting, and they're suffering with their people, with few possibilities of getting food for themselves and their children," he said.

Msgr. Taban Mousa said the diocese, with almost a million Catholics spread over a huge swath of the country, has long had to wrestle with an inadequate supply of priests and religious. As a result, the diocese trained more than 450 catechists.

"When they call me now, for security reasons I don't ask them exactly where they are. But they tell me that on Sundays they are always trying to gather people and pray with them. It's not like before, when they'd gather children and teach them the catechism and prepare them for first Communion and confirmation. Now they gather people to pray on the run," he said.

Although the conflict began in Juba, the capital of South Sudan, some of the worst fighting took place in Malakal, where Msgr. Taban Mousa lived in the cathedral compound. Control of the city changed hands several times as government troops and rebels alternately pushed out the other side. Msgr. Taban Mousa stayed in the cathedral compound as it filled with more than 7,000 civilians fleeing the fighting.

"We remained in the cathedral, confined with the people in the compound, eating only rice because there was nothing to buy. The market had been looted. It was a difficult time. There were few toilets, but we had nowhere to send the people, who felt safe and protected in the church," he said.

For weeks they held on, and at times, Msgr. Taban Mousa had to shield the entrance with his body to prevent armed combatants from entering the compound.

On Feb. 18, however, the fighting took a turn for the worse, and the compound was overrun by rebels. Several people were shot and killed in both the cathedral compound as well as inside the nearby Christ the King Church. Msgr. Taban Mousa fled to the U.N. base at the edge of the city, from where he was evacuated by air to Juba.

Malakal was eventually recaptured by the government and remains under military control. For now, the monsignor lives at a seminary in Juba with several of his priests. He wants to return to Malakal as soon as possible, but said it will take considerable investment to return things to normal.

"Today it's just an empty mission with broken doors and windows. If we go back to the diocese, we will have to start from zero. We won't even find a spoon left behind," he said.

Two mass killings plagued the diocese in mid-April. In Bentiu, rebels killed more than 200 civilians and wounded more than 400 in mid-April, the U.N. reported April 21. On April 17, at least 58 civilians were killed and more than 100 injured when a pro-government militia attacked the U.N. base in Bor, where some 5,000 civilians had taken refuge. In each case, ethnic identity seemed to motivate who killed whom.

Father Edward Joseph Deng, the exiled parish priest of Bor, the Catholic community in South Sudan has been largely exempt from such ethnic hatred.

"Most of my parishioners in Bor came from the North after the independence of the South. They had enjoyed good social interaction in the North, so in our parish it was normal for people of different tribes to meet together and pray together," he said.

Msgr. Taban Mousa said such a spirit of tolerance could serve as a model for the entire country.

"We have to develop a sense of nationalism, of belonging to the Republic of South Sudan although we come from different tribes," he said. "All tribes are created and blessed by God. If you say one tribe is bad, that condemns the Creator himself."