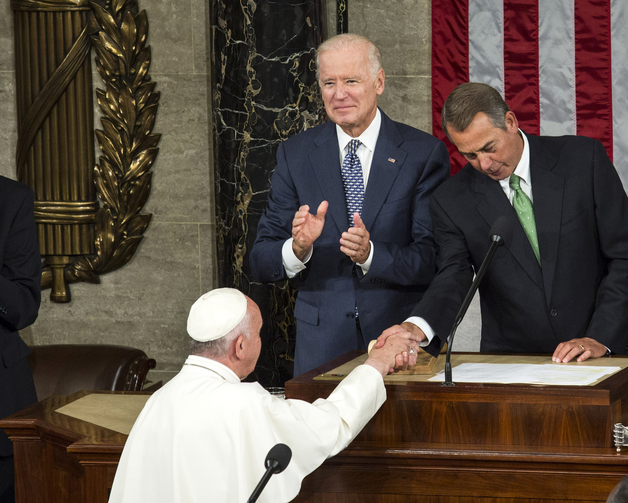 Bishop Kevin C. Rhoades of Fort Wayne-South Bend said he disagreed with University of Notre Dame officials for honoring Vice President Joe Biden with the Laetare Medal for outstanding service to the Catholic Church and society.

He said Biden's stance of not opposing abortion and his support of same-sex marriage make him ineligible to receive the award.

Biden, along with former Speaker of the House John Boehner, will be honored on May 15 during Notre Dame's 171st commencement ceremony. Both men are Catholic.

While not calling upon Holy Cross Father John I. Jenkins, Notre Dame's president, to reverse the decision, Bishop Rhoades said in a lengthy March 14 statement that "it is wrong for Notre Dame to honor any 'pro-choice' public official with the Laetare Medal."

Bishop Rhoades explained that although a public official has had many positive accomplishments in public life, that person's stance on fundamental church teaching disqualifies him or her for any Catholic honor.

Father Jenkins offered a brief statement in response to the bishop's concerns, saying, "While Bishop Rhoades and I do not always agree, I'm gratified that he acknowledged, in his words, 'Notre Dame's efforts to encourage civility, dialogue, mutual respect and cooperation in political life.'"

Bishop Rhoades said he met with Father Jenkins months before the announcement on who would be honored was announced, and they discussed the possibility of honoring Biden, a Democrat, and Boehner, a Republican, for their public service and not for either leader's stance on specific issues.

"I know this honor is also an attempt to recognize two Catholics from different political parties at a time when our national politics is often mired in acrimonious partisanship. I appreciate Notre Dame's efforts to encourage civility, dialogue, mutual respect and cooperation in political life," the bishop's statement said.

Still, Bishop Rhoades said, he disagreed with the decision to honor Biden in any way.

"I realize Notre Dame is trying to separate or distinguish conferral of the Laetare Medal upon the recipients from their positions on public policies. I do not think this is realistically possible or intellectually coherent," he said.

He suggested that the university would better promote civility, cooperation and dialogue in politics to host both men in a program on American politics "rather than bestow an honor that can provoke scandal."

"My principal concern about this whole matter is scandal," Bishop Rhoades said. "In honoring a 'pro-choice' Catholic who also has supported the redefinition of marriage, which the church considers harmful to the common good of society, it can give the impression to people, including Catholics in political office, that one can be a 'good Catholic' while also supporting or advocating for positions that contradict our fundamental moral and social principles and teachings."

The statement said that before any Catholic institution honors a Catholic public official, "we should make sure there is a basic consistency between their political decisions and sound Catholic moral and social teaching."

"We should not honor those who claim to personally accept church teaching, but act contrary to that teaching in their political choices," he said.

The bishop called on institutions to reflect on the meaning and significance of honors in relation to Catholic identity and mission, encouraging them to "raise the bar" when considering whom to honor. "I believe a higher standard is needed," he said.

The Laetare Medal has been given annually since 1883 to a Catholic "whose genius has ennobled the arts and sciences, illustrated the ideals of the church and enriched the heritage of humanity."

The honor is so named because its recipient is announced each year in celebration of Laetare Sunday, the fourth Sunday of Lent, which this year was on March 6.

Show Comments (
4
)
Comments are automatically closed two weeks after an article's initial publication. See our comments policy for more.
Barry Fitzpatrick
4 years 8 months ago
Bishop Rhoades suggests Mr. Biden and Mr. Boehner meet in a program on American politics instead of having Notre Dame "bestow an honor that can provoke scandal." Whom exactly does the Bishop have knowledge of being scandalized here? Isn't it a scandal for us to judge motivation where we have not fully consulted those making a decision like this? Isn't the scandal in drawing attention to the judgmental nature of such pronouncements which only serve to further alienate very good Catholics and to reduce us Catholics to single issue (OK, two issue) politics? Is the Bishop declaring that politicians who subscribe to the positions that Mr. Biden has taken are living in sin? He would hardly want to walk down that road in terms of the issue of conscience formation, would he? If Bishop Rhoades chooses to enter the fray of public politics versus private beliefs, must he not engage all Catholics where they are on these matters and proceed to judgement only after deep consultation with the persons involved? Instead what has occurred by his proclamation is further isolation of the Catholic voice and a guarantee that legitimate concerns about national policy on abortion and same-sex marriage will ignore Catholic teaching during political deliberations. Surely we deserve better.
ed gleason
4 years 6 months ago
Sitting bishops should know that they have forfeitted the right to use the word "scandal" on fellow Catholics for the next 100 years..Go find another word to offer their disapproval... No wonder Francis has such a hard time bringing mercy.into the Catholic faith
Richard Booth
4 years 6 months ago
I agree, Ed. It is very difficult to follow the teachings, opinions, and preaching of the cohort of clerical people whose characters have clearly demonstrated that they deserve the disrespect they are receiving from the people of the Church and others. I hope that, never again, will people be fooled by the chicanery and pedantry of some of these prelates. I also hope Francis lives long enough to really clean house of those in his curia who are simply obdurate, as well as those who have clearly shown hypocrisy.
alan macdonald
4 years 6 months ago
Next up, Kermit Gosnell for service to women and the country.