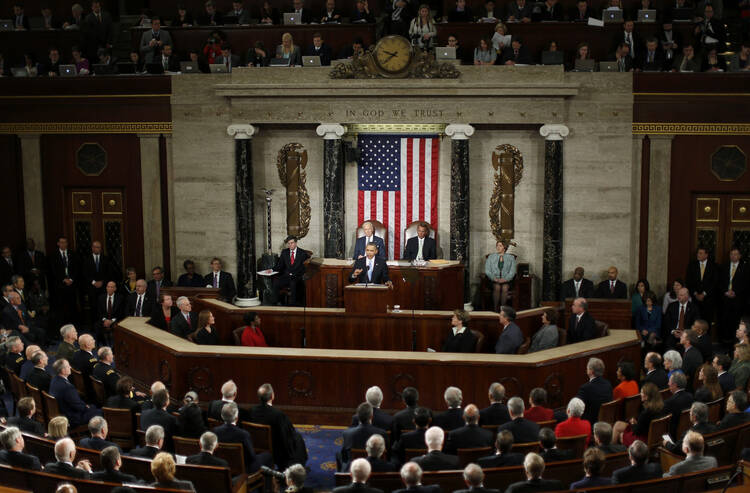 In his fifth State of the Union address on Jan. 28, President Barack Obama stressed many themes that are on the advocacy agendas of faith-based organizations: income inequality, immigration reform and peaceful resolution of global conflicts. Comments about the speech the next day highlighted some details that advocates for poor people and immigrants, in particular, would like to see addressed.

Father Larry Snyder, president of Catholic Charities USA, released a statement saying he was encouraged by Obama's focus on "creating ladders of opportunity that have the potential to raise up the vulnerable in our nation, strengthening communities across the country and restoring the dignity of every American." As the country marks the 50th anniversary of the "war on poverty" launched under President Lyndon Johnson, said Father Snyder, "we must decide as a nation that we can't wait any longer to act on behalf of those least among us."

Obama mentioned several steps toward boosting the economy, including revamping the tax code; upgrading infrastructure, streamlining bureaucracy and the permitting process for major projects; supporting entrepreneurs and small-business owners; and encouraging energy independence and clean energy systems. He also said Congress "needs to restore the unemployment insurance you just let expire for 1.6 million people," and, without specifying how, said there need to be changes to address wage inequality for women, and changes in workplace policies so workers don't have to sacrifice their jobs to take time away to care for sick children or parents.

He said he would be ordering an increase in the minimum wage paid to employees under federal contracts. He said the increase to $10.10 an hour would boost productivity and reduce turnover. "If you cook our troops' meals or wash their dishes, you should not have to live in poverty," he said. The current federal minimum wage is $7.25 an hour, although 21 states and the District of Columbia have higher minimums. The Associated Press reported that about 1.6 million people work for the minimum wage, although another 2 million are paid less, many because they work in jobs where tips are expected to augment their income. Their minimum of $2.13 an hour hasn't increased for more than 20 years. Obama supports raising the minimum for tipped workers to $7.07, the AP said.

Father Snyder said he was heartened by other points Obama made, including "the recognition of the need to provide food for the poor, the need for increased access to quality early education and job training as important pathways to opportunity." He added, however, that "we also feel an urgency to place a priority on addressing more effective methods for reducing poverty for the more than 46 million Americans living in poverty today."

Poverty doesn't occur in a vacuum, he said. "It's time our nation realizes that our economy, education and workforce will not be as strong as it can be as long as the poor and most vulnerable populations continue to be overlooked. Reducing poverty means more Americans living healthy and productive lives. Working together now is the only way we can achieve a healthy society and thriving communities for all."

Obama also advocated giving more low income people the opportunity to attend college and fixing the immigration system as components of economic improvement. "If we're serious about economic growth, it is time to heed the call of business leaders, labor leaders, faith leaders, law enforcement -- and fix our broken immigration system," Obama said. The Senate has passed an immigration reform bill with bipartisan support, he observed. "I know that members of both parties in the House want to do the same."

Obama noted that "independent economists say immigration reform will grow our economy and shrink our deficits by almost $1 trillion in the next two decades. And for good reason: When people come here to fulfill their dreams -- to study, invent, contribute to our culture -- they make our country a more attractive place for businesses to locate and create jobs for everybody."

At a teleconference on Jan. 29 with several immigration reform advocates, Kevin Appleby, director of migration policy and public affairs for the U.S. Conference of Catholic Bishops, said that in addition to the economic benefits Obama emphasized, "the human stakes are high." Inaction by Congress means "the social fabric of the country will continue to break apart," Appleby said.

In the same teleconference, Lorella Praeli, advocacy and policy director for United We Dream, which focuses on changing laws that affect immigrants who were brought to the country illegally as children, said Obama didn't talk about his administration's "atrocious record of deportations," which in five years exceeds the number who were deported in the eight years of the previous administration. She said that just as Obama created a system by which young adults can seek deferred deportation status which enables them to legally work, he could also order an end to deportations of people who would be eligible to legalize their status under the legislation passed by the Senate.

Angela Kelley, vice president of immigration policy at the Center for American Progress, said it seems unlikely at this point that Obama would take more executive steps to dramatically change the current picture for undocumented immigrants. Kelley observed that applause for Obama's immigration comments by key Republican leaders in the House chamber during the speech—including a standing ovation by Rep. Paul Ryan, R-Wis., chairman of the House budget committee—suggests the House may be finally ready to move on immigration reform.