Sisters Act: Two documentaries on the work of women religious

Sisters Act: Two documentaries on the work of women religious 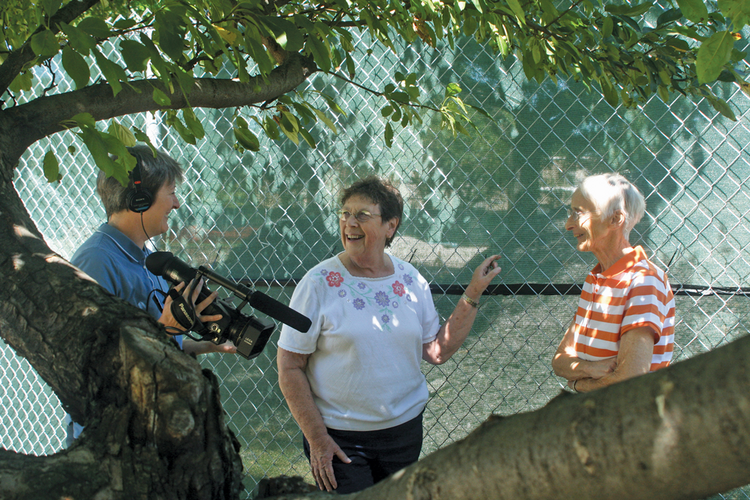 There is nothing quite like a nun with a voice.

This month, 50 years after Soeur Sourire, the Belgian singing sister, topped the charts with her pop hit “Dominique” (and received the dubious distinction two years later of being portrayed on screen by Debbie Reynolds), Sister Cristina Scuccia of Sicily won the televised talent competition “The Voice of Italy” with her rendition of “What a Feeling,” a rousing performance complete with a kick line of “monks” hiding pastel-colored suits beneath their robes.

In the 1965 Debbie Reynolds movie, the order was embarrassed by the nun with a guitar; on “Voice of Italy,” the judges were only embarrassed when Sister Cristina accepted her award by reciting the Our Father.

Public prayer often makes people uneasy. So do acts of conscience. You see it in Band of Sisters, Mary Fishman’s charming and inspiring documentary about American women religious and how they have lived and changed since the Second Vatican Council. Throughout all its captivating interviews with fascinating women talking about the issues that drive their work—the environment, food, health care, social activism of various stripes—the film keeps returning to Joann Persch and Pat Murphy of the Sisters of Mercy, who hold regular demonstrations at the Broadview Detention Center in Illinois. There they pray for undocumented immigrants who are being bused out, their families often being left behind, and they try their best to console the distraught. (The sisters’ lobbying efforts on behalf of the state’s Access to Religious Ministry Act of 2008 are also recounted.)

What is interesting, aside from the action itself, is how the guards at Broadview treat the prayer group—curtly, even abusively. It is as if the guards were trying to sleep through their role in an unjustifiably cruel and politically manipulated deportation system, and the sisters were the alarm clock they wanted to knock off the nightstand.

They are embarrassed, in other words, by people putting into practice those values that are supposed to be part of the fabric of civilized society—to say nothing of a society that publicly espouses so much high-flung religious fervor—but that are often principles too inconvenient or unprofitable to actually be followed.

So it has been since Vatican II, which may have been followed by a decrease in religious vocations but which also resulted in a revitalization among many women who stayed. The American sisterhood may not be the conscience of the church, but they are the “risk-takers,” as one nun puts it. This has led to friction between the nuns and the Vatican, tensions that may now be relaxing but were in some ways inevitable. (“Band of Sisters” was made pre-Pope Francis, so its point of view is not quite up-to-the-minute.)

“Band of Sisters,” which offers some of the more intelligent company to be shared at the movies, is also definitive of the grass-roots movie release. “Mary didn’t know about film distribution,” said Ms. Fishman’s associate Jessica Rosner, “but she knew where the nuns are.” Combining their respective fields of expertise (Ms. Rosner is a veteran of independent film distribution), they have taken the film where the nuns are, where there are concentrations of sisters and sympathetic audiences and have had a remarkably successful, virtually unadvertised tour around the country. Back in Debbie Reynolds’s day the ads used to trumpet, “Coming soon to a theater near you.” Well, “Band of Sisters” may well be coming to a theater near you, but it might also be a church basement, convent or high school auditorium. (To find out, visit bandofsistersmovie.com.)

Another woman religious with a voice worth listening to is Sister Rosemary Nyirumbe. Although she isn’t out to embarrass anyone, her brand of unqualified charity certainly is humbling. The subject of director Derek Watson’s Sewing Hope, Sister Rosemary is the power behind St. Monica’s School in northern Uganda, where the madman Joseph Kony has been doing the work of his Orwellian-named “Lord’s Resistance Army” through murder, rape, pillage and the enslavement of children. Sister Rosemary’s work has been teaching the young girl victims of Kony’s war a trade—sewing—and trying to restore their sense of self-worth in a society that has viewed them as largely irredeemable.

The stories contained in “Sewing Hope,” told by children who have been forced to commit unspeakable crimes, are appalling in their sadistic brutality. The idea that there is some kind of a cure for their psychic wounds is not really part of the program at St. Monica’s, but Sister Rosemary’s brand of unconditional love and support seems therapeutic, at least; a sense of accomplishment, a sense that the source of their self-loathing is not their fault is what Rosemary tries to instill in the students. It is an inspiring story, and would be even without many of the film’s moody close-ups of the girls, or the animated sequences that try to appropriate the tensions of a graphic novel, or even actor Forest Whitaker’s narration, which often lapses into portentous sentiment. The story does not need any of these embellishments. In fact, they are less than flattering to a subject who is so matter-of-factly Christian in a very pure sense and who might scoff at the idea that Jesus’ message required dramatic enhancement. It’s her girls that need help, and Sister Rosemary is doing what she can to offer it. (To learn more, visit prosforafrica.com.)

John Anderson is a film critic for The Wall Street Journal, Indiewire and Newsday and a regular contributor to the Arts & Leisure section of The New York Times.