Shelter From the Storm: An education in violence and the Gospel

Shelter From the Storm: An education in violence and the Gospel 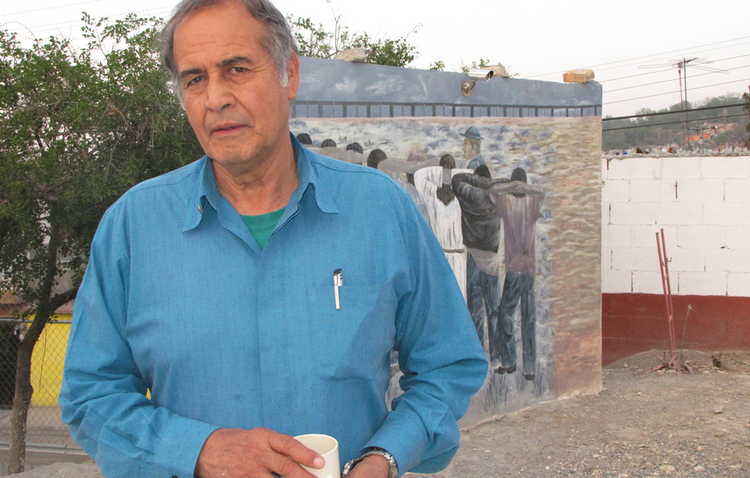 Father Pedro looked at me with saddened eyes. “One hundred seventy people dead, with a sledgehammer,” he explained. My Spanish was poor, but I understood what he said. I met Father Pedro Pantoja in July while traveling in northern Mexico with my pastor, Dan Kayajan, C.S.C. Meeting Father Pedro was like visiting a modern-day prophet. We sat together in a large room—a room later used to serve lunch to about 45 migrants from Central America who were making their way through northern Mexico, an area Father Pedro called the “territory of blood and death.” Here, Father Pedro and others serve many migrants seeking a new life in the United States.

That afternoon in Saltillo, Mexico, Father Pedro told the story of the 170 people whose lives were brutally and senselessly cut short last spring by the notorious gang, Los Zetas. The bodies of the Central American migrants—mothers, fathers, children and grandparents—were pulled from large dirt pits last April, leaving behind the evidence of a truly barbaric mass-murder.

Father Pedro shared eyewitness testimony from others who described how the men, women, children and elderly were abducted and then separated from one another to face different, cruel deaths. The men were taken to die by sport. They were forced to fight one another in gladiatorial-like death matches with sledgehammers. If they refused, they were shot. The women were raped and then murdered after being told they deserved to die because they were prostitutes. Small children were killed with acid, while the elderly were lined up and run over by the very buses they had hoped would take them to freedom in El Norte.

That afternoon, the men staying at the shelter shared nearly identical stories of poverty, fear and violence. Daniel, 38, left his wife and three children in Guatemala to search for work in Mexico or the United States. Although he and his wife both worked, the pay was so meager they could not afford to feed and clothe their children. He desperately wants to work in order to provide a basic standard of living for his family. Because of this he felt forced to leave them to find work that would pay a living wage.

Nelson fled Honduras after taking his wife and four children to a safe house. His brother and father had been murdered, while his sister was raped and murdered by the Zetas. Their “crime” was not being able to pay the war tax levied by the Zetas against those in his village. “They gave me three days to pay or they would kill me,” he explained. “There are neighborhoods that are empty because people couldn’t pay the tax and were forced to flee.”

The desire to provide their families with basic necessities motivated these migrants to take on the enormous risks associated with the journey through Mexico, where an estimated 10,000 people are murdered each year. Additionally, the migrants have become a source of easy money for organized crime and gangs like the Zetas. Father Pedro estimated that about 12,000 people will be kidnapped this year and ransomed back to their already impoverished families after being tortured and abused. “Although the migrants are poor, they are still bait for the criminals,” he explained. “They are like merchandise, just a way to make money.” The danger of violence on the way north is shocking—entire busloads are taken—but little is done about it. Many accuse law enforcement and government officials of complicity in the crimes.

At Casa del Migrante, Father Pedro and his group of volunteers provide a safe environment, hot food, showers, rest, basic social services and advice for migrants. People from the shelter protect the migrants from traffickers as they disembark from trains nearby and bring them back to rest and prepare for the last leg of the journey. Most migrants pass through Mexico on the roofs of trains. By the time they reach Saltillo, they are only about two hours from Texas and many are physically and emotionally exhausted.

Father Pedro told us about the numerous threats he has received because he runs the migrant shelter. Father Pedro, the volunteers and staff live in constant danger of death. When I walked into the shelter, a police officer patrolling the area demanded my identification and inquired about my business at the shelter. When gang members shot up the shelter last year, however, the officer seemed to disappear quickly, explained Father Pedro. Not only are people like Father Pedro vulnerable to the gangs and organized crime rings, they have also been mocked by their communities and even by those in the church, once being told it was a sin to help illegal migrants. When asked why he risks his life to carry on this ministry, Father Pedro offered a powerful response: “If we didn’t do it, we wouldn’t be faithful to the Gospel.”

His words have stuck with me. I struggle to develop a personal response to this crisis. Like many others, I can support Casa del Migrante or other places like it financially and with prayer. But there may be something more at stake. Although I do not feel I have any power over immigration law, control over global economic markets that change human migration patterns or any way to stop the Zetas, I can re-evaluate my understanding of how to live the Gospel. Father Pedro opened his eyes to the situation of immeasurable suffering and abuse in his community and became actively engaged in protecting and promoting the dignity of his migrant brothers and sisters.

Since I have returned from Saltillo, I have become more aware of attitudes and prejudices held deeply within our society and secretly within my own heart. I have been forced to confront the idea that the commodification of human life is real, pervasive and horribly destructive. The migrants, because of their vulnerability, are seen as a target for abuse and a source of profit rather than persons with intrinsic value. So often we brand others as undeserving of our unconditional love, mercy and compassion because we refuse to understand their dignity and our connection to them as brothers and sisters.

As in the parable of the good Samaritan, Father Pedro and many others throughout the migrant trail in Mexico risk their lives to serve the vulnerable community passing through their midst. St. Paul writes, “Behold, now is a very acceptable time; behold, now is the day of salvation” (2 Cor 6:2). In our Christian lives, as we work to turn away from sin and follow the Gospel, let us remember that in so many ways, Nelson and Daniel are present in our midst. Returning from my brief journey through the territory of blood and death, I knew that I did not have to be in a different country to meet those who have been oppressed by injustice and violence, those who have been robbed of their basic dignity. May we rededicate ourselves to ending the grave injustice and violence in the world.

Show Comments (
1
)
Comments are automatically closed two weeks after an article's initial publication. See our comments policy for more.
Brews Up
6 years 10 months ago
Can't help but to think that there will never be an end to this sort of violence. People like Fr. Pedro are living saints for risking it all to help the poor and to tell people like you the truth that this sort of evil still exists. It is truly unbelievable that there are human beings out there that rape, pillage, abuse and kill innocent people, especially having them fight each other with sledgehammers for mere entertainment. Are we that far removed from the Roman times? Most will read this story, if shared, and do nothing. What can we do to help? What are the next steps? Prayer only goes so far...
Advertisement

This article also appeared in print, under the headline “Shelter From the Storm,” in the July 29-August 5, 2013 , issue.

Randall Woodard, an associate professor of theology and religion, is the department chair at St. Leo University in St. Leo, Fla., and editor of the International Journal of African Catholicism.