Salvadorans: Romero First of Many Whom Church Should Call Holy 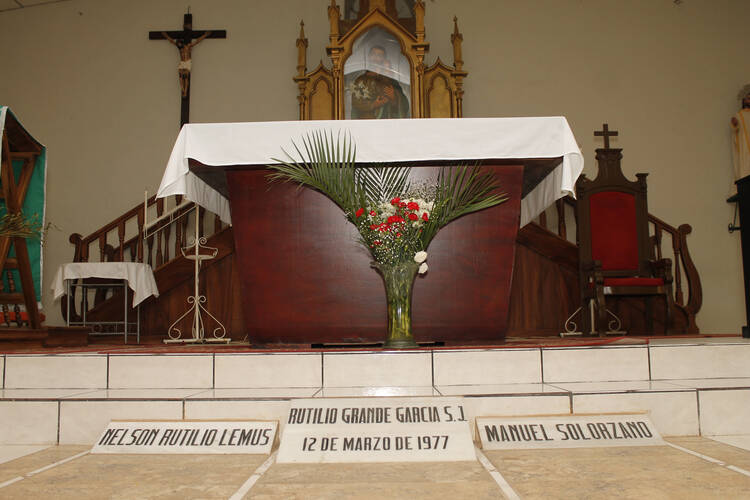 Almost as soon as Salvadoran Archbishop Oscar Romero was declared "blessed" by the Vatican May 23, talk of his canonization began. When will it happen? Where? Can it be held in El Salvador since the people to whom it matters the most, the poor, will not be able to make it if it is held in Rome?

The beatification has sent Salvadoran church officials on a quest, not just to have Blessed Romero canonized, but also seeking church recognition of the sanctity of other Salvadoran Catholics killed in and around the country's civil war. They include Jesuit Father Rutilio Grande, another defender of the poor, killed by machine gun, along with two parishioners in 1977. Archbishop Jose Escobar Alas of San Salvador, El Salvador, has asked that Father Grande's sainthood cause go forward since his death is closely linked to Blessed Romero's.

The two were friends when Blessed Romero became head of the Archdiocese of San Salvador in 1977, and many believe that Father Grande's work, with marginalized peasants in the countryside, greatly influenced Blessed Romero. Father Grande's subsequent assassination, after speaking out in defense of the poor, also had a profound effect on the archbishop. Italian Archbishop Vincenzo Paglia, the postulator of Blessed Romero's cause for sainthood, often links the two, rarely leaving behind Father Grande when he speaks of Archbishop Romero. Publicly, there is great expectation that El Salvador's next beatification will be that of Father Grande.

During Blessed Romero's beatification Mass, Archbishop Paglia went beyond speaking of Father Grande and brought up the "priests, men and women religious, catechists, and simple faithful who were brutally murdered," during El Salvador's 12-year conflict. More than 70,000 Salvadorans perished.

Blessed Romero, Archbishop Paglia said, is "the first in a long repertoire of contemporary new martyrs," who died at the hands of modern totalitarian regimes.

To some, such as 81-year-old Gregoria Martinez de Jimenez of Soyapango, who lived through the war, what the church is officially recognizing with the beatification and with talk of canonization is something that many in El Salvador already believe: Blessed Romero is a saint and so are those who shed blood, armed with nothing more than the words of the Gospel to defend themselves and others during a violent conflict that lasted from 1979 until 1992.

At the tiny one-bedroom home where Blessed Romero lived as archbishop, there's a photo that looks as if it's drawn by a child, featuring the archbishop, accompanied by Father Grande. It's near a wall of plaques, votive offerings expressing gratitude for the archbishop's intercession during one type of tribulation or another -- a public declaration of faith that he is in heaven and has interceded for them.

Some Salvadoran Catholics do not like, or want, to hear the difference between beatification and canonization and can be offended by its mere mention. But to those like Patricia Lazo of San Salvador, the church's official recognition of sanctity "is important because the Catholic Church, which I love, is already recognizing what (Archbishop Romero's) sheep recognize: his holiness."

In February, Pope Francis signed the decree recognizing Archbishop Romero as a martyr, a person killed "in hatred of the faith," which meant there is no need to prove a miracle for beatification. In general two miracles are needed for sainthood—one for beatification and the second for canonization.

Unless the pope intervenes, the church's sainthood process calls for the verification of a miracle attributed to the sainthood candidate's intercession before the canonization can be scheduled. The miracle must take place after beatification.

If there's a miracle that many hope for, it is an end, or at least a sharp decline to the violence that still plagues Blessed Romero's El Salvador. In May, the country saw more than 500 homicides, even as gang leaders said they would decrease violent activities in honor of the martyr's beatification.

Archbishop Paglia said that walking toward the canonization of Archbishop Romero "means walking together with him, distancing ourselves from all forms of violence and practicing love and peace. That is the miracle we ask from Blessed Oscar Romero: the miracle to remain united and to change the world with our love. Only love—not violence—changes the world."