Skip to main content
Signs Of the TimesApril 7, 2014 issue 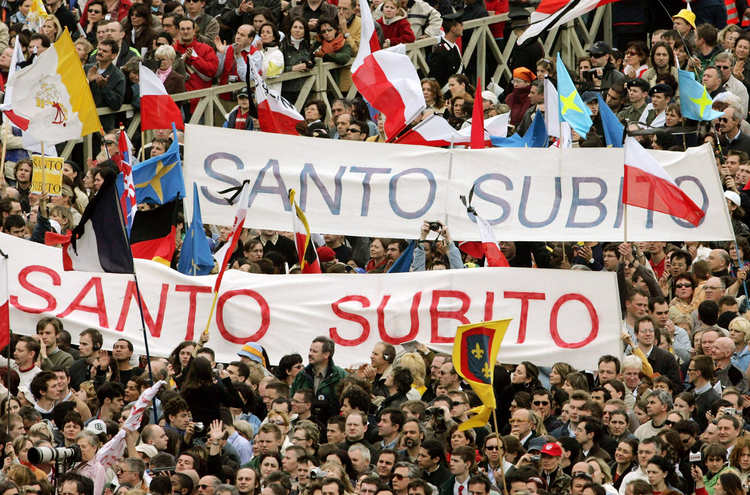 Just weeks before the canonizations of Blesseds John XXIII and John Paul II, hotels in Rome are reporting they are almost fully booked, and the Vatican has confirmed that the Mass will take place in St. Peter’s Square. That means hundreds of thousands of people will have to watch the ceremony on large video screens.

Pope Francis announced in late September that he would proclaim the two popes saints in a single ceremony on April 27, the Second Sunday of Easter, also known as Divine Mercy Sunday. Less than two weeks after the date was announced, the Prefecture of the Papal Household issued an advisory that access to St. Peter’s Square would be first-come, first-served and warned pilgrims that unscrupulous tour operators already were trying to sell fake tickets to the Mass.

With perhaps more than a million people expected to try to attend the liturgy, rumors had abounded that the Vatican would move the ceremony to a wide-open space on the outskirts of Rome. But the Vatican confirmed on Feb. 27 that the Mass would be held in St. Peter’s Square, just outside the basilica where the mortal remains of the two rest.

A spokeswoman for the office of Rome’s mayor said the city hoped to have by March 24 a working estimate of the number of pilgrims, as well as preliminary plans for transporting them to the Vatican and providing them with water, toilet facilities and first aid stations. Marco Piscitello, a spokesperson for the Rome hotel owners’ association, Federalberghi, said that already by early March, owners were reporting that more than 82 percent of hotel rooms in the city had been booked for the canonization weekend.

“There will be a strong presence in Rome for this double canonization,” he said.

Blessed John Paul II, known as a globetrotter who made 104 trips outside Italy, served as pope from 1978 to 2005 and was beatified by Pope Benedict XVI on Divine Mercy Sunday, May 1, 2011. Blessed John XXIII, known particularly for convoking the Second Vatican Council, was pope from 1958 to 1963; Pope John Paul beatified him in 2000.

Asked by reporters in July to describe the two late popes, Pope Francis said Blessed John was “a bit of the ‘country priest,’ a priest who loves each of the faithful and knows how to care for them; he did this as a bishop and as a nuncio” in Bulgaria, Turkey, Greece and France before becoming a cardinal and patriarch of Venice.

He was holy, patient, had a good sense of humor and, especially by calling the Second Vatican Council, was a man of courage, Pope Francis said. “He was a man who let himself be guided by the Lord.”

Meeting in March with priests from the Diocese of Rome, Pope Francis said one of the greatest inspirations of Pope John Paul was his intuition that “this was a time for mercy.”

“It is a gift he gave us, but one that came from above,” Pope Francis said. “It is up to us as ministers of the church to keep this message alive, especially in our preaching and gestures, in signs and pastoral choices—for example, in deciding to give priority to the sacrament of reconciliation and, at the same time, to works of mercy.”

From AP, CNS, RNS, Staff and other sources
Show Comments (
1
)
Comments are automatically closed two weeks after an article's initial publication. See our comments policy for more.
HARRY REYNOLDS
7 years 2 months ago
I am not surprised that one pope found that two other popes were saints, though those two other popes might have laughed at the thought. In any case, as an onlooker of your religion, and at the risk of being thought impolite, I suggest that you should choose your saints from the outter fringes of your religion, from the brutally poor, from the brave, from the sharp tongued critics of your organization, from the protesters however foolish they may appear, from the improvidently fiery who will not take crap from anyone, in short from the many who stumble into sainthood by living lives of doing good within the reach of only their families and never further than the hedgerow around their gardens. If God gave them money to rent those rooms in Rome from which thousands will watch the ceremony of canonization, they would go and, among other signs of the irretrievable past, laugh especially at the sight of those weary Cardinals with their nodding hats that make them look like strange birds of prey.