Roads to Perdition: Explorations of hell from Argentina and Ireland 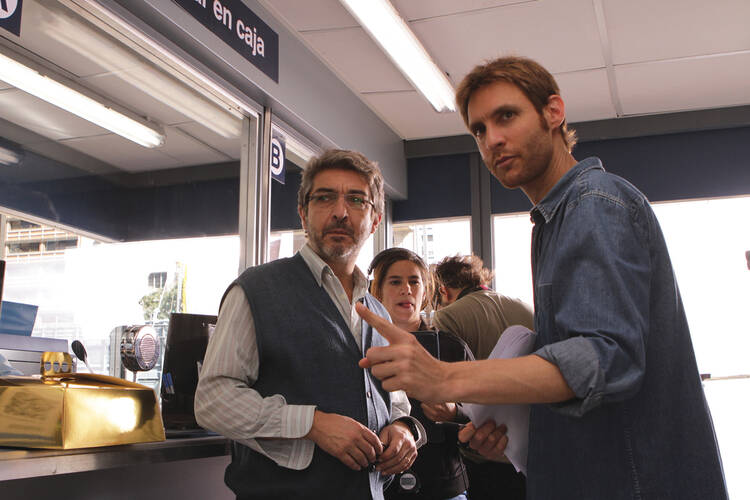 Hell. Not a location we care to dwell in, though dwelling on it has occupied no small amount of time, or words, or dreadful words, since poets started studying perdition. Dante, most famously and with an immortal amount of detail, described nine circles of calibrated agony, advising the hell-bound to abandon all hope. The Jesuit-educated James Joyce, via Father Arnall (in Portrait of the Artist as a Young Man), described hell as a place where “the blood seethes and boils in the veins, the brains are boiling in the skull, the heart in the breast glowing and bursting, the bowels a red-hot mass of burning pulp, the tender eyes flaming like molten balls....” Jean-Paul Sartre simply said hell was other people.

All of the above—as well as Jesus’ command that sinners, “Depart from me, you cursed, into the eternal fire” (Mt 25:41)—might have inspired the makers of two recent feature films: Wild Tales, the Oscar-nominated Argentine entry for best foreign language film this year (it lost to “Ida,” reviewed here last June), and ’71, the dire but gripping drama from the United Kingdom amidst the Irish Troubles, in which a British soldier is lost in Belfast, without a Virgil and without a clue.

“Wild Tales,” directed by Damián Szifron, is eager to outrage. Like the violent “’71,” it is rated R, partly for a modest amount of extremely immodest behavior but also for its violence. And yet alongside the self-indulgence and intemperance that invariably get the characters into an enormous amount of trouble is an awareness that eternal suffering will come from separation—from a loss of communion with one’s fellow man and God, and a loss not just of acceptable behavior but of simple morality. Solitary confinement may be immoral and promote madness, but it doesn’t necessarily require a cell.

The opening and closing episodes of “Wild Tales” are probably the most deftly drawn of the film’s six chapters, all of which concern themselves with characters who are offered the opportunity to comport themselves with good judgment and dignity and who, on impulse, choose another path entirely. The first story, which unfolds before the title of the film even appears, involves a plane full of passengers who, just accidentally, discover they share a troubling connection (and not the one to Honolulu, bada-boom). The last involves a bride at her wedding totally losing her cool when she suspects her new husband has been intimate with one of the guests. You will be praying that someone has hidden the cutlery.

To say more about those episodes would give too much away, but the others can be at least sketched out safely without blowing the payoff. In one (a nightmare scenario involving road rage and immolation) two drivers take their vehicular differences to an extreme that verges on the absurdly comic. In another, a young waitress recognizes her abusive customer as the man who ruined her father, drove him to suicide and then tried to seduce her mother. Should she, as her older female co-worker counsels, put rat poison in his food?

In a third, a demolition expert (the well-known Argentine actor Ricardo Darin), a man who blows up derelict buildings with such care that the dust barely stirs, goes to war with the Buenos Aires parking violations bureau, which he views as a totalitarian regime devoted to ruining his life and populated by agents of Satan. Unlike some of the other folk in Mr. Szifron’s film, Mr. Darin’s character is wholly ridiculous. But like the others, he indulges his worst instincts and in the process becomes a moral exile.

There are plot twists, to be sure, and some very polished filmmaking. What Mr. Szifron makes very evident is that his characters are inviting trouble by abandoning Christian principles, most obviously that of turning the other cheek. In every instance, their destiny—spiritual and otherwise—would have been infinitely improved had one character or another simply done what he or she ought, swallowed a small amount of pride, understood that members of a bureaucracy are just doing their jobs (we’re talking about workers at the D.M.V., after all, not Nazis) and exercised a modicum of selflessness.

None of which would have helped young Private Gary Hook, played in “’71” by the up-and-comer Jack O’Connell, who was so enjoyably out of control in the U.K. prison drama “Starred Up” last year and suffered so endlessly in Hollywood’s unending “Unbroken.” Everyone has a least favorite bad dream, and Hook’s may be yours: the nightmare of being hopelessly lost in a place where time has stopped and hope has vanished.

In “’71,” that place is Belfast, in the year of the title, when the Troubles were at their most dire, something director Yann Demange portrays not just by a set design of blasted, treeless streets and ruined buildings but also by a palette bordering on the bilious, with overtones of khaki and a camera technique that is dizzying. Hook, who along with the rest of his platoon is expecting to go to Germany after boot camp, is sent instead to Northern Ireland, where they are to assist the Royal Ulster Constabulary (portrayed as particularly brutal by Mr. Demange) and where a disorienting strain of warfare confronts the young recruits. The nuances of the conflict are beyond their ken; the combatants all look alike.

There’s a certain amount of confusion in store for the viewer, too, as Hook, left behind when a mob scatters his unit, is pursued by the Provisional I.R.A., the more moderate I.R.A., the Protestant Loyalists, his own unit and an ambiguous operative whose allegiances are more than suspect. Hook gets beaten, shot at, blown up, stabbed, throttled and shot at again, all in a night without end. There is very little choosing of sides in “’71,” but what Mr. Demange gets exactly right, via young Gary Hook, is the feeling of being utterly alone, a sense that because of something unclear that you did, or are, you have been totally abandoned by both God and man. Hell indeed.