The topsy-turvy world of Psalm 118 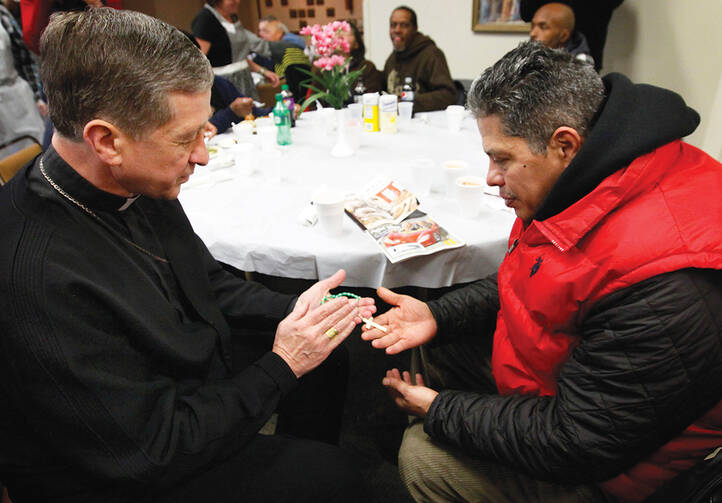 Some accounts tell us that when Lord Cornwallis surrendered to George Washington after the Battle of Yorktown in 1781, the band played the then well-known English ballad called “The World Turned Upside Down”:

Listen to me and you shall hear, news hath not been this thousand year:
Since Herod, Caesar, and many more, you never heard the like before...
Yet let’s be content, and the times lament, you see the world turn’d upside down.

For Lord Cornwallis at that moment the notion of the world turning upside down certainly would have signified a cataclysm. But it need not always be so. There are times in our lives when things are sufficiently awry that the only solution to our dilemma would be for the world to upend itself.

A more recent song title, from Richard Farina, asserts, “Been Down So Long It Looks Like Up to Me.” All of us have times when we have been down. Things go wrong for us with our health, in our personal relationships, professionally, economically. These can be painful, difficult times. And when we are in the midst of such times, it seems as if we cannot imagine a way to get out. At moments such as these, Psalm 118 and others like it can be particularly precious. They promise us that the world can turn upside down—in our favor. As still one other folk song suggests, “The world is always turning toward the morning.” The world can turn to a brighter side for us. And that is what Psalm 118 celebrates.

If there is one theme that we can trace throughout the Book of Psalms it is the pattern that I like to think of as “reversal of fortune.” Repeatedly it describes things moving in one direction and then abruptly reversing themselves for the better. There are many examples of what in classical Greek drama is called peripeteia: the point when a sudden reversal occurs. We see a peripeteia in Psalm 30:

For His anger is but for a moment
His favour is for a life-time
Weeping may tarry for the night,
But joy cometh in the morning…
Thou didst turn for me my mourning into dancing;
Thou didst loose my sackcloth, and gird me with gladness
(Ps 30:6,12)

Elsewhere in Psalms we read:

God maketh the solitary to dwell in a house;
He bringeth out the prisoners into prosperity
(Ps 68:7)

Who is like unto the Lord our God,
That is enthroned on high,
That looketh down low
Upon heaven and upon the earth?
Who raiseth up the poor out of the dust,
And lifteth up the needy out of the dunghill;
That he may sit him with princes
Even with the princes of His own people.
Who maketh the barren woman to dwell in her house
As a joyful mother of children.
Hallelujah.
(Ps 113:5-9)

This reversal of fortune talks to us in the most direct, personal terms. We can read it when we are most troubled, letting its words become our own. As we find ourselves celebrating the reversal of fortune, the story becomes unique to us and we can feel ourselves moving from darkness to light, from dejection to hope and then onward to praise and thanksgiving. What could be more uplifting than to hear—as our own story—the words of Psalm 118:

Out of my straits I called upon the Lord;
He answered me with great deliverance.
The Lord is for me; I will not fear;
What can man do unto me?
(vss. 5, 6)

We read of travail and triumph, just as we ourselves have experienced. We are challenged, threatened, oppressed—and yet we prevail:

The psalm speaks in direct, graphic language. It tells its story—and ours—in rich poetry. It declares, “I will not die but live/ And declare the works of the Lord” (v. 18). And “The voice of rejoicing and salvation/ Is heard in the tents of the righteous” (v. 15).

The stone which the builders rejected
Is become the chief corner-stone
This is the Lord’s doing
It is marvelous in our eyes
This is the day which the Lord hath made
Let us rejoice and be glad in it
(vss. 22–24)

The poet David Rosenberg has captured in modern idiom the spirit of the reversal of fortune in verse 6:

Psalm 118, and so many other songs in the Book of Psalms, recognizes that we all have times when we enter the valley. It holds out for us a vision of the mountaintops that can be ours. It affirms that no matter what sloughs we may find ourselves in, there can be a reversal of fortune. The world can turn upside down and what is but a distant vision of contentment and joy can become our immediate reality. That hope is one of the great gifts of this remarkable book.

Psalm 118 also gives us the opportunity to explore one unfortunate chapter in the use of the psalms and in the relations between Christians and Jews. The “father of English Hymnody,” Isaac Watts (1674–1748), wrote over 750 hymns. His hymn “O God Our Help in Ages Past” continues to be sung in, and is beloved by, many Protestant churches. It turns out that, representative of his time and place, Watts’s religious perspective caused him to have profound contempt for Jews and Judaism. Watts believed that the psalms were never really understood by the Jews who first sang them but came into clarity only after the advent of Jesus. His antipathy to things Jewish is reflected in one of his several paraphrases of Psalm 118.

Watts builds on the New Testament’s own interpretation of the “stone which the builders rejected” in verse 22 as referring to Jesus (Mt 21:41, Mk 12:10, Lk 20:17, Acts 4:11 and 1 Pt 2:7). Watts reflects that New Testament perspective in strident terms in his rendition of that verse:

See what a living stone
The builders did refuse
Yet God hath built his church thereon
In spite of envious Jews
The scribe and angry priest
Reject thine only Son;
Yet on this Rock shall Zion rest
As the Chief corner-stone.

This is hardly a sentiment we would recognize in our time of mutual recognition and respect between these two sister traditions. Watts’s vituperation reminds us just how far we have come.

In yet one final hymn based upon Psalm 118, Watts includes none of his interreligious disputation and has created a lovely interpretation of several verses of this psalm that demonstrate the unity in which, amid our topsy-turvy, upside-down world, we are united by one God:

Like angry bees, they girt me round;
When God appears they fly;
So burning thorns, with crackling sound,
Make a fierce blaze and die.
Joy to the saints and peace belongs;
The Lord protects their days:
Let Isr’el tune immortal songs
To his almighty grace.

Daniel Polish, the Rabbi of Congregation Shir Chadash of the Hudson Valley in LaGrange, N.Y., is vice-chairman of the International Committee for Interreligious Consultations with international religious bodies and the author of Bringing the Psalms to Life. In honor of the 50th anniversary of the Second Vatican Council’s “Declaration on the Relationship of the Church to Non-Christian Religions,” America has invited Rabbi Daniel Polish to reflect on the psalms. This article is the second in a four-part series.

Show Comments (
3
)
Comments are automatically closed two weeks after an article's initial publication. See our comments policy for more.
Mary Pearlman
7 years 2 months ago
I'm always happy that I subscribe to America, both in print and online, but never more than last night when the terrible news about Paris was broadcast. I thank you, Rabbi, and America, from the bottom of my heart, for sending me this so very well-timed article of faith and hope. I need it so much.
Monica Doyle
7 years 2 months ago
Thank you so much, Rabbi Polish, for this beautiful and timely article. From the most personal ( my son's high school football team nearly lost the championship game Friday night until some last minute plays by a few players, one of them my son! ) to the most global ( same Friday night, the attacks in Paris) - these Psalms ground us in the virtue of hope in the most beautiful and poetic way. Thank you for what you contribute to America Magazine.
William Rydberg
7 years 2 months ago
Interesting perspective. FYI. I would think that Isaac Watts, would have had an equal or greater contemporaneous contempt for Catholics and Catholicism as well, during that period. Interestingly, there is scholarly speculation/discussion around him being either a Unitarian or an Arian. In my opinion, this might be a reason why the central doctrine of Catholicism- the Trinity is not present in the songs I am aware. he was a popular hymn writer in his time, i only know of one title of his where the Trinity is mentioned..