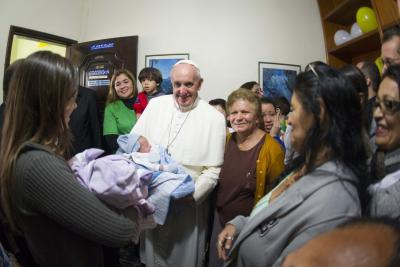 “A Church for the Poor,” by Bishop Robert W. McElroy (10/21), is an appropriate and timely complement to Pope Francis’ long interview published in America on Sept. 30. Among the many topics the pope addressed, perhaps the one given considerable attention was his observation that the church cannot insist only on abortion, gay marriage and contraceptive methods. Then he added, “We have to find a new balance.”

Bishop McElroy makes the persuasive case that in the pope’s frequent messages on poverty is found the needed balance in our Catholic political conversation. In pursuing the common good, he argues that structural sins of poverty actually are more relevant than sins of intrinsic evil. In the pope’s view, alleviating poverty is neither optional nor secondary but must be at the heart of the church’s mission.

This acute insight into the pope’s consistent teaching on poverty and its devastating effects on hunger, lack of meaningful work, health care and decent housing, must be a priority that is part and parcel of the pro-life agenda. Otherwise, the pope said, there is the danger of losing the “freshness and fragrance of the Gospel.”

Bishop McElroy makes a refreshing appeal to his brother bishops and the faithful in their dioceses to embrace Pope Francis’ vision of a church for the poor.

(Most Rev.) Joseph A. Fiorenza
Houston, Tex.
The writer is archbishop emeritus of Galveston-Houston.

The article by Bishop McElroy calls forth the same old and tired social justice that Pope Francis does not appear to support. Personal conversion appears to be the pope’s central focus. Bishop McElroy, however, continues endorsing “trickle-down charity,” the notion the federal government and the Catholic Church should continue their partnership for the poor both in the United States and abroad.

Brokered deals with the government do away with what St. Francis actually did: beg directly to people, practicing humility. Perhaps it is time to move from the halls of Congress and its surrounding opulence and actually work directly with the poor, getting our hands dirty.

Perhaps the example and fervor of Bishop McElroy in directly loving the poor will change sinful structures not by trickle-down charity but through new wheat springing forth, inspiring all Catholics and people of goodwill to do the same. It does not matter if my argument is good or not. Pope Francis’ argument is spot-on and truly inspiring.

Thanks to Bishop McElroy for his important reflections on the transformation of the Catholic political conversation. I know from personal experience how much that conversation has been distorted by those who have given intrinsically evil acts such a priority in public life that it excludes consideration of other questions of grave wrongs.

I suggest that the root of the problem lies in the virtually exclusive role that moral philosophy has had in articulating a Catholic approach to politics. Ironically, it is similar to the Kantian principle that politics is a subdivision of ethics. Principles that may have been drawn from a Catholic political philosophy like that of Jacques Maritain or a Catholic legal philosophy developed within the Scholastic tradition (Jean Dabin, for example), have been ignored.

All of these works address the greater complexity of public order, but have no meaningful place in predominant Catholic circles of higher education and episcopal leadership. A more comprehensive and balanced intellectual framework, drawing upon diverse but orthodox ways of knowing, is necessary if we hope to bring Catholic political discourse to maturity.

Re “A Pastoral Invitation” (10/21): Cardinal Donald W. Wuerl appears to have been touched by the pastoral sensitivity of Pope Francis. I see this as something very positive. I hope other U.S. bishops are moved in the same way.

But I wonder: If Francis had been pope a few years ago, when Cardinal Wuerl issued the condemnation of the theological work by Elizabeth Johnson, C.S.J., Quest for the Living God, would he have done all this with greater pastoral sensitivity? Would there have even been a formal and public condemnation, which made many of us wonder about the quality of justice manifested?

I could be wrong about what Francis’ approach would be, but I believe the models for his ministry as pope will be that of John XXIII and Paul VI. I hope this is the case, and I pray that Francis will send us many pastoral bishops.

All Part of God’s Family

I’m a great admirer of Cardinal Wuerl and consider myself fortunate to have him as my archbishop. I’ve also had the honor of having brief but certainly not shallow conversations with him. I mentioned once—maybe twice—that sometimes I felt marginalized within the church, though I love the church very much.

Shortly after those conversations, Cardinal Wuerl published the cardinal’s appeal for 2012, titled, “Seek First the Kingdom of God.” I printed it out and have it tacked to the wall in my bedroom, where I see it every day, because of this: “Yet it is precisely the mission of the Church to bring the healing that says we are all a part of the kingdom, we are all a part of God’s family…no one should be left outside.” That clinched it for me, and I’ve been his biggest fan ever since.

Thank you for publishing “A Big Heart Open to God,” by Antonio Spadaro, S.J. (9/30). Some of the pope’s comments remind me of an essay titled “A Letter From the Pope in the Year 2020,” by the distinguished Jesuit theologian Karl Rahner (1904–84), published in Theological Investigations, Vol. XXII, in 1991. Father Rahner expresses what a pope might say in the future.

Francis said, “I am a sinner.” Father Rahner wrote, “…authority does not suffer damage, but rather profits, when its bearer openly admits the limitations of a poor and sinful human being, and is not afraid to acknowledge them.” Francis: “I do not want token consultations, but real consultations.” Father Rahner: “I am willing to listen to public discussions in my presence, eventually to learn from others, and to admit that I have learned.”

Father Spadaro described the “simple, austere” setting of the pope’s room. Father Rahner wrote, “I have a feeling that through their grandeur these popes [of the 20th century] had an influence in the church which they probably never intended and which had its questionable side, an influence that I will try to offset with my more modest pontificate.”

Father Rahner’s essay is somewhat prophetic. He did not know who the pope would be. Perhaps he would be surprised to learn that it would be a fellow Jesuit.

I would like to congratulate Bill McGarvey on the excellent column, “Who Am I to Judge?” (9/30). I have been an ordained priest for 39 years and have known dozens of priests over these years. A very significant percentage of both priests and bishops are gay. This is equally true of women religious. This is, simply, reality. We need to, as McGarvey puts it, “speak honestly about what is real.” Kudos to Mr. McGarvey, and to America for publishing his column.

The following is an excerpt from “McElroy’s Game Changer,” by Michael Sean Winters, in The National Catholic Reporter (10/10). The blog post is in response to “A Church for the Poor,” by Bishop Robert W. McElroy (Am. 10/21).

If this were merely an academic discussion, Bishop McElroy’s article would still be important. But because of the political use to which the notions of intrinsic evil and prudential judgment have been put, and specifically the way some conservative Catholic commentators have set the two ideas in opposition to one another, McElroy’s article is a game changer.

Other prelates, most notably Cardinal Sean O’Malley, O.F.M.Cap., have celebrated Pope Francis’ focus on the poor and his holding up the social doctrine of the church. But so far as I know, Bishop McElroy is the first prelate to explicitly and authoritatively challenge the use, better to say misuse, of Catholic moral theology in discussions of public policy.…

What we have in this essay is a bishop who “gets” Francis but who also “gets” American culture and begins a dialogue between the two. Bishop McElroy has made a significant contribution to Catholic moral and political discourse. Let’s hope his brother bishops are listening.

What a great piece! One thing I would add is that Pope Francis has not only called for us to be a church for the poor, but also a church of the poor. This really changes things. As a Maryknoll lay missioner, I can remember so many times sitting in my parish in La Paz, Bolivia, surrounded by neighbors who were struggling with poverty, and listening to European priests talk about “the poor” as if they were always “other.” “We have to help the poor” and “we must not forget the poor,” etc. How might they have spoken if they had identified more closely with the parish community as “we, the poor”? After all, that’s how Jesus spoke with his disciples.

I understand that Bishop McElroy is addressing a U.S. and largely middle-class audience. It’s a challenge for those of us who are not economically impoverished to imagine ourselves as part of a church of the poor, but it’s a healthy challenge to seek new and more radical forms of solidarity. As for the kinds of ministry the church engages in in poor communities, I think Ivan Illich addressed the issue in these very pages 46 years ago (“The Seamy Side of Charity,” 1/21/1967).

Pope Francis has lived with the poor, identifies with the poor and sees himself as representative of a church of the poor. I hope the church in the United States can begin to explore more fully the implications of this call to conversion.

This article also appeared in print, under the headline “Reply All,” in the November 11, 2013, issue.