Reply All: What our readers are saying 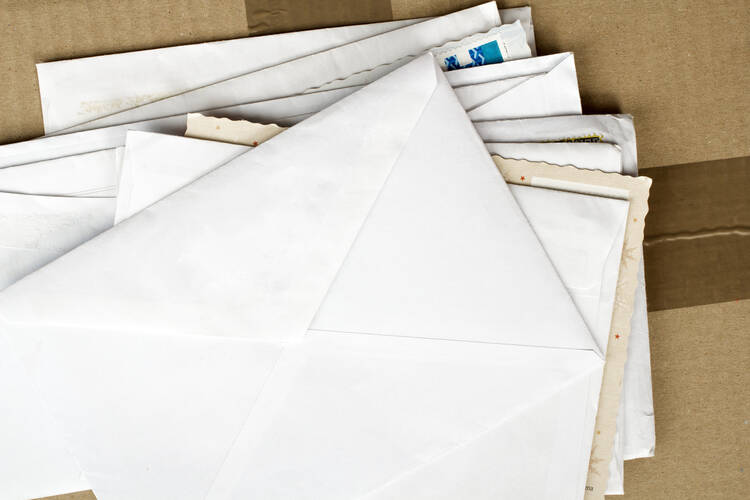 Wealth in a Paperback

Re “How the World Will End,” by Paul Almonte (11/28): Sixty years ago in a high school senior English class, Sister Rose Margaret recommended a small jewel of a paperback: Mr. Blue. It was love at first “read.” Who wouldn’t love J. Blue? Sister’s additional recommendation, Gift From the Sea, completed a duet of treasured classics that remains on my shelf. Rereading them at various stages of my life has awarded new insights, literary pleasures and—dare I add—graces. Thank you Sister Rose Margaret, Myles Connolly and Anne Morrow Lindbergh, respectively.

Reading the concluding paragraph of Mr. Blue, I tucked between those last pages a personal reflection: “I like to believe that J. Blue is not dead but alive in each of our souls—alive as so many sparks of an eternal flame.”

My conviction holds. What a wealth contained in a 65-cent paperback. Thank you for your review of Mr. Blue. Such heroes, begotten by gifted writers, deserve eternal life.

It is good news that Myles Connolly’s Mr. Blue has been reissued this year through Cluny Classics. In 1928 Myles Connolly foresaw the crisis of faith, the need for solidarity with the poor, the rise of agnosticism and the emptiness of the arts when devoid of faith.

Another Connolly prediction noted by Mr. Paul Almonte in his review was that the “new masses” would not have time for the printed word. If Connolly is correct on this one too, then why not meet the amazing Mr. Blue through live theater?

Two years ago, on the 50th anniversary of the death of Connolly, it was my honor to prepare a stage adaptation of Mr. Blue as a commemorative reading directed by George Drance, S.J., and performed with actors at the Dramatists Guild of America in New York. In attendance were Connolly family members, including his daughter, Mary Connolly Briener, who wrote the preface to the new print edition. (See America’s article “A Journey With Mr. Blue,” by Michael V. Tueth (5/29/14). Last year, the Sheen Center provided two readings of the play, again under the masterful direction of George Drance.

What’s next? How about a full stage production to introduce this charismatic character to new audiences? Where are the theatrical angels to make it happen? As J. Blue himself said: “Anything’s possible!”

Re “The Change is Us,” by Robert David Sullivan (11/28): I do not think our best days are behind us, but I do not see a tendency to look forward to the future with hope. Instead of net-zero energy buildings with solar power and electric cars (or good public transportation), we are acting like the "good old days" really existed and we need ever more mining of fossil fuels.

Re “A Crossroads in Oakland,” by Kaya Oakes (11/21): The Second Vatican Council calls us to encourage liturgical celebrations that honor the worshiping community regardless of race or ethnicity. In my own experience as an African-American Catholic, I have seen that expressions of cultural identity at worship help all of us to remember that we are all created in God's image. The church has much to gain, in the words of the late liturgist and musician the Rev. Clarence Joseph Rivers, “from the refreshing, renewing and inspirational experience that Black [Catholic] worship is and can be.”

Re “Northern Warning” by James T. Keane (11/21): Mr. Keane's good article on how American Catholics are turning to secularism, as are the modern Québecois, ignores something too readily ignored in the United States: intellectual culture.

Firstly, the change in Quebec was not a matter of 1968—it was in full swing with what was and is still called the Quiet Revolution, beginning in 1960. But even that came 12 years after Le Refus Global of 1948, a manifesto against clerical connivance with capitalist domination, signed by the painter Paul-Emile Borduas and other important artists and intellectuals.

Ultimately, the Québecois hostility toward the church can be traced to the British settlement, by which only Catholic clergy were legally permitted to speak French.

Re “Correction Course” (11/14): Donald Lee has written a refreshing, honest and meaningful article about the desperate need for prison reform in the United States.

Mr. Lee is correct that recidivism rates are very high in most states; prisoners released today have at least a 60 percent chance of returning to prison within three years. The cost of maintaining one prisoner per year is so high. Clearly something must be done to alleviate this evil situation in our criminal justice system.

First, we need to set up drug treatment courts in all counties that would help addicts recover their sobriety. Second, we need educational programs in all prisons, as a way to help each prisoner discover his own sense of worth by pursuing a high school or college degree. Third, we need to incentivize businesses to hire recovered addicts and former criminals after they have served their time.

I am fortunate to volunteer at my local prison. Most of the prisoners I meet are youths who have made a mistake and need a mentor to advise them as to their life goals. I pray Mr. Lee will succeed in his new life goals.

The cleaning of two Jesuit churches makes a fine example of the spiritual journey we must all make in our life times. My own spiritual journey as an Episcopal priest has had its ups and downs. There have been the risks I have had to take, which were sometimes followed by disappointment and at other times by great joy. Like Father Martin, there are times I scaled the heights and found the view breathtaking and others when I found the change terrible. And yet, in retrospect, I can see that many of those changes were needed, and I can now rejoice in them.

Upon reading the thoughtful essay by T. Howland Sanks, S.J., “Fully Formed” (9/26), two issues stand out for me.

The first is his dismissal of “academic philosophy” as “no longer [giving] a broad understanding of the human condition.” It is true—as perhaps it has ever been—that the practice of some who teach philosophy in the academy can be so characterized, but it is a mistake to assume that in those groves nothing else can be found under the rubric “philosophy.” For nearly 40 years I taught in three different programs, including two in state universities. The fact is that there are still people in our discipline for whom the literal understanding of philosophy as the “love of wisdom” is meaningful. One just needs to know where to find such teachers.

The second issue is this: Father Sanks wisely notes it is problematic to be stressing a context that is geocentric and anthropocentric at a time characterized by awareness of the “new, post-Hubble cosmology.” But unfortunately, he omits any reference to another centered perspective that is at least as old as and arguably most damaging to our theology: androcentrism.

Thankfully, however, we live in an era where the consciousness-distorting view of a male-centered universe is not only recognized but rigorously critiqued by a multitude of scholars both here and abroad. To name just a small sampling of resources that can add both breadth and depth to seminary education, consider, for example: Catherine Mowry LaCugna's “Catholic Women as Ministers and Theologians,” published by America in 1992; the recently published book by Barbara E. Reid, O.P., Wisdom's Feast: An Invitation to Feminist Interpretation of the Scriptures; and the Liturgical Press's commitment to publish the Wisdom Commentary on the Bible.

Admittedly, some seminarians may find these feminist works unnerving. Such students perhaps could be eased into an encounter that, while painful, is necessary by their first reading Catholic Women Speak, the book incisively reviewed by America’s own Luke Hansen, S.J., in the 11/28 issue.

Our readers
Show Comments (
1
)
Comments are automatically closed two weeks after an article's initial publication. See our comments policy for more.
Anne Chapman
6 years 1 month ago
Boreta Singleton's comment brought back wonderful memories. I was a student at the Institut Catholique in Paris in the late 1960s, where Fr. Rivers was completing a PhD. He gathered up a lot of young American students and taught us his "American" mass, sung at the English language church in Paris, St. Joseph's. We were so caught up in his excitement, and how he was bringing so much life to a liturgy that mostly bored us to tears, made Sunday simply an "obligation" under pain of mortal sin. We had to fight to stay awake and pay attention during the pre-Vatican II Latin liturgies of our elementary and high school years. Fr. Rivers was such a delight as a person, and an inspiration as a priest. I can still sing some of the prayers of that mass - truly a joyful noise raised unto the Lord. We did not realize then that he was the first African American priest of his diocese, nor that he had never served in a white parish. We young white students did not think of the music as being confined to one culture, but as a glorious new way for all of us of all races and cultural backgrounds to worship God in music. Fr. Rivers to us was simply one of a group of remarkable young priests studying at the "Catho", young priests who opened our eyes to the promise of Vatican II. Sadly much of that promise was never fulfilled, because of the popes who followed John XXIII who did not see that the Holy Spirit was opening the church to a new flowering. As a result, much hope died, and millions of Catholics left the church. After reading this, I found an obituary online that summarizes the remarkable life of a remarkable priest. http://www.gilliganfuneralhomes.com/obituary/Rev.-Clarence-J.-Rivers/Cincinnati-OH/166670