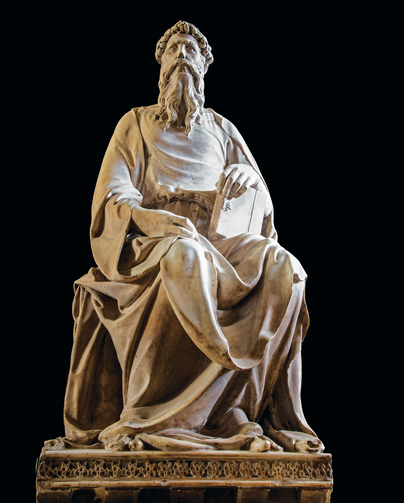 “Sculpture from the Age of Donatello” is like a dream from the dawn of the Renaissance now realized at the Museum of Biblical Art in New York City. While the Museo del Duomo in Florence undergoes a renovation that will amount to a recreation, MoBIA is the blessed recipient of 23 loaned pieces from the years 1390 to 1440 that thrill equally through their artistic quality and the insight they yield into how sculpture led the way into the reborn humanism of the age. The installation is magical, the sculpture, as it moves from the style of International Gothic to the threshold of the Renaissance, all but miraculous.

The story of MoBIA’s exhibition begins in the 1390s, a century after the construction of the Duomo began and while Giovanni d’Ambrogio was the capomaestro, or lead architect. The first two pieces we see are attributed to him, an almost life-size version of the Annunciation that enchants and instructs at the same time. Wearing a small crown and looking quite awed, Gabriel has been modeled on Hellenistic sculpture portraits, while Mary, with a gamin haircut and holding a small prayer book, derives (startlingly) from a Roman model for a boy. (One sees it especially in profile.) Meant for the tympanum of the Porta della Mandorla on the northeast side of the Duomo, the pair were actually placed inside that door on the altar of the Trinity, next to a famous “Double Intercession” in which Mary intercedes with her son and Jesus intercedes with God the Father.

Also created for the Porta della Mandorla are two reliefs meant for the vaulting of the door and two small statues of boy-like prophets. The reliefs, one a muscular Hercules, the other an expressive “Man of Sorrows” figure, are attributed to either Nanni di Banco or Donato di Niccolò di Betto Bardi, known as Donatello. The two rivals are also credited with the child-like “Profetinos” created for the pinnacles of the door. Nanni’s, holding a scroll that identifies him as a prophet, strides confidently forward, while Donatello’s, equally adorable, with a quizzical look on his face gathers his robe artfully about him but seems to be tripping on its hem.

And then suddenly, in scale and assurance, both artists bound forward with two immense figures for the main portal of the cathedral’s facade. Nanni’s “St. Luke the Evangelist” looks down to his left from the left side of the door, a noble Roman if ever there was one, with tightly curled hair, his Gospel book in his left hand and a grandly unfolding robe. Donatello’s “St. John the Evangelist” is more dynamic, his grave and majestic frowning face turned slightly upward to his right as if seeing a vision. His hands are enormous but would have appeared natural when viewed in their site high in the doorway. The classicizing “St. Luke” is memorable. But the newly interior, mysterious “St. John” is mesmerizing.

They would be reason enough to visit the exhibition. But two still greater works await, both by Donatello. The first is “Abraham and Isaac (the Sacrifice of Isaac)” on which Nanni di Bartolo assisted the master (though not, it is thought, significantly). The scene is familiar, but Donatello’s psychological urgency is utterly original. Slightly larger than life-size and clothed in a handsomely rendered garment, Abraham’s left hand has pulled back his son’s hair to bare the nape of his neck, and he holds his knife in his right hand. But that hand, you notice, has gone slack, and the knife is slipping down the shoulder of the boy. Filippo Brunelleschi had portrayed the scene with an angel staying the hand of Abraham, and Lorenzo Ghiberti had an angel delivering the message not to sacrifice the boy. Donatello shows just father and son in the moment immediately after the father has heard the divine reprieve. The meaning of the scene becomes more universal while remaining a revelatory symbol of the death and resurrection of Christ. (And the beautifully sculpted Isaac, it should also be noted, becomes the first life-size nude of the Renaissance.)

Donatello’s still greater masterpiece, ranking with the wooden crucifix in Santa Croce, the “St. George” in Orsanmichele, the “David” and the grand equestrian statue “Gattamelata” in Padua, is the over six-foot tall “Prophet,” identified often as Habakkuk and sometimes as Elisha but generally known as “Zuccone,” Pumpkin Head, because of his ovoid head. This lean, muscular figure with his bald head tilted slightly to the left, searching eyes and slightly parted lips, his right shoulder drawn down and back, a strong long right arm bare and thrust into his pocket, embodies, Msgr. Timothy Verdon tells us, Florentine prophetic self-identity. (Monsignor Verdon, director of the Florence Cathedral’s museum, organized the exhibition together with Daniel M. Zolli.) It embodies as well a perpetually searching, questioning humanity, and it is quite plausible, as Giorgio Vasari wrote in his Lives of the Artists, that Donatello, finishing the statue, ordered it to speak to him.

Like a slow musical movement following something tumultuous, Luca della Robbia’s marble reliefs on three of the liberal arts—rhetoric, dialectic and music—are well sited in the next bay of the show. They do not tax, but they surely delight, introducing us to a master teacher and his well-garbed students, two philosophers in debate (possibly Plato and Aristotle) and an indolent Orpheus (probably) strumming his lyre. Della Robbia had also made graceful reliefs for the Cantoria (or Singing Gallery) of the cathedral, but at MoBIA the works representing the Cantoria are a processional cross for which he provided the corpus and two large Hellenistic heads from Donatello and his workshop that would have looked down from the Cantoria (suggesting perhaps amazement) to the high altar below.

Three stone reliefs by a 15th-century artist known as the Master di Castel di Sangro, though lesser in quality, are nevertheless valuable additions to the exhibition, since they show the influence of Ghiberti, being based on three of his remarkable panels for the Baptistery on the themes of the Adoration of the Magi, the Flagellation and the Crucifixion. And for anyone who loves architectural models, what compares to the models here of the cathedral’s dome and its lantern, attributed to Brunelleschi himself?

There is a pathos to this thrilling exhibition celebrating MoBIA’s 10th anniversary. It will be on view through June 14, but in that month the museum will close, looking for new quarters. The American Bible Society, which has housed it until now, has sold its building and will move to Philadelphia. But “Sculpture in the Age of Donatello” will never be forgotten by the visitors it is now transporting to a time when a whole new view of humanity was being born. You can be there.