Relying on Each Other: Catholic couples discuss the realities of natural family planning. 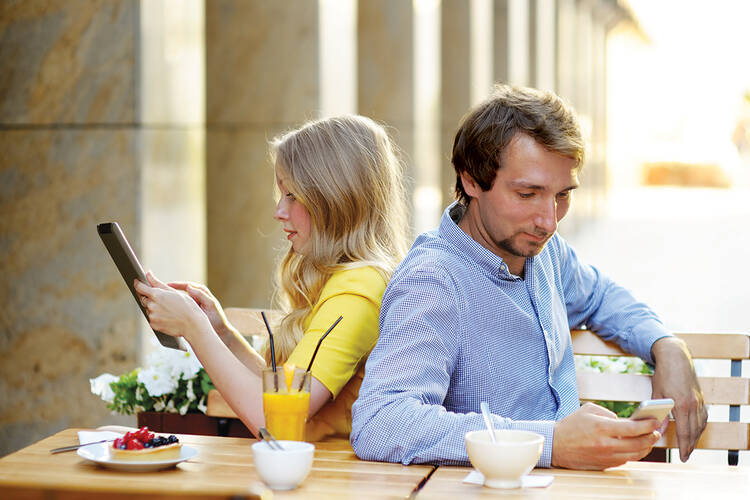 Pope Francis opened the Synod of Bishops on the Family with a call for open and sincere discussion of challenges facing the family, and in many ways, the synod delivered that. Yet transcripts of the testimonies given by the half-dozen married couples chosen to speak at the synod reveal that there was only a cursory discussion of the pastoral challenges involved in couples’ openness to life and of the serious struggles faced by couples who are striving to live out church teaching. The beatification of Pope Paul VI, seen by some as a canonization of his encyclical letter “Humanae Vitae” (1968), can lead to the feeling that all that is needed to foster a culture of life among Catholic couples is a thorough catechesis on the marital and spiritual benefits experienced by couples using natural family planning.

Notably missing from the synod interventions were the voices of faithful Catholic couples who embrace the church teaching on this issue but struggle as they continue to live it out. These couples could offer insight into the real challenges of spouses currently in their reproductive years. Many of these men and women struggle with ambiguous fertility signs, the marital strain of extended abstinence, the complications caused by medical conditions and poor finances, and even unplanned pregnancies, while following all the guidelines for their method of natural family planning.

For many, these struggles lead to crises of faith, and when they turn to their church communities for answers in handling unanticipated difficulties, they find little help or even understanding. In the past, these couples might have suffered in isolation. But now many have found a place to conduct these discussions on the Internet through blogs, private Facebook groups and other online forums. The members of these communities are well-formed Catholics. Most have read St. John Paul II’s writings on the theology of the body, as well as “Love and Responsibility” and the writings of Christopher West. They embrace the teachings of “Humanae Vitae.” These couples want nothing more than to put into practice the beautiful vision of married love described in church teaching, but they also desire a space to discuss the challenges to living it.

“A few times I cried myself to sleep over my [natural family planning] chart with my dismayed husband, unsure how to help me. Sex wasn’t an integral part of our sacramental love for each other; it was a rare treat that had to be compartmentalized.” This observation is characteristic of the struggles shared, mostly by women, in these online forums. While abstinence can be a tool for learning discipline, selflessness and communication, extended abstinence presents a serious challenge for many couples who practice N.F.P. Church documents assume that abstinence required in N.F.P. will be fairly short (seven to 10 days per cycle) and fertile periods clearly identifiable. For many, this is simply not the case.

Newlywed couples looking forward to intimacy in married life may discover that their wedding night or honeymoon falls during the fertile time of the woman’s cycle. If they wish to avoid pregnancy, the only option for them is to abstain. Learning marital intimacy takes time, as one woman shared, “Our first awkward attempts at intercourse failed because of my discomfort. Just when we started to figure things out, my fertile signs would appear and we’d have to abstain.”

Newlyweds are not the only ones who feel the chart limits and dictates their lovemaking. Spouses whose work requires extensive travel may find that their time at home together does not match up with the infertile time in their cycles, meaning that couples may regularly miss their window of opportunity to be together. Even couples without challenging work schedules will encounter times when anniversaries, birthdays, vacations or other times especially appropriate for intimate time together do not fall within the infertile period. In time, the responsibilities of raising children may also chip away at couples’ time for intimacy. Faced with this frustration, some couples choose to ignore method rules and then become pregnant in times of hardship.

The postpartum period and breastfeeding also require a high degree of abstinence because of hormonal shifts. The transition to parenthood requires new parents to lean on each other and, ideally, is a time for a couple to grow closer as they face the new challenge of raising a family. Couples using N.F.P. to space their children can find that precisely when they often desire sexual intimacy to remain connected to each other, it is frequently off limits. Many express the feeling that they have to choose between feeding their marriage and the good of their family as a whole.

Additionally, couples share that other factors make it difficult to accurately chart signs of fertility. Stress, irregular sleep schedules (common for new parents or people with variable work hours), certain medications, medical conditions and the transition into menopause make observing patterns in cervical mucus or temperature, both crucial to the N.F.P. process, less clear. Avoiding pregnancy in these situations means accepting extended abstinence, which for many is a damaging burden to their marriage.

The strain and increasing pressure of prolonged abstinence causes many couples to engage in sexual activities with each other outside of procreative intercourse. This leads some couples to feel guilt and confusion, since these activities are considered immoral, yet may bring much needed closeness in their relationships without the risk of pregnancy. Many couples report that the ban on these activities is the hardest part of church teaching to follow, as well as the hardest to comprehend. One couple shared, “We felt that the teachings which prohibit nonprocreative sexual intimacy also were a burden, as we wanted to be united with one another and bring pleasure to one another; however, we instead had to sacrifice the unitive, as we were not able to take on the procreative.” Another woman shared, “I feel trapped, not free about the rigidity of the rules of marital chastity. I feel that my sexuality, something that I thought was my gift to give to my husband, is limited.”

Health problems also can complicate the use natural family planning. Women with hormone abnormalities often experience complex cycles. While charting can help a woman identify health issues, many women do not have access to health care professionals who are able to provide affordable solutions consonant with Catholic teaching. Second, N.F.P. is especially stressful for couples who know that pregnancy would bring a grave health risk. For example, women who experience health conditions while pregnant or who find that pregnancy exacerbates an unrelated condition must rely on N.F.P. if they wish to morally avoid pregnancy, even if they have found it to be ineffective. In extreme cases, a Catholic woman might use natural family planning to avoid pregnancy because another pregnancy would probably kill her. The only alternative offered by the church is complete abstinence until menopause.

The financial burdens facing many young families raise the stakes for couples practicing natural family planning. In the statement of the U.S. Conference of Catholic Bishops for Labor Day 2014, Archbishop Thomas Wenski of Miami said that “meaningful and decent work is vital if young adults hope to form healthy and stable families,” and noted that young adults disproportionately bear the burden of high poverty and unemployment, with an unemployment rate more than double the national average. Many young people find themselves strapped with crippling student loan debt and unable to find decent work.  “It seems that N.F.P. (when practiced to avoid a pregnancy) is something that has far more serious consequences for those of us who are financially unstable,” one woman wrote. “A couple whose head of household makes $60,000 and owns a home with several bedrooms faces far fewer challenges with an unplanned pregnancy than someone such as myself, who has $60,000 of combined student loan debt with my husband, an income of far less, and a tiny apartment. We make just enough to pay rent and buy groceries.”

Promoters of natural family planning cite method effectiveness rates comparable to other methods. But many users are disappointed when, despite diligent adherence to method rules and regular follow-ups with trained practitioners, they find themselves facing an unintended pregnancy. This is a matter of trust. Couples who need to avoid pregnancy should be able to rely on their chosen method. Many feel deceived by the church about the efficacy of natural family planning, and often experience a crisis of faith over whether to continue with natural family planning or go against church teaching and rely on artificial birth control.

More than anything, the couples in these online forums want to be seen and heard by their pastors and their bishops. Many had hoped that their struggles would be discussed during the first session of the synod. Now, in this year between the two sessions of the synod, their hope remains that the synod fathers will consider that for many people, living out this teaching is more stress-inducing than lifegiving. These issues demand not a mere reaffirmation of current teaching, but frank discussion and new pastoral solutions in keeping with Pope Francis’ vision of a merciful church, which walks with people as they face the challenges involved in being family.