How much money does religion generate in the United States? 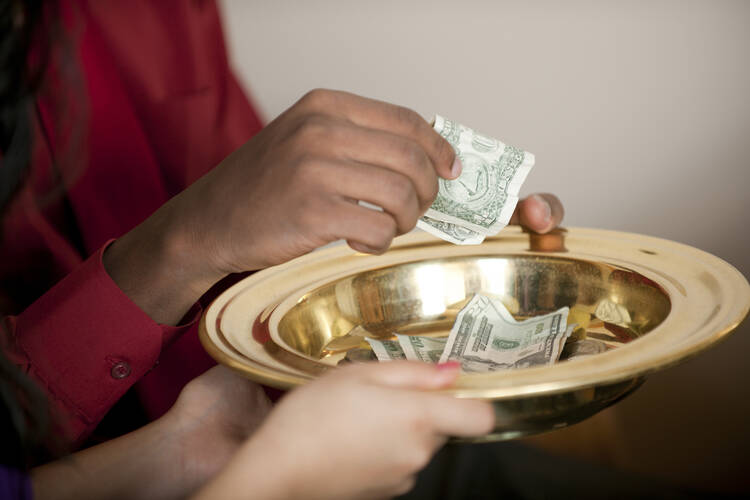 Can you put a dollar value on religion?

One Georgetown University researcher has attempted something close to it, releasing findings from a study that says organized religion and behaviors associated with it contribute, by one estimate, nearly $1.2 trillion to the United States.

Brian Grim, of the Religious Liberty Project at Georgetown University, unveiled on Sept. 14 findings of a study he conducted with Melissa Grim, of the Newseum Institute, and which analyzed the economic impact of 344,000 religious congregations, "from Adventist to Zoroastrians," around the country.

Depending on which factors one considers, religion contributes $378 billion, by the most conservative of estimates, and up to $4.8 trillion to the U.S. annually, Brian Grim said of the study sponsored by Faith Counts, a nonprofit organization of religious groups, whose aim is promoting the value of faith.

University of Pennsylvania professor Ram Cnaan, who also is program director for the Program for Religion and Social Policy Research at the school, said at the unveiling of the study that while some may consider putting a dollar value on religion a sacrilege, it's important to point out organized religion's benefits to society to balance out news about clergy abuse, extremism, fraud and other ills that are frequently reported on the news and that involve members of faith communities.

It's also important to consider the benefits of organized religion, the study said, when the U.S. seems to increasingly step closer to a more secularized society, such the one painted in the Pew Research Center study "'Nones' on the Rise," about the growing ranks of the religiously unaffiliated.

Cnaan, who said he is not affiliated with a religion, said he believes it's important to gauge, not if religion is important but how much it is important, in terms of its dollar value to society. That's because churches and other centers of worship benefit society, financially and otherwise, through schools, hospitals, charitable institutions, by providing certain social services and volunteer work that help people in need in their local communities.

Think of organizations, Grim said, such as the Knights of the Columbus, 1.9 million members strong, who have provided help to communities in distress, physically and financially, at a moment's notice.

Given increasing secularism, "think of what would happen if everyone in America woke up like me. I'm not religious," Cnaan said, encouraging others to ponder a society in which the many social and financial benefits of organized religion are no longer there because there are fewer or no church members left. Would others pick up the slack?

Grim said there are organizations that are not faith-based that do good works.

"We wouldn't see the good of society disappearing but it would be significantly less," he said.

William Galston, of Brookings Institution's Governance Studies Program, said the $1.2 trillion estimate Grim offered, is the "Goldilocks estimate," not too high and not too low, but consider what it means to have programs, people and services originating from a religious base that contribute to 7 percent of the country's GDP, he said. That's exactly what the study finds if you go by the mid-range estimate, he said.

"It's a sensible number to use as a baseline for national discussion," Galston said.

Cnaan said in his interactions with clergy and religious leaders, he sometimes finds people who are apologetic. But the study shows that they should be proud and should be a boost of confidence to all communities of faith in the U.S., he said.

"I wish I could have gone to every place and every people and say, 'Be proud, you're part of something very big and very important,'" he said.