Regarding Africa: A new exhibit explores race and the Renaissance

Regarding Africa: A new exhibit explores race and the Renaissance 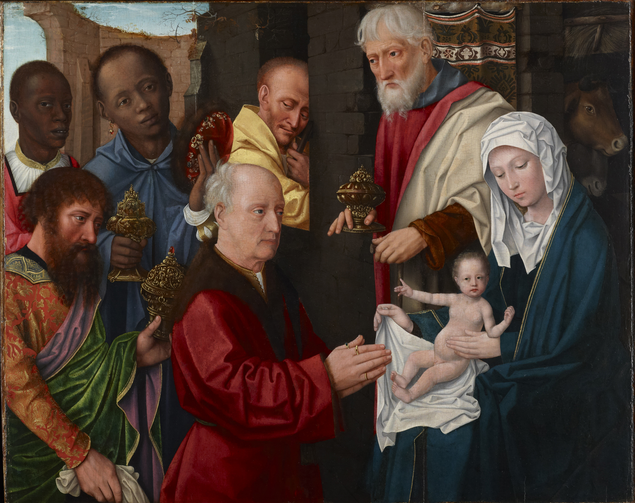 You’ve probably noticed that in many paintings of the Adoration of the Magi, the youngest of the three kings is a black man. You may know that this convention began in the last quarter of the 15th century, and also that “Balthazar,” as he came to be named, represented Africa, while the eldest king stood for Europe and the middle-aged king for the East. But did you ever wonder who stood as the models of “Balthazar” for artists from Hans Memling to Romare Bearden?

This question and many more about Renaissance Europe’s conception and experience of Africa comes to vivid life in a beautiful and deeply informative exhibition, “Revealing the African Presence in Renaissance Europe” at the Princeton University Art Museum. The show was organized with the Walters Art Gallery in Baltimore and first shown there. It includes over 65 paintings, sculptures, prints, decorative objects and manuscripts, and is on view at Princeton through June 9.

Princeton’s own “Adoration of the Kings,” from Gerard David and his workshop, opens the exhibition. Painted in Antwerp about 1515, the three royals are portraits from life. A white-haired gentleman kneels before the Madonna and child, having just given an even older Joseph his gift of gold. He is quite likely based on a Portuguese merchant active in the city, and the picture’s innocent “Balthazar” with his black servant probably belonged to the merchant’s household. (A more densely populated Italian “Adoration” of some 15 years later is also in the show, and Princeton has another Netherlandish “Adoration” from the same period in its permanent collection, both with black kings.)

Two maps vividly indicate what Europeans knew about Africa, one from 1493, when it was thought that the continent might be linked by land to Asia, the other from 1570, in which the map looks very much as it does today. In the intervening years, there had been significant movement of peoples. The Muslims, including many black Africans, had been expelled from Spain. Vasco da Gama in 1497 had sailed around the east coast of Africa, seeking a route to India. The Ottomans had begun to push into Eastern Europe and across North Africa, vying with the Portuguese Empire for dominance in the region. As the four continents of the world came to be personified, Africa was celebrated for “the astonishing novelty of her aspects,” as with Adriaen Collaert’s “Allegory of Africa” and its accompanying poem, c. 1588, in which a strapping nude woman rides a fearsome crocodile with obelisks (meant to be the pyramids) in the background. A Florentine bronze from about 1600 depicts an “African Man on Horseback Combating a Lion,” indicating Europeans’ grudging admiration for the strength and horsemanship of African men.

Famous African men and women and their stories, from Dido, Cleopatra and Hannibal to St. Anthony Abbot (represented in an exquisite etching by Albrecht Dürer), fascinated Europeans. But they did not expunge deep-seated prejudices. It was widely thought that humanity was created white, so that a black person was “discolored.” A chilling woodcut from 1548, entitled “The Impossible,” shows two men trying to “wash an Ethiopian” white (a trope known actually in ancient Greek literature). Dürer’s 1528 study of “Four Heads” includes an unflattering image of an African, though on another occasion the artist wrote that despite certain features some blacks are “so well built and handsome that I have neither seen nor can imagine something better.” (For an example of what he meant there is Aert Claesz’s “St. Philip Baptizing the Ethiopian Counselor” of 1524.) And indeed the show presents several pieces indicating a positive aesthetic of blackness—a Flemish (or French?) bronze of a “Black Woman at her Bath” from the 1580s, for example, or Orazio Mochi’s “Black Court Jester” some two decades later.

Changes in the slave trade represented a major development (and misery) in the course of “the long 16th century” (from 1480 to 1610) covered by the exhibition. In the mid-15th century the majority of European slaves came from the Eastern Mediterranean, Russia and the Caucasus. When slaves began to come to Europe from Western and Northern Africa, there was no market for them such as the one in Algiers. But Livorno in Italy served as a point of significant transaction, and Lisbon, with the largest black population in Europe (perhaps as much as 10 percent of the city), was another. A 16th century genre scene, probably by a Netherlandish artist, shows the Lisbon waterfront teeming with a vast range of blacks and their Jewish neighbors—slaves and petty criminals, dancers and a black knight on horseback—all gathered around “The King’s Water Fountain.” It is worthy of Brueghel.

At this point in the exhibition, with a compelling “Portrait of an African Slave Woman” (c. 1580s) attributed to Annibale Carracci, there is a subtle transition from the European context to portraits of individual Africans. It had become fashionable in European courts to have young black pages and servants (Titian was the first to depict the custom), and Princeton offers an endearing example in “Portrait of Domenico Giuliani and His Servant” (1579).

Apart from the context of the exhibition, some mixed race figures might appear to many viewers as white. Such is the case with the portrait of an unknown man by Tintoretto (c.1570 to 1600) from the Morgan Library and Museum and arguably the finest canvas in the show. It is still more true of Jacopo da Pontormo’s “Portrait of Maria Salviati de‘ Medici and Giulia de’Medici” (c. 1539), in which little Giulia, the daughter of Alessandro de’ Medici, duke of Florence from 1511 to 1537, was for a long time literally painted out of the picture. Nearby, in a stunning small portrait by Bronzino (after 1533), you can see the handsome Alessandro himself—thought to be the son of Cardinal Giulio de’ Medici and an African slave.

Europeans were fascinated by Africans of every class. The show includes two fine chalk drawings by Veronese of very ordinary Africans and a painting by Luis de Vargas of Christ about to be crucified that unusually includes a portrait of the donor, probably a freed man. Equally arresting is a Flemish (or German) tondo “Portrait of a Wealthy African” (c. 153-40) and the “Head of an African Man Wearing a Turban” by Rubens (c. 1609). If an African ruler could not visit Europe, at least his portrait could be in a royal gallery, and this mode of presence was avidly cultivated, most handsomely in Cristofano dell’Altissimo’s representation of the elegant King Dāwit III of Abyssinia (or Ethiopia) (before 1568).

The dialectic of encounter becomes increasingly evident in the course of the exhibition. Africans understood themselves in terms of the Europeans who enslaved them or traded with them, courted them or revered them as sages. Europeans came to see the world as a larger, stranger place, with exotic surprises that beguiled them. (The fashion for the exotic, though, somehow began to wane around 1610—for reasons that are not yet clear.) And so the show is both a visual delight and an education in what it means to be human, offering even more questions than answers. It began with research undertaken in 2000 on the Pontormo “Portrait” and is indebted to a conference on “Black Africans in Renaissance Europe” held at Oxford University in 2001 and to the “Black Is Beautiful” exhibition in Amsterdam in 2008. “The Image of the Black in Western Art” project, edited by David Bindman and Henry Louis Gates, Jr. at Harvard, has also been a major influence. But it is distinct in the material and organization that shows us how the encounter of the two continents challenged prevailing notions of color, class and human dignity.

It also has an absolutely thrilling climax in José Montes de Oca’s “St. Benedict of Palermo (the Moor)” of about 1734, an almost life-size, wooden sculpture and a masterpiece of 18th century Spanish realism. Born to African slave parents in Sicily, Benedict entered the Franciscan order and soon became famous for his wisdom and holiness. Here he is portrayed in a golden robe, startled and drawing slightly back (as the subtle rear motion of his left leg and the gentle turn of his body suggest). But before what? He seems to have been reading from the book in his left hand. Now his right hand is raised and a mysterious, furrowed expression covers his face. To me it is the awe of someone face to face with the Holy.

Beatified in 1743 and canonized in 1807, Benedict is easily the best known of all Renaissance blacks. We have no idea, however, how he actually looked. Nor did his prodigious sculptor. His ebony skin and elegant figure are entirely a fiction. Here the unforgettable presence of the saint reminds us again how much truer fiction can be than fact.