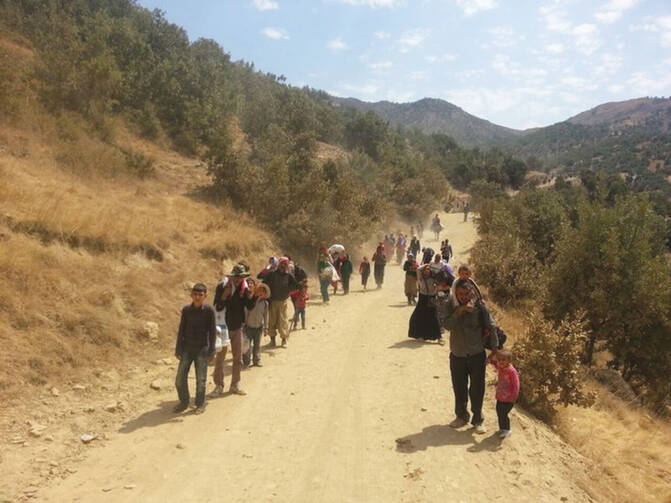 On Sept. 18, the Islamic State in Iraq and Syria began a military offensive outside of the Kobane area in northern Syria, and in no time they had terrorized and seized 60 of the surrounding villages. Over the next three days an unprecedented flight of 160,000 refugees escaped across Turkey’s southern border. The sudden exodus put the refugee issue back on the international diplomatic front burner, but this time, as one official noted, “The pot is now boiling over and the water is spilling onto the kitchen floor.”

Turkey already has more refugees than it can handle. Since the Syrian conflict started in March 2011, about 1.7 million Syrian refugees have escaped into Turkey. When ISIS took control of Mosul in June of this year, as many as 200,000 more Iraqis came, joining tens of thousands of Afghans, Iranians and others. Turkey has now become not only the borderland between Europe and Asia, but the borderland between the violence of the home countries of these refugees and the hope of a better life.

According to official Turkish estimates, the country has already spent $4 billion responding to the refugee crisis. The rest of the international community has added only $240 million to help Turkey in this effort. If the town of Kobane falls in the coming weeks, another 300,000 refugees could flee across the Turkish border. In addition to the Muslim Arabs who came over in earlier waves, now many Kurds, Yazidis and Christians are fleeing for their lives because of the violence in their homelands.

I was part of a delegation with the Migration and Refugee Services of the United States Conference of Catholic Bishops in late September; we heard stories from refugees at the Turkey-Syria border about the reasons they left their homes behind. One Christian Iraqi woman told us, “ISIS came to my village and said either convert or die!” Another left after a neighbor received a package at her doorstep that contained the head of a relative, forcing the whole family to flee in fright.

Only 13 percent of the refugees in Turkey are living in government-run camps. The vast majority have moved into Turkish cities, and, as generous as the current state institutions in Turkey have been, they do not have the mechanisms needed to meet the massive social challenges created by the refugee population. Many recently arrived Iraqi refugees we talked to could not even get an appointment to begin refugee status determination until 2023.

For many refugees, making it across the border into Turkey is only the first step. Complicated issues lie ahead that will involve either integration, return or resettlement. “We are safe in Turkey now,” said one Syrian woman, “But our situation is bad. We feel weak, we have many needs, and many people still don’t understand what we have lived through.”

As world leaders gathered at the United Nations in late September to address ISIS, Ebola and other global threats, I asked a number of refugees what they would say to them.

One teenage girl said, “We feel insecure, and we want you to help make a stable future for us. Please pay attention to what we are going through. All we want is to live in peace again.”

A Syrian man who teaches refugee children in Turkey said: “The Syrian war has gone on too long. We want to go home. We want to return, rebuild our schools and teach our children.”

For those who have been in Turkey as refugees for some time, the feeling of displacement only adds to the agony. In addition to losing his ability to walk because of the fighting, one 25-year-old man said, “What you learn as a refugee is that when you lose your home country, you lose something very precious.”

When asked what they missed most about home, some children pointed to neighbors, friends and their school. But one 12-year-old, notably perplexed by the question, chimed in and said, “I don’t have a house any more.”

Many Iraqis we talked to could not imagine going back home. “Would you? We can’t go back. There is no peace.” Because they know firsthand the effects of rejection and violence, some refugees told us that respect—mutual respect—has been one of the most important things they have learned through their suffering.

While the bombs continue to drop on the ISIS infrastructure, these stories remind all of us that an enormous humanitarian battle still needs to be waged. In a statement on Sept. 23, Pope Francis said the theme for next year’s World Day of Migrants and Refugees is “Church without frontiers, Mother to all.”

He said, “The mission of the church, herself a pilgrim in the world and the Mother of all, is thus to love Jesus Christ, to adore and love him, particularly in the poorest and most abandoned; among these are certainly migrants and refugees, who are trying to escape difficult living conditions and dangers of every kind.” Moreover, his remarks further illumine an understanding of the church as a “field hospital,” whose mission must be inextricably intertwined with the poor and suffering of the world.

The generous response of the Turkish government, their willingness to adopt magnanimous protection policies and their welcome of these refugees as brothers and sisters in spite of enormous social and financial costs is one bright light in this overwhelming humanitarian crisis. Its leaders have prioritized hospitality over hostility, humanitarian costs over political costs and human solidarity over national and personal fears, even as it tries to manage risks to Turkey’s own security. In some parts along the Turkish border, ISIS-controlled territory is only a few kilometers away. Nonetheless, there is an unflinching recognition on the part of Turkish officials that helping these refugees is a moral imperative, even if it is difficult, costly, unpopular and risky.

This approach stands in sharp contrast to many U.S. immigration policies and our animosity to those suffering on the other side of our borders. Although the United States has made great strides in refugee resettlement in recent decades, its immigration policies could be more generous and accommodating, especially for those most threatened. Having delayed taking executive action on immigration reform until after elections in November, President Obama was unable to negotiate a humane accommodation for the surge of nearly 63,000 unaccompanied children crossing into the United States from Central America because of the political risks involved.

Worldwide, refugees are the most insecure and vulnerable human beings today. And this issue is not going away anytime soon. The bigger challenge is not just when these refugees will go back home, but how we will learn to live together in our differences, strengthen each other in our suffering and walk together in a common hope.

When our delegation asked a tent full of refugee children what they would say to the president of our country, one 6-year-old—who had undergone much violence himself—paused a moment. Realizing a group of foreigners had just crossed over his borders and entered into his tent space, he raised his hand. As if to answer a deeper, but unasked question, he said, “This place is much more beautiful because of your presence in it.”

Daniel Groody, C.S.C., a consultant to the U.S.C.C.B. Committee on Migration and Refugee Services, is reporting from the Turkish-Syrian border.