Skip to main content
Signs Of the Times
March 25, 2013 issue 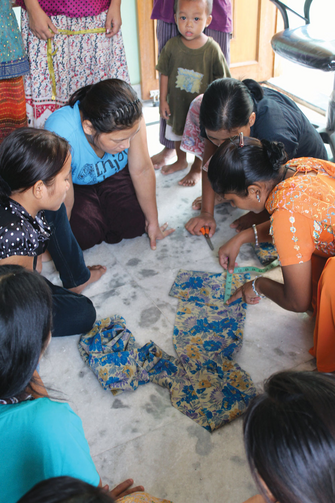 For the single women in New Delhi’s Chin community, harassment is part of daily life since they arrived in India from Burma. “Yes, men touch us,” they say. “Men grab us when we walk to the market.... Men tell us we owe them our bodies for coming to their country.” Women seeking refuge in New Delhi have fewer ways to report sexual harassment and assault without language skills, resources, knowledge of their rights or legal status. There are currently 20,000 refugees in the city, 12,000 of them from Chin State, the poorest region in Burma.

The U.N.-funded Don Bosco Center provides language and livelihood education to adults and informal schooling to young people in the city. The Jesuit Refugee Service began working in the Chin community in 2011, providing tailoring training to refugee women. At a garment factory they might take home 2,800 rupees ($55) in a month, but J.R.S. staff members hope the young women can earn a living tailoring at home with new sewing machines and skills.

This is an issue not only of income but also of safety. Without enough money to go to the market, most Chin women forage for food after midnight, when the markets have closed and unwanted vegetables have been discounted or discarded. Some go in groups for protection, but that does not always help.

“Delhi is not safe for women; we always get sexually harassed. Local teens brush against us and harass us in little ways. People steal from us. I need to go to the market to get discarded vegetables after 11 p.m., but I know I’m risking getting sexually harassed by local men,” said “Elizabeth,” a single mother who now earns money knitting baby clothes on a machine rented from the Don Bosco Center.

After the rape and murder of a 23-year-old Delhi woman in December, the city saw dozens of mass protests. Legislation to reinstate India’s fast-track court for rapists is now being considered. There is also talk of changing the penalty for rape to death and of prosecuting younger offenders. There are no statistics on sexual violence against refugee women in India. Often these crimes go unreported.

“This is an issue that affects every woman in Delhi,” said Rini, a Burmese Women’s Development volunteer. “Indian women get groped all the time. I’m Indian, so at least I can talk back to the guy or go to the police. But refugee women can’t talk to the police. If they do, the police don’t listen, and they feel more marginalized.” An investigation in 2012 of 30 police officers found that 17 of them blamed the victim.

“Margaret” fled Chin State when she was 17, crossing the border to India’s Mizoram State, where more than 110,000 Chin people live. She came to New Delhi because it is the only city in India where asylum seekers can register with the United Nations and receive some semblance of legal protection. Now she says Delhi is too dangerous, and she and a friend want to return to Mizoram to work on a farm until it is safe to return to Burma.

They will earn substantially less money, but they say they will have a safe community and know their neighbors. “I truly thought it would be safer here than in Burma. Now I don’t know,” Margaret said.

This article also appeared in print, under the headline “Refugee Women Especially Vulnerable to Sexual Violence,” in the March 25, 2013, issue.

Molly Mullen is the international communications consultant for the Jesuit Refugee Service.