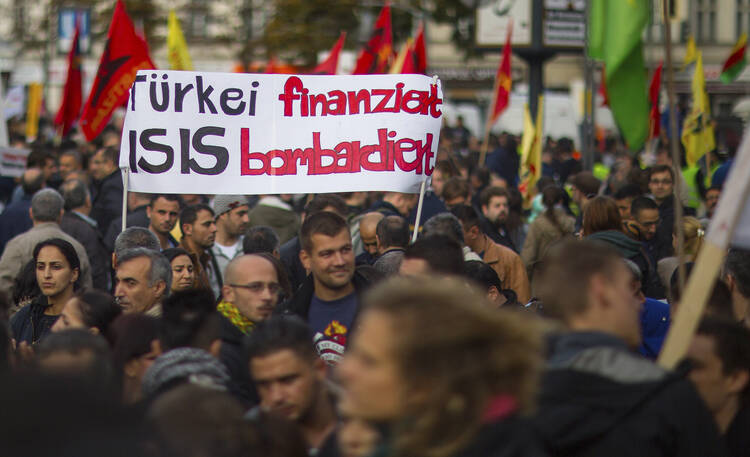 More than 100 Muslim leaders—clerics and laypeople alike—have signed on to a letter criticizing the Middle East Muslim military group ISIS, short for the Islamic State of Iraq and Syria.

In the 17-page letter, the leaders quote extensively from the Quran, the Muslim scriptures, to rebuke ISIS' tactics and actions.

Since the letter was issued Sept. 19, more than 125 Muslim leaders around the world have signed the letter. Twenty of them come from the United States, where the Council on American-Islamic Relations circulated the letter.

Among the letter's many condemnations of ISIS is its treatment of Christians.

"Regarding Arab Christians, you gave them three choices: jizya—poll tax—the sword or conversion to Islam. You painted their homes red, destroyed their churches, and in some cases looted their homes and property. You killed some of them and caused many others to flee their homes with nothing but their lives and the clothes on their backs," the letter said.

"These Christians are not combatants against Islam or transgressors against it, indeed they are friends, neighbors and co-citizens. From the legal perspective of Sharia (Islamic law) they all fall under ancient agreements that are around 1,400 years old, and the rulings of jihad do not apply to them."

The letter's rebukes did not stop at Christians.

"You have killed many innocents who were neither combatants nor armed, just because they disagree with your opinions," it said.

"Emissaries have a special inviolability," the letter noted, adding journalists are "emissaries of truth, because their job is to expose the truth to people in general. You have mercilessly killed the journalists James Foley (a Catholic) and Steven Sotloff (who was Jewish), even after Sotloff's mother pleaded with you and begged for mercy. Aid workers are also emissaries of mercy and kindness, yet you killed the aid worker David Haines. What you have done is unquestionably forbidden."

The letter said, "As for killing prisoners, it is forbidden in Islamic law. Yet you have killed many prisoners including the 1,700 captives at Camp Speicher in Tikrit in June 2014; the 200 captives at the Shaer gas field in July 2014; the 700 captives of the Sha'etat tribe in Deir el-Zour—600 of whom were unarmed civilians; the 250 captives at the Tabqah air base in al-Raqqah in August 2014; Kurdish and Lebanese soldiers; and many untold others whom God knows."

By the same token, the letter noted, Mohammed, Islam's founder, "over a span of 10 years and 29 battles ... did not execute a single regular soldier; rather, he entrusted that they be treated with kindness."

Another religious minority in Iraq subject to ISIS' persecution are the Yazidi. "They neither fought you nor Muslims. You considered them Satanists and gave them the choice to either be killed or be forced into Islam. You killed hundreds of them and buried them in mass graves. You caused the death and suffering of hundreds of others. Had it not been for American and Kurdish intervention, tens of thousands of their men, women, children and elderly would have been killed. These are all abominable crimes," the letter said.

"You have coerced people to convert to Islam just as you have coerced Muslims to accept your views. You also coerce everyone living under your control in every matter, great or small, even in matters which are between the individual and God."

The letter also took ISIS to task for making children "engage in war and killing."

"Some are taking up arms and others are playing with the severed heads of your victims," it continued. "Some children have been thrown into the fray of combat and are killing and being killed. In your schools some children are tortured and coerced into doing your bidding and others are being executed. These are crimes against innocents who are so young they are not even morally accountable."

The letter also condemned the ISIS militants for not only having "mutilated corpses" but also for putting the "the decapitated heads of your victims on spikes and rods and kicked their severed heads around like balls and broadcast it to the world. ... You jeered at corpses and severed heads and broadcast these acts from the military bases you overran in Syria."

The militants "have provided ample ammunition for all those who want to call Islam barbaric" by broadcasting their "barbaric acts, which you pretend are for the sake of Islam," it said. "You have given the world a stick with which to beat Islam, whereas in reality Islam is completely innocent of these acts and prohibits them."

The letter also accused ISIS of engaging in what could be described as cafeteria Islam. "It is not permissible to constantly speak of 'simplifying matters,' or to cherry-pick an extract from the Quran, without understanding it within its full context," it said.