Rafael’s Story: Remembering the stranger we are commanded to love 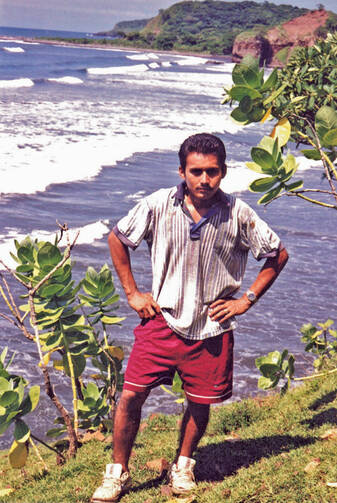 We met Rafael’s battered body in Capulín, El Salvador, where the dusty road out of the parish of Chirilagua reached its highest and widest point. From there, one can survey the western part of the 200-square-mile parish: the cornfields climbing steep, deforested mountains and mud and stick huts dotting the deep valleys, surrounded by pyramid-shaped volcanoes jutting up from vast ancient flood plains blanketed by the sugar cane and cotton fields where so many underpaid serfs work from sunup to sundown under the relentless and brutally hot tropical sun. Not too many days before, a young and vibrant Rafael had passed by this very spot, eager for a new life of promise in El Norte. But on this day, weighed down by hearts heavy with grief, we gathered together as a parish family to meet the “hearse,” a beat-up old pickup truck that would bring home our young friend’s lifeless remains.

I first met Rafael while directing a young catechists’ retreat. With only 50 or so priests for a population of nearly two million Catholics, the Catholic Church in this diocese in El Salvador exists because of catechists like Rafael—faith-filled, dedicated and committed young men and women who deeply love God and the church. Rafael had a joyous, exuberant personality that attracted many of his young companions, and I was delighted when he sent them to be trained as catechists alongside him. One day Rafael asked me if he could borrow our Spanish-language recording of “Jesus of Nazareth” (1977), by Franco Zeffirelli, to show in his village. He was certain that all the jóvenes, or teenagers, in the town would come the following Saturday to the little chapel to watch it.

His little town along the Salvadoran coast had recently acquired electricity, and a stateside relative of one of the townspeople had donated a small television set and a video cassette player to the local Catholic chapel. I hesitated to lend out the valuable video, but he assured me, with his broad, toothy grin, that he was very responsible; and he promised to return it the following Sunday, when he would walk the four hour round trip on foot through the mountains to attend morning Mass at the parish church, his weekly custom. Something inside told me to take the risk and, sure enough, after Mass the following Sunday, Rafael spotted me out to return the video in person, showing me his customary smile. “See, Madre,” he said, “I told you, I’m very responsible. And, just as I said, all the jóvenes came to watch it. We had a great time together!”

Indeed, he was a very responsible young man. He felt a deep sense of responsibility for his widowed mother and younger siblings, whose daily diet consisted of meager portions of corn, rice and beans. Like so many others in their village, they lived in a very simple house, with a dirt floor, a tin roof, and mud and stick walls. Rafael did his best to help his mother make ends meet, but with El Salvador’s unemployment rate of 20 percent, underemployment rate of 70 percent and the low wages given those who did have jobs, he knew he did not have many options in his homeland. But if he could find work in El Norte, he could send money home each month so that his family would have enough to eat and maybe, over time, even build a real home with a cement floor, cinder block walls and a tile roof.

Immigrants from places like El Salvador and Mexico would love to come to our country legally. They would prefer it. Legal travel is much more comfortable and far less expensive than illegal entry. And it carries far fewer risks. The problem is that U.S. embassies make it very hard for all but the well-to-do to travel to the United States. First of all, one must pay $100, just for an appointment in the embassy. This does not include the visa. And most are turned away, but only after the embassy collects the $100 appointment fee. Those not turned away are people with hefty bank accounts. Those without a visa have to choose between unemployment and underemployment in their native land—and the hunger that goes with it—or a 21st-century version of indentured servitude in the United States where they work at sweatshops until they pay off the coyotes’ exorbitant travel fees of $7,000 or more—money no one has, of course. But for these migrants, exploitation as underpaid indentured servants in the United States is preferable to hunger in their native land.

To be sure, my young catechist friend Rafael wanted to come to the United States legally. With visa, he would have to pay only about $500 for a flight to Miami, Los Angeles or Houston. But, of course, he had no bank account, and no bank account meant no visa. As he saw the worry grow on his mother’s face as she tried to find enough to feed her young brood, he knew his family’s best chance for survival was for him to find a job in El Norte. He had heard from others that people in El Norte earn in one hour what Salvadorans earn in one day, around $3.00. Rafael also knew the risks. But the skinny faces and distended bellies of his little brothers and sisters urged him on. When the word got out that the coyote would be coming soon to take people up to El Norte, Rafael made plans to leave.

Although the coyotes charge thousands of dollars to guide their clients to a new life in the North, the journey the coyote offers is fraught with many dangers and takes days, even weeks. Travelers can face extremes of weather, bandits, hunger, thirst, insects and rodents; often the modes of transportation are unsafe, even hazardous. Rafael was stuffed along with too many others in the back of a small, open pickup that sped through the night along a lonely mountain road.

The little truck had just crossed over the border between Guatemala and Mexico when it hit a rock and overturned, sending its occupants flying in all directions. Rafael took a hard hit to the back of the head and died shortly after. A local Mexican charity group affiliated with the church was going to bury him until contact was made with his family, and his neighbors sold their cows—their source of milk and cheese—to raise the funds to bring his body home to El Salvador. Everyone in his hometown loved him dearly and could not bear the thought that he would be buried as a stranger in a strange land.

Years later, after I returned home to the States, I went to work toward a graduate degree in biblical studies at a large Catholic university in the Midwest. There I took a doctoral course on Leviticus with students much younger than I. At one point in the course we studied and discussed Lv 19:34, which reads: “You shall treat the alien who resides with you no differently than the natives born among you; you shall love the alien as yourself; for you too were once aliens in the land of Egypt. I, the Lord, am your God.”

My young classmates argued over the meaning of the Hebrew grammar of this verse. One of them queried: “Does the Hebrew verb kamoka mean to love the ger (stranger, alien or immigrant) ‘as yourself,’ or ‘as one like yourself’?” As I listened to the class discussion about grammer, the smiling face of Rafael came to mind. He would have been the age of many of my classmates. He, like them, had dreams and hopes for a brighter future. His dreams and hopes were different from theirs—as students, they already possessed more than he could ever dream of—but he had dreams and hopes, nonetheless.

Remembering Rafael, and many other Salvadoran catechists like him, I could not help feeling some disappointment that the discussion on loving the immigrant among us, as commanded in Leviticus, was so focused on the level of grammar. The meaning of kamoka was obvious to me; its ambiguity included both meanings. I knew this because I personally knew people like those referred to by the Hebrew word ger. And I knew why a ger would leave his or her beloved family and homeland to become a stranger in a strange land, and even risk dying as one. Many, like Rafael, never make it to their destination. And those who do are often exploited, abused and denied basic human rights.

As our nation debates immigration reform, some of us presume that undocumented immigrants are criminals who could have come to this country legally but chose not to. Many fear that these “criminals” are “terrorists.” These presumptions and fears are not, of course, rooted in reality. In fact, those involved in the terrorist attacks of Sept. 11, 2001, were able to come here legally because they had financial resources. They paid all the fees—from the hefty appointment fee in the embassy to visa fees. They did not come from single-room mud and stick huts with dirt floors—with a dream for honest employment and a brighter future. Nor did they risk their lives to get here. Instead, they came to this country comfortably and safely by airplane.

As Catholics in the United States, we are challenged by our Scriptures to remember the ger among us and the admonition, as the people of God, that we not look away, harden our hearts or close our borders. Instead, we are told with all the firmness of the biblical command: “You shall treat the alien who resides with you no differently than the natives born among you; you shall love the alien as yourself; for you too were once aliens in the land of Egypt. I, the Lord, am your God” (Lv 19:34).

Lisa Marie Belz, O.S.U., a member of the Ursuline Sisters of Cleveland, is an assistant professor of religious studies and graduate ministry at Ursuline College in Cleveland, Ohio. She served on the Cleveland Mission Team in El Salvador from 1995 to 2001.