Race and Grace: A classic by Flannery O’Connor comes to life. 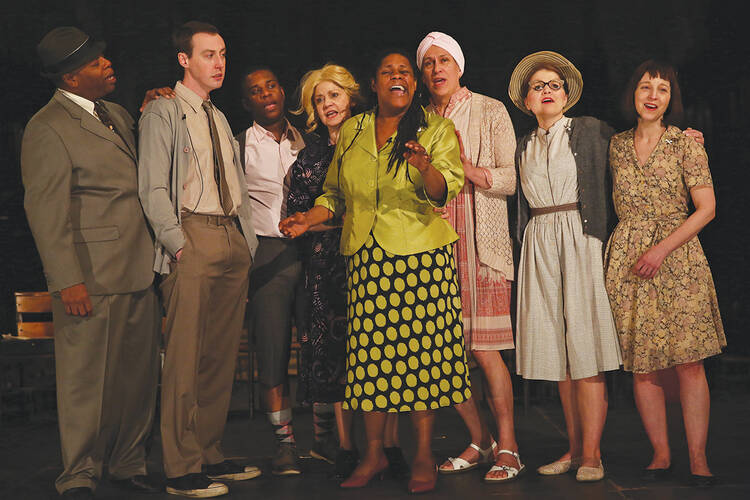 One recent Saturday night, in the grand space of the Cathedral of St. John the Divine in Manhattan, a small troupe of actors performed a dramatic enactment of Flannery O’Connor’s story, “Everything That Rises Must Converge.” The audience gathered in the hushed space of the church sanctuary seemed as wary as I. The story, written by a white Southerner in 1961 at the height of the civil rights movement, dares to address racial hatred and prejudice in all its ugliness. We were a varied audience that night—white and black, old and young, male and female—attesting to our enlightened times. And I suspect we were all asking ourselves the same question: 54 years after it was written, what does this story have to say to us now, in this moment, about race in America?

Karin Coonrod, artistic director of the Compagnia de’ Colombari theater company, selected O’Connor’s story on account of its “quicksilver dialogue which begs to be spoken aloud and played out on a stage.” But Coonrod was also moved by “the prophetic gaze of the writer.” In fact, the script for the production is simply the text of O’Connor’s story, spoken word for word by the various actors, their varied voices drawing the audience from one line to the next.

Mired as O’Connor was in her own time and circumstance, the story transcends her limitations and imagines a variety of perspectives on race—an issue that has torn families, neighborhoods, cities and our country itself apart from its very beginnings and, as events of the past year have demonstrated, continues to do so. While the story addresses the painful division between blacks and whites, it also holds out the possibility for unity, in both the here and the hereafter.

The main characters are a mother and son who hold profoundly different attitudes toward people of color. Julian (played by Christopher McLinden) is an educated young man with progressive ideas. Barely able to tolerate his mother’s racism, her pride in her patrician past and her nostalgia for the days of slavery, he suffers from a martyr complex, imagining himself a modern-day St. Sebastian. Julian, however, is no saint. Though his mother (Jaqueline Antaramian) is guilty of racial sin, she is devoted to her only child, having raised him alone and made sacrifices so that he could receive an education. For all her flaws, she is a good mother—a fact he strangely resents. His habit of challenging his mother’s outmoded ideas crosses the boundary from self-righteous rhetoric into a form of sadism one evening en route to her exercise class.

O’Connor brilliantly sets the story on a city bus—the iconic space where Rosa Parks took her stand—and a space that is newly integrated, a circumstance still unfamiliar to whites and blacks in the south. On stage, it is a space represented only by a few chairs. The sparse set allows the audience to focus on the characters themselves.

While on the bus, Julian conceives an evil urge to “break her spirit” and undertakes a series of actions designed to mortify his mother. These consist mostly of lame attempts at creating camaraderie between himself and the black people aboard the bus, and they succeed only in embarrassing them and himself. (African-American characters in O’Connor’s stories know white condescension when they see it.) As for his mother, she is annoyed but impervious to the lesson he wants her to learn—until a large black woman (Ayeje Feamster) boards the bus with her little boy. The woman is wearing a hideous hat identical to the one Julian’s mother is wearing, presenting Julian with the perfect teachable moment when he might impress on her the apparent equality between the two women. (The floppy purple and green hats also demonstrate the production team’s remarkable attention to the details of O’Connor’s description.)

The bus ride makes for compelling drama as each character suffers the uncomfortable scenario. Julian schemes and dreams. Julian’s mother sits apart, visibly wounded at his seeming betrayal. The large black woman is described as “a giant of a woman. Her face was set not only to meet opposition but to seek it out.” All of these varied attitudes and actions transform this ordinary bus into a microcosm. As the actors bring the scene to life, the stage becomes a mirror and the characters reflections of ourselves—flawed people afflicted by prejudices, angers and fears. No one is a paragon of virtue, black or white. In fact, everyone is behaving badly.

There is one exception, however—the child of the large black woman. The little boy, Carver, played by an adult in the stage production (Carlton Terrence Taylor), is enamored of Julian’s mother (who loves children, black and white), sits beside her, attempts to cuddle and initiates a game of peek-a-boo. Their interaction is the only generous human behavior we witness, and its charm lends sweetness and humor to this otherwise purgatorial bus ride. We are much amused, but Julian and the boy’s mother, disgusted by this outbreak of amity, seethe with rage and frustration. Clearly this moment of gratuitous joy cannot last, and comedy soon turns to tragedy. When they all get off the bus at the same stop, Julian’s mother offers the boy a penny—a foolish gesture of noblesse oblige—and the boy’s mother punches the old lady, leaving her stricken on the sidewalk.

On first reading, it might seem that what destroys Julian’s mother is the violent attack by the large woman, who represents the rage of the whole black race, according to Julian. However, it becomes painfully evident in the staged performance that it is Julian’s cruelty toward his mother that kills her. Taking the side of her attacker, he goads and taunts her until she dies of a stroke.

As Julian becomes terribly aware that he has been the instrument of her death, we can see in the actor’s face that his high-minded thinking about racial equality evaporates, being the pure abstraction that it was. In choosing the idol of an idea over the physical embodiment of love his mother represented, Julian has been living in his head instead of the real world. Though the story doesn’t offer any practical solutions for racial divisions, it clearly demonstrates that one cannot heal the sins of slavery, segregation and racism by sacrificing one’s mother on the altar of social progress.

O’Connor’s story ends with Julian’s rite of passage into “the world of guilt and sorrow,” but the dramatic performance offers us something more. The cast of eight actors, who have for the last hour been engaged in conflict, slowly draw together on the stage and begin to sing the hymn “Be Still My Soul.” Ayeja Feamster’s deep contralto initiates this song of courage and consolation in the face of suffering. Gradually the others enter into the song, whose sound grows stronger with each voice and verse, culminating in the powerful final lines, “Be still my soul,/ When change and tears are past,/ All safe and blessed/ We shall meet at last.”

Black and white, parent and child, man and woman, old and young—all gradually blend into a harmonious whole, offering us a vision of another kind of existence—one wherein wounds are healed, sins forgiven and hatreds transformed into love. This is the foretaste of heaven promised in the story’s title, a redemptive vision created by art—the brilliant blend of story, drama and song. All have suffered but have slowly risen up from the social sin that brought them low, and the many have converged into one earthly, heavenly choir. The fact of race, which has served as a source of sorrow in America—from slavery days through civil rights, from Staten Island to Ferguson—becomes “at last” a gift and a grace.

Angela Alaimo O’Donnell is a writer, professor and associate director of the Curran Center for American Catholic Studies at Fordham University. She is the author of a new biography, Flannery O’Connor: Fiction Fired by Faith.