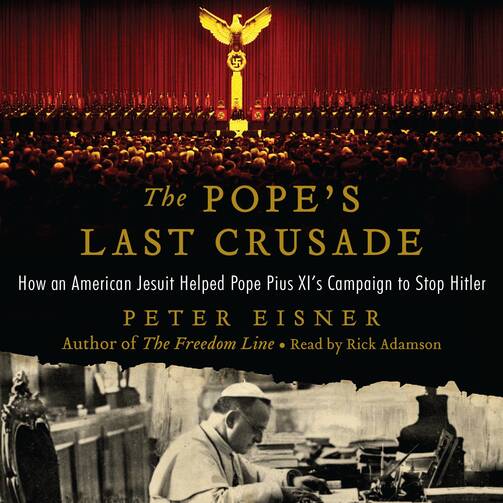 In the epilogue of his latest book, The Pope’s Last Crusade: How an American Jesuit Helped Pope Pius XI's Campaign to Stop Hitler, Peter Eisner offers an interesting insight on the men who held the seat of Peter during the 20th century. Of the seven pontiffs that were elected during that time, six are either beatified or being seriously considered for beatification. The only pope not to have a cause initiated on his behalf is Achille Ratti – Pope Pius XI. This aspect of the papacy in the last century will confound the readers of Eisner’s book. Of all the men that are depicted in Eisner’s account (Eugenio Pacelli, Wlodimir Ledochowski and several others in positions of power within the church), only Pius XI was courageous enough to speak out against the programs of racial discrimination in Germany and Italy. Only Pius XI infuriated Hitler and Mussolini by his public statements against the vicious anti-Semitism of the two Fascist leaders. Only Pius XI concluded that Fascism was a more immediate and malicious threat to Christian Europe than Soviet communism. Lastly, in the final days of his life, Pius XI attempted to fight through symptoms of congestive heart failure long enough to denounce publicly Mussolini and Hitler, perhaps even to excommunicate them. In the end, Eisner offers one haunting sentence encapsulating Pius XI’s death, “He had died a day too early” (193).

We have just witnessed a conclave and the election of a new pope. Last month, after Benedict XVI departed Vatican City by helicopter, there was massive speculation as to who the next pope might be. Essentially, Eisner’s account is a snapshot of ten turbulent months in Europe: May 1938-March 1939, concluding with a papal election. After Pius XI’s death in February 1939, Eugenio Pacelli was elected pope on March 2 by a conclave lasting less than 24 hours. The 1939 conclave was as decisive as the one that elected Pope Francis, yet, as much as the current pope is an outsider, Pope Pius XII was the ultimate insider. Most Catholics are aware of the controversy surrounding Pius XII’s reign during World War II. Eisner’s work serves to bring Pius XII’s predecessor to light. Perhaps the Roman numerals are confusing, but once one reads Eisner’s work, there will be a clear distinction between XI and XII.

Three Jesuits figure prominently in Eisner’s story. The first is John LaFarge. Since his ministry as a young priest, LaFarge worked for civil rights in the United States. LaFarge’s book decrying racial injustice in the United States caught Pius XI’s attention in Europe, and the pope summoned LaFarge in June of 1938 while LaFarge was in Europe. John LaFarge later became editor-in-chief of America and a prominent Catholic witness in the fight for civil rights. He also served on the editorial board of the Catholic Book Club for a number of years. He is an important figure in the history of America. Second, there is Wlodimir Ledochowski, who was Superior General of the Society of Jesus from 1915-1942. Ledochowski manipulates both Pius XI and John LaFarge and succeeds in preventing anything to come of LaFarge’s work for Pius XI. In Eisner’s account, Ledochowski appears to be quite vile and conniving. He formed his own conclusions about the state of the world and the church’s correct response to the reality of Europe in 1938-39. He ultimately helped to dictate the church’s policy toward German and Italian Fascism and silenced LaFarge’s work by destroying it. Third, there is a German Jesuit, an academic named Gustav Gundlach, who collaborated with LaFarge in his work on behalf of Pius XI. Gundlach was quite aware of what might happen to LaFarge’s work if he brought it to Ledochowski before the pope. Gundlach had a healthy skepticism about the Superior General and was ultimately correct. Gundlach’s relationship to LaFarge is reminiscent of the relationship between Fowler, the cultured, skeptical European, and Pyle, the quiet American from Graham Greene novel about Vietnam in the 1950’s. Gundlach, perhaps, had a better understanding of the anti-Semitism of the European Church in the 1930’s – a hatred that did not simply emphasize a racial disparity, but was rooted ultimately in the understanding of Jews as the nation that rejected Jesus Christ. European anti-Semitism was also anti-Judaism. Certain elements of the institutional church cultivated such anti-Judaism. Perhaps, LaFarge was unable to realize the depths of hatred toward Jews within his own church – a question to consider, among the following three questions I offer below.

Please, feel free to comment on any aspect of Peter Eisner’s The Pope’s Last Crusade or respond to the following questions. I welcome all discussion.

1. Realpolitik is the notion that success in politics is determined by the clever manipulation of others and the shrewd and careful use of power to achieve one’s ends. Robert Caro’s multivolume biography suggests LBJ is a clear example of effective realpolitik in his work to guide civil rights acts through Congress. Do Pius XI and LaFarge ultimately fail in their noble efforts against Fascism because they do not effectively employ realpolitik to achieve their ends? Are Pius XI’s vituperative denunciations of Mussolini and Hitler ultimately ineffective because of imprudence? At the other end of the spectrum, do LaFarge’s naïveté and his earnest obedience to his Superior General ultimately render his own efforts ineffective?

These questions infer the question of obedience – especially on the part of a vowed religious.

2. What about the complexity of Europe in 1938-39: should we allow Pacelli and Ledochowski some slack? Should we consider the thorny realities of the Spainish Civil War, the military weakness of France and Britain, and the might of Stalin’s Soviet Russia? Were their inclinations toward Fascism completely unfounded?

3. Ultimately, does the reader of Eisner’s book sense in Pius XII, Ledochowski and others, the same inclinations that might be detected in the clergy sex abuse crisis at the end of the century: the institution must above all be protected?

Kevin Spinale
Show Comments (
1
)
Comments are automatically closed two weeks after an article's initial publication. See our comments policy for more.
Craig McKee
9 years 6 months ago
I did not know this: http://www.youtube.com/watch?v=0yaZWYNw0sc