The Pope in the Poncho 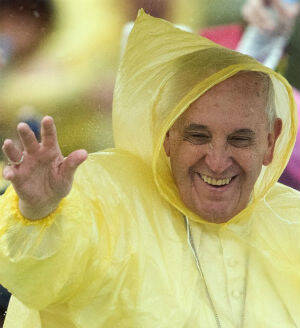 Pope Francis’ recent visit to the Philippines provided many memorable moments, but one in particular stands out: Francis celebrating open-air Mass on a stormy, wet and windy day at Tacloban airport, wearing a yellow plastic poncho over his vestments.

The decision to do so was entirely his. His advisors, both local and Roman, suggested he celebrate Mass in the cathedral at Palo, as nobody celebrates open-air Mass here in such inclement conditions. He rejected the idea. The crowd was vast; the church could accommodate only a few hundred. He had come to be with them, not to be protected from the weather.

His aides wanted to provide him with a large umbrella or a good raincoat; he dismissed their proposal, saying he wanted to wear a yellow poncho exactly like those being worn by the 500,000 faithful waiting for Mass and lining the route from the airport to that site. He had come to be with them, to share their sufferings and accompany them for some hours. For Francis, this is what incarnation of the Gospel means.

By the time his plane touched down at Tacloban airport after a 75-minute bumpy flight from Manila, the tropical storm was in full swing, bringing rain and 60-mile-an-hour winds. The government had provided one million yellow plastic ponchos for the occasion, but had outlawed the use of umbrellas to avoid injury to people as the wind could, in seconds, turn them into lethal flying objects.

Survivors told me Francis brought consolation and hope to these victims of the worst typhoon in history, which hit their island on Nov. 8, 2013, causing some 10,000 deaths and making four million people homeless.

They gave a mighty roar of intense delight as he stepped off the plane at the windy, rain-swept airport. They jumped and danced for joy as he drove among them in his popemobile and reached out to touch or bless them. His presence clearly meant the world to them. Many had lost family members, friends or neighbors; some all three. Francis knew this. He sensed their pain. The look on his face during Mass conveyed his great desire to embrace and console each one. His words said this too.

He had prepared a homily, written in English, but on seeing the hundreds of thousands of survivors huddled before him under the rain in yellow plastic ponchos like his, he discarded his prepared text and, using a Vatican translator, spoke powerfully in Spanish and with emotion, from his heart to theirs, with words of faith and hope that brought many to tears. Journalists wept too.

“When I saw from Rome that catastrophe I felt I had to be here. And on those very days I decided to come here. I am here to be with you—a little bit late, but I’m here,” he told them, drawing thunderous applause.

“I have come to tell you that Jesus is Lord. And he never lets us down,” Francis said. They applauded.

“You might say to me: Father, I was let down because I have lost so many things, my house and my livelihood,” Francis said. “If you say that, it’s true, and I respect those sentiments. But Jesus is there, nailed to the cross and from there he does not let us down. He experienced all the calamities that we experience.... From the cross, he is there for you.... We have a Lord who cries with us and walks with us in the most difficult moments of life.”  They clapped. They wept.

He drove among them after Mass, wearing the yellow plastic poncho that became the iconic image of his visit to the Philippines. Afterward he had lunch with 30 survivors who had lost loved ones.

The previous day he had been advised against travelling because tropical storm Amang was brewing, but he refused to cancel the visit. By the end of Mass, however, the storm had become a Category 2 typhoon. He had little choice but to depart four hours earlier than planned. Still, he had achieved his goal: to come and console them.

@gerryorome
Show Comments (
2
)
Comments are automatically closed two weeks after an article's initial publication. See our comments policy for more.
Beth Cioffoletti
8 years ago
I absolutely love the photos of the Pope in the Poncho. It is refreshing to see him out of his clerical garb. I have heard rumors that he dresses incognito at times so that he can get out into the streets of Rome. He blends right in with us.
Erwin Montojo
8 years ago
Actually, the word that's going around here in the Philippines is that he never even got to eat with the survivors. He was allotted 20 minutes with them (from the original 1-2 hours) because a hasty decision was made to fly him out before the typhoon would make landfall. So, he spent the 20 minutes walking around and individually meeting all the survivors assembled in the room. He then went to his place at the table and, instead of eating, spent the time listening to the survivors' stories and responded with much silence and compassion. It is said that all he had was the chips and water that the plane had on the flight back to Manila. The plane was not ready with meals because it did not anticipate the sudden change. The Holy Father really did make time with the people. I read stories of survivors who recovered their faith not because Francis came to give them answers but because he came to be with them, in silence, in their pains, to ask with them but also to bring to them the compassion of God.