Pope Meets With Sex Abuse Victims: 'Despicable actions' caused by clergy have been hidden for too long

Pope Meets With Sex Abuse Victims: 'Despicable actions' caused by clergy have been hidden for too long 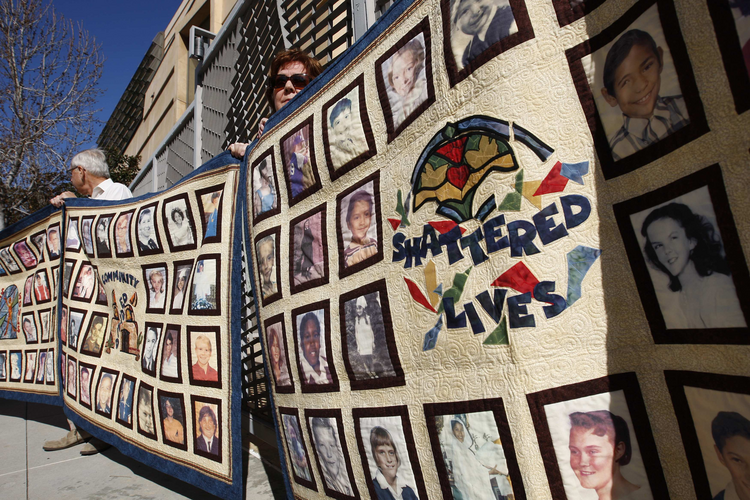 VATICAN CITY (CNS) -- Asking for forgiveness, Pope Francis told abuse survivors that "despicable actions" caused by clergy have been hidden for too long and had been "camouflaged with a complicity that cannot be explained."

"There is no place in the church's ministry for those who commit these abuses, and I commit myself not to tolerate harm done to a minor by any individual, whether a cleric or not," and to hold all bishops accountable for protecting young people, the pope said during a special early morning Mass for six survivors of abuse by clergy. The Mass and private meetings held later with each individual took place in the Domus Sanctae Marthae -- the pope's residence and a Vatican guesthouse where the survivors also stayed.

In a lengthy homily in Spanish on July 7, the pope thanked the three men and three women -- two each from Ireland, the United Kingdom and Germany -- for coming to the Vatican to meet with him. The Vatican provided its own translations of the unscripted homily.

The pope praised their courage for speaking out about their abuse, saying that telling the truth "was a service of love, since for us it shed light on a terrible darkness in the life of the church." Francis said the scandal of abuse caused him "deep pain and suffering. So much time hidden, camouflaged with a complicity that cannot be explained."

He called sex abuse a "crime and grave sin," that was made even worse when carried out by clergy. "This is what causes me distress and pain at the fact that some priests and bishops, by sexually abusing minors" violated the innocence of children and their own vocation to God, he said. "It is something more than despicable actions. It is like a sacrilegious cult, because these boys and girls had been entrusted to the priestly charism in order to be brought to God. And those people sacrificed them to the idol of concupiscence," the pope said.

He begged for forgiveness "for the sins of omission on the part of the church leaders who did not respond adequately to reports of abuse," adding that the neglect not only caused the victims more suffering, "it endangered other minors who were at risk." The pope asked God "for the grace to weep, the grace for the church to weep and make reparations for her sons and daughters who betrayed their mission, who abused innocent persons" and left life-long scars.

He told the men and women sitting in the pews that God loved them and he prayed that "the remnants of the darkness which touched you may be healed."

In an effort to help the abuse survivors heal, the pope met individually with each one, accompanied by a loved one or family member and a translator, Jesuit Father Federico Lombardi, the Vatican spokesman, told journalists. The pope spent a total of three hours and twenty minutes in closed-door talks with each person, Father Lombardi said.

The Jesuit priest said the men and women were visibly moved by the Mass and meetings and had "felt listened to," and that the encounter was "something positive on their journey" of healing. The length and nature of the pope's very first meeting with abuse survivors represent "a sign, a model, an example" for the rest of the church, that "listening is needed" along with tangible efforts for understanding and reconciliation, he said.

Responding to critics that the July 7 meeting and Mass were ineffectual and part of a publicity stunt, Father Lombardi said that if people had been able to see, as he had, the reactions of the men and women who took part in the private gathering, "it was clear that it was absolutely not a public relations event." The raw emotion on people's faces, including the pope's, as well as his strongly worded homily, all showed the effort had been about "a dialogue with a pastor and father who tries to understand deeply" the wrongs that have been committed and the need "to be honest about reality," the Vatican spokesman said.

It was the first time Pope Francis met directly with a group of victims of clerical abuse, following a tradition begun by his predecessor, Pope Benedict XVI, who met with victims for the first time as pope in 2008 during a visit to Washington, D.C. The retired pope subsequently met with other victims during his pastoral visits to Sydney, Malta, Great Britain and Germany.

The Pontifical Commission for the Protection of Minors, which the pope established in December, met July 6 at the Vatican. They discussed expanding the number of members, especially from Africa and Asia, before the next meeting in October, Father Lombardi said. The commission also said it was necessary to set up a permanent and staffed "working office" at the Vatican, he said. The commission, which currently has eight members, including a survivor of clerical sex abuse, mental health professionals and experts in civil and church law, is tasked with laying out a pastoral approach to helping victims and preventing abuse.

In his homily, the pope said he was looking to the commission to help the church "develop better policies and procedures" for protecting minors. "We will continue to exercise vigilance in priestly formation," the pope told the victims, and "we need to do everything in our power to ensure that these sins have no place in the church."

Just as Jesus told Peter to feed his sheep, the pope said, "I would add, 'Let no wolf enter the sheepfold.'"