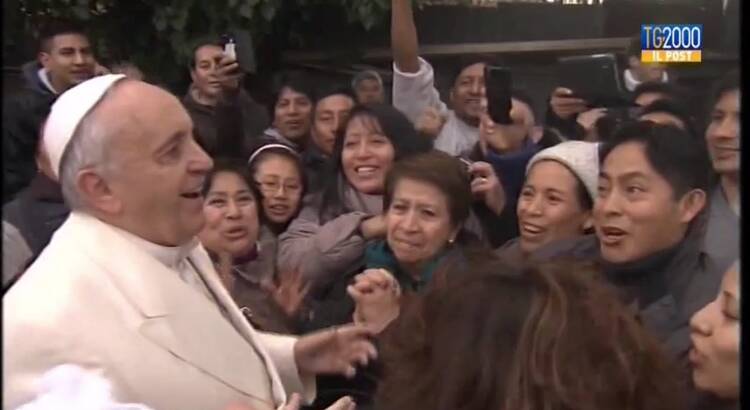 When Pope Francis walked through the gate surrounding a group of shacks and very humble homes, it took a while for people to notice. In fact, when a couple of people looked out their doors, the pope's chief security guard motioned them to come over.

"Papa Francisco!" someone shouted in Spanish, and then dozens of people came running on Feb. 8. The pope made an unannounced stop at the settlement on his way to the nearby St. Michael the Archangel parish.

The settlement on the northeastern edge of Rome was once a Gypsy or Roma camp, but now is mainly inhabited by Latin American immigrants, who have found no other place to live.

The residents kissed the pope's hand and clicked photos of him with their cellphones. As they pressed against him, he said, "Let's pray to our Father in heaven. How many of you speak Spanish?"

"All of us," they responded, so with the pope they recited the Lord's Prayer in Spanish.

He gave them a formal blessing, and then told them he had to be going since he had promised to spend the afternoon at the parish.

At the parish, the pope delivered 100 sleeping bags for the homeless assisted by the parish and the Sant'Egidio Community. He met with a group of children and with the parents of babies baptized in the past year. He also heard the confessions of a few parishioners, the Vatican said.

In his homily during the evening Mass, Pope Francis told parishioners that Jesus' public ministry was all about preaching and healing.

The pope said people should ask themselves, "Do I let Jesus preach to me or do I know everything? Do I listen to Jesus or do I prefer to listen to almost anything else, maybe people's gossip or stories?"

Jesus speaks to people through the Scriptures, he said. Although carrying a Bible or a small book of the Gospels is not something Catholics are known for, it is something they should do.

"We must make this a habit," he said. "Listen to the word of Jesus, list to the words of Jesus in the Gospel. Read a passage, think about what it says."

People also must be willing to let Jesus heal them, he said. "We all have wounds, all of us: spiritual wounds, sins, hard feelings, jealousies," people that we have decided never to speak to again. "This needs to be healed!"

"It is sad when in a family brothers or sisters no longer speak to each other over something silly," he said. "The devil takes something silly and makes a world out of it."

But Jesus can defeat the devil and bring healing, restoring harmony, the pope said. "Let yourselves be healed by Jesus."

Earlier in the day, Pope Francis recited the Angelus with thousands of people gathered in St. Peter's Square. He told them, too, that Jesus' public life was mainly about preaching and healing.

The healing ministry of Jesus continues in the church, through the sacraments and through the loving care Christians give to the sick, he said. "To care for a sick person, to welcome him or her, serve him or her, is to serve Christ."

Reminding people that the Catholic Church celebrates the Feb. 11 feast of Our Lady of Lourdes as the World Day of the Sick, Pope Francis prayed that all sick people would experience the love and care of dedicated family members, doctors and nurses.

He asked for prayers for Archbishop Zygmunt Zimowski, 65, president of the Pontifical Council for Health Care Ministry, who, the pope said, "is very sick in Poland," although neither he nor the Vatican provided more details.

Pope Francis also marked the Feb. 8 commemoration of the International Day of Prayer and Awareness Against Human Trafficking. "I encourage those who are committed to helping the men, women and children who are enslaved, exploited and abused as instruments of work or pleasure and are frequently tortured and mutilated."

The pope called on governments around the world to work decisively "to remove the causes of this shameful plague, a plague unworthy of a civil society."