Pope Francis the Reformer?: Church historian says the pope has enemies in, out of church 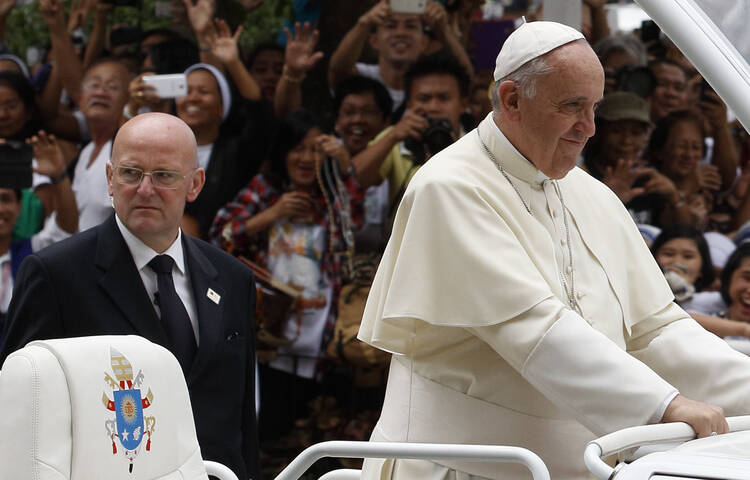 Pope Francis is a radical reformer who is facing enemies—inside and outside of the church—opposed to at least some parts of his agenda, said a prominent church historian.

Massimo Faggioli, an expert on the Second Vatican Council and the author of several books, said the pope is not a liberal who exalts the individual as the center of the world and who sees a minimal role for the church in public life.

Rather, he sees the church as having a role in society and indeed, "in everything humans go through," Faggioli said at the annual Anthony Jordan Lectures Series Feb. 28 at St. Joseph Seminary. "That is not a liberal thought; it's a radical Christian thought."

Faggioli is a theology professor at the University of St. Thomas in St. Paul, Minnesota, and the author of several books, including "Pope Francis: Tradition in Transition," which will be published by Paulist Press in May.

The Anthony Jordan Lectures are put on by Newman Theological College with support from the Oblates of Mary Immaculate.

Pope Francis, Faggioli said, sees himself as having two mandates for reform.

The first mandate he received from cardinals at the March 2013 conclave, which made him its surprise choice for pope. That mandate is to deal with problems of Vatican finances, corruption, sexual abuse and curial reform, Faggioli said.

There is consensus on the need to carry out that type of reform, and the pope faces no significant opposition to implementing it, he said.

"From the very beginning, however, he made it clear that he had another mandate that was not coming from the conclave or the institution." That is his "popular mandate," Faggioli said, that arose out of his experience as archbishop of Buenos Aires.

The popular mandate, Faggioli said, is defined by his comment, "Who am I to judge?" in reference to a gay person "who is seeking God, who is of goodwill."

"This is the real challenge he is offering the church. It's where he's making some enemies."

It also includes dealing with new issues that have arisen since the Second Vatican Council, such as the role of women in the church, the family and marriage, he said. It further includes his creation of the nine-member Council of Cardinals that meets every two months to help him govern the church.

The creation of the council, Faggioli said, "means basically telling the Roman Curia, 'You are fired.'"

In the past, whenever something new was created in the church, it was still within the Curia, he said. Instead, six of the nine members of the pope's council are cardinals who head or have recently retired as head of dioceses.

Some bishops at Vatican II in 1963 wanted to create a council similar to the one Pope Francis launched, but received a secret letter from the Vatican secretary of state telling them they had no right to propose such a thing, Faggioli said.

"Pope Francis has changed some things. It is a kind of change that has produced a remarkable and disturbing series of reactions."

Some of that opposition has come from within the Curia, but Faggioli said the "absolute power" of the Curia is more "a myth than a real thing."

"We project that they are powerful and they are not," he said.

A cardinal saying he would resist the pope if the pope undermines church unity is "something new; it's unprecedented," he said without naming specific cardinals.

The historian said he has never seen such opposition to the pope in any recent pontificate.

"This is something that worries me," he said.

Typically, those opposing Pope Francis are those who "have been saying for decades that the most important thing about being Catholic is to obey the pope. But when they receive a pope they don't like, they become liberal Catholics," he said.

In his talk, Faggioli also spoke of opposition to the pope in Europe that comes from "the non-Catholic intellectual economic establishment," including corporate and media leaders.

These people see Pope Francis as a liberation theologian who challenges "a certain way of understanding the world through the point of view of the Western establishment," he said.

Faggioli predicted this fall will be a key time for Pope Francis. His encyclical on the environment is due to be released in the summer, his September visit to the United States "will be the most delicate visit of the pontificate so far," and the world Synod of Bishops on the family will take place in October.