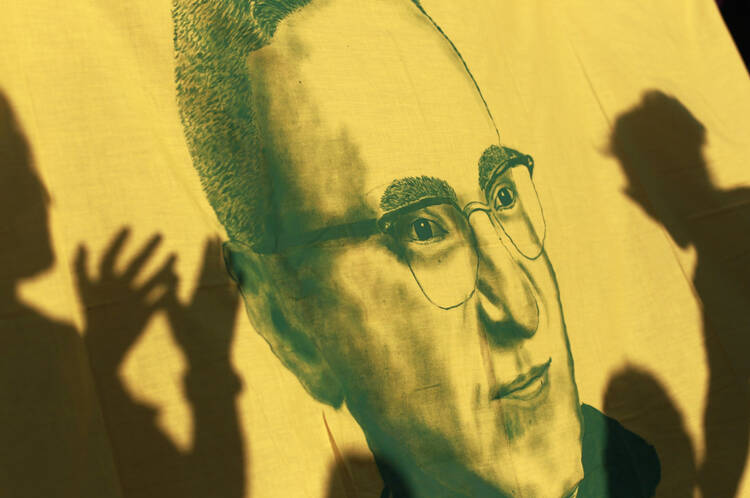 Pope Francis had strong words on Oct. 30 for individuals within the church who “defamed” the assassinated Archbishop of San Salvador Oscar Romero.

Going off script during a meeting with 500 pilgrims from El Salvador, Pope Francis said, “The martyrdom of Msgr. Romero was not fulfilled at the moment of his death—it was a martyrdom of witness, of prior suffering and prior persecution, up to his death. But even afterwards, following his death—I was a young priest and a witness to this—he was defamed, slandered, his memory despoiled, and his martyrdom continued also by his brethren in the priesthood and in the episcopate.

“This is not hearsay, but rather things I have heard. Or perhaps it is best to see it thus: a man who continues to be a martyr. After having given his life, he continues to give it by allowing himself to be assailed by all this misunderstanding and slander.”

Perhaps reflecting on his own condition as the target of much direct and implied criticism, Pope Francis added, “This gives me strength. Only God knows the stories of those people who have given their lives, who have died, and continue to be stoned with the hardest stone that exists in the world: language.”

The pope remembered Romero as a “good pastor, full of love for God and close to his brothers who, living the dynamism of the Beatitudes, gave his life in a violent way while celebrating the Eucharist, the supreme sacrifice of love, sealing with his own blood the Gospel that he announced.

“From the very beginning of the life of the church, Christians have always believed that the blood of martyrs is a seed for Christians, as Tertullian said.

“Today too, in a dramatic way, the blood of a great number of Christian martyrs continues to be shed on the field of the world,” Pope Francis said, “with the certain hope that will bear fruit in a rich harvest of holiness, justice, reconciliation and love of God. But we must remember that one is not born a martyr.”

The pope remembered how Archbishop Romero had remarked, “'We must be willing to die for our faith, even if the Lord does not grant us this honor.’”

But “giving life does not only mean being assassinated,” he said. “Giving life, having the spirit of martyrdom, means offering it in silence, in prayer, in the honest fulfillment of one's duty; in this silence of everyday life, giving life a little at a time.’

“Indeed, the martyr is not someone relegated to the past, a beautiful image that adorns our churches and which we recall with a certain nostalgia. No, the martyr is a brother, a sister, who continues to accompany us in the communion of saints and who, united with Christ, does not ignore our earthly pilgrimage, our sufferings, our anxieties.”

The pope noted that it had been Archbishop Romero’s “well-founded hope to see the happy time when the terrible suffering of many of our brothers, due to hate, violence and injustice, would disappear.”

He added, “May the Lord, with a shower of mercy and goodness and a torrent of grace convert all hearts, and may the beautiful homeland He has given you, that bears the name of the Divine Savior, be transformed into a country where all are redeemed and all are brothers, without differences, since we are all one in Christ our Lord.”

Kevin Clarke
@clarkeatamericaclarke@americamagazine.org
Show Comments (
3
)
Comments are automatically closed two weeks after an article's initial publication. See our comments policy for more.
William Rydberg
6 years 6 months ago
Slander? Meaning detraction or calumny? Common currency for those following the Lord. Think of St Padre Pio, Dorothy Day, Mother Theresa among others...
Lisa Weber
6 years 6 months ago
Many thanks to Pope Francis for continuing to use language in a way that offers hope! Speaking the truth is always hard work that is often thankless, but he carries on.
Brian McDonough
6 years 6 months ago
If you want to read how Papal mainstream Francis is, consider reading the 600++ page text, PAPAL TEACHINGS ON ECONOMIC JUSTICE which is found at the very, very bottom of this page: www.cmsm.org/CMSM_Alert/Apr10/ If you want to read how Biblically mainstream" the PAPAL TEACHINGS ON ECONOMIC JUSTICE are, consider watching and listening to [music] the following 4 YouTube videos: https://www.youtube.com/user/Matthew192124 Francis is as Communist, Marxist, Liberal and Progressive as the Old Testament, the New Testament and at least 9 Popes before him.