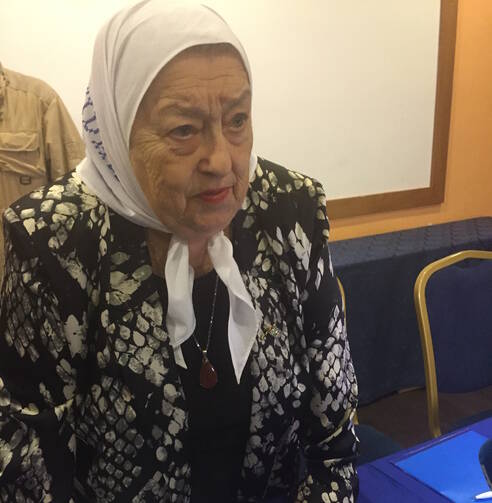 “Pope Francis is with the people, not with the powerful,” said Ms. Hebe de Bonafini after a private conversation with Pope Francis this afternoon in Santa Marte. Ms. Bonafini, 87, is one of the founders of  “Madres de la Plaza de Mayo,” an organization of the mothers of the disappeared in Argentina.

Although she is known worldwide for her decades-long struggle for some 30,000 persons who “disappeared” in Argentina during the military regime (1976-83), she surprised the press after the meeting by saying she did not discuss the question of the “desaparacidos” with Francis, nor did she speak about her two sons—Jorge Omar and Raul Alfredo, and her daughter-in-law Maria Elena Bugnone Cepeda, all of whom “disappeared” during the “Dirty War” conducted by the country’s military regime. She did not do so, she said, because she did not wish to enter into such personal matters, but preferred instead to speak about “the institutional violence” in the country today, and the very serious human rights violations occurring in the country. It was a direct attack on the new government of President Mauricio Macri.

“We embraced when we met,” she told the press. “He was very affectionate with me, and he listened attentively when I spoke. I was deeply moved,” she added. Their conversation lasted two hours and they exchanged gifts. She gave him a white scarf, the symbol of the association, and he presented her with rosary beads and “a very beautiful medallion” of the “Mother and the Child Jesus.”

The famous Argentine human rights activist then told the press: “Bergoglio grew when he transformed into Francis. I told him I was sorry because I was wrong about him. When somebody makes a mistake, one has to recognize it, and we mothers…recognize when we make a mistake.”

This was a highly significant admission because Ms. Bonafini had insulted him publicly several times when he was archbishop of Buenos Aires (1998-2013), calling him a fascist and several unprintable names. In recent weeks, however, she admitted she had been “mistaken” and that since his election as pope in March 2013 she has learned that “he had played a role on the side of the people.”

In her long conversation with him, she said she told him about “the violence” in the country over the past five months, since the new conservative government took office, and the way the poor people are suffering from the rise in the price of bread, electricity, gas and lack of meat in the supermarkets. She said they are suffering too because of ever increasing job losses and growing unemployment, and the fact that “there is no justice” in the country. Moreover, she said all of ex-President Cristina Kirchner’s programs to help the poor, pregnant women and children are being discontinued. She described the 12 years under the Kirchner administrations as “happy years” but now, she said, “we cannot be happy or good under a wild capitalism.”

She told Francis that if things continue in the direction they are now going in Argentina “then we will be back again to 2001”—a reference to the grave economic crisis that rocked the country then. She appealed to him, saying, “We need you, we want you to come, your words are very important. Holy Father you prevented the NATO bombing, what is happening in Argentina should be much easier. Oh, that you could stop the situation.”

She reported that Pope Francis had listened “very attentively” to what she had to say and told her he already “knew some of the things” she had said, “but not others.” He said that he had hoped to visit Argentina this year, but it was not possible because of his crowded agenda.

Ms. Bonafini was accompanied by her nurse and secretary during the private meeting with the pope, and later presented to him other people who had accompanied her.

Their meeting has been at the center of a controversy in Argentina in recent weeks because Ms.Bonafini is very close to the Kirchners and highly critical of the new government. Many had interpreted the meeting as a rebuff to President Macri.

Francis was well aware of these attempts to give a political spin to today’s meeting and so, over the past week, he sought in various ways to present it simply as an encounter between a pastor and a mother who had suffered greatly in these years.

“It may be a cause of scandal that I receive Ms. Bonafini. I know very well who she is, but my obligation as a pastor is to understand with meekness,” Francis wrote in an e-mail to a friend in Argentina which Telam, the national news agency, somehow obtained.

He went on to say that “this woman, from the plaza insulted me several times with heavy artillery. But I will not close the door to a woman whose sons were sequestered and who does not know how, and for how long they were tortured, when they were killed and where they are buried. I will not close the door. What I see there is the sorrow of a mother. Whether she uses me or not is not my problem.”

Some days later, in a telephone conversation with Father Fabian Baez, the priest from Buenos Aires whom he once invited to join him on the pope-mobile in St. Peter’s Square, Francis said, “Before a mother whose son they have killed, I go on my knees; I do not ask her anything.” The priest revealed this to Telam, too. Then, more recently, speaking by phone with a Jewish friend in Buenos Aires, Luis Liberman, the Director of the Chair of Dialogue and the Culture of Encounter, Francis told him “I have nothing but mercy for Bonafini.”

Francis knows the history of her association and her role in it, and how these courageous mothers started marching in 1977 in defiance of the military regime’s attempt to silence all opposition, demanding the “return alive” of their “disappeared” children. They began marching in the Plaza de Mayo in Buenos Aires, a square in front of the presidential palace, the Casa Rosada, and in the Catholic cathedral, and as a result became known as the Madres de la Plaza de Mayo. Bonafini became president of the association in 1979, and from then on helped draw international attention to the gross violations of human rights in Argentina, and gained support for their efforts to counteract them.

Last year she requested a meeting with Pope Francis, but was unable to attend for health reasons. Today she arrived in a wheelchair and was clearly moved by the warm welcome he gave her.

Today’s meeting was but the latest of Francis’ efforts at outreach to the mothers and grandmothers of Argentina’s disappeared persons. In November 2014 he received the president, Estella Carlotto, of the Abuelas de la Plaza de Mayo, Grandmothers of the Plaza de Mayo, together with her grandson who had been found after many years. She, too, admitted that she had been wrong in accusing him of being an accomplice of the military regime. Subsequently, he ordered that the Vatican open its archives on this period of history in Argentina. The church in Argentina will do likewise.