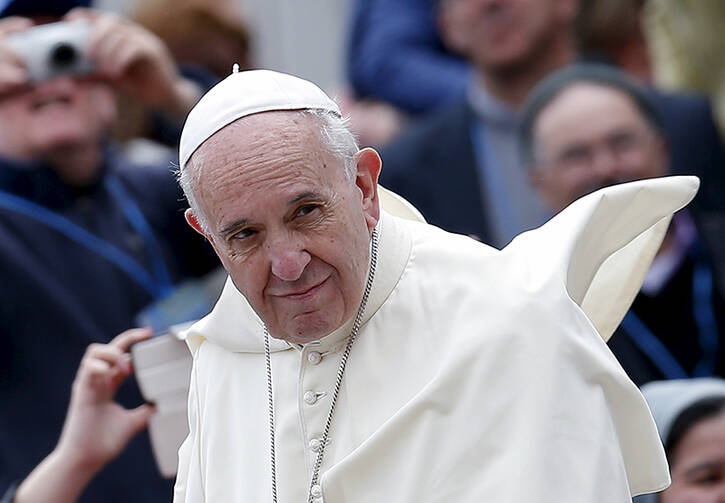 In an opening with historic import, Pope Francis has said he wants to study the possibility of ordaining women as deacons, a step that could for the first time open the ranks of the Catholic Church's all-male clergy to women.

The order of deacons was reinsitituted in the Catholic Church following the reforms of the 1960s, and while deacons cannot celebrate the Eucharist like a priest, a deacon can preach at Mass, preside at weddings and funerals, and perform baptisms.

But in restoring the diaconate, the church also restricted ordination as a deacon to “mature married men” over 35.

Many protested that limitation, saying the earliest Christian texts also speak of "deaconesses" and arguing that the modern church should also allow women deacons.

Saint John Paul II and Pope Emeritus Benedict XVI were both theologically orthodox pontiffs who said that such a move was unjustified and could undermine the concept of the all-male priesthood.

But Francis said on May 12 he agreed the matter should be given more careful consideration, telling hundreds of nuns from around the world that he himself always wondered about the role of deaconesses in the early church.

“Constituting an official commission that might study the question?” the pontiff asked aloud in response to questions from some of the sisters.

"I believe yes. It would do good for the church to clarify this point. I am in agreement,” he said, according to an initial report from National Catholic Reporter.

“I accept,” the pope said later. “It seems useful to me to have a commission that would clarify this well."

The devil will be in the details, of course.

As Francis' own questions indicated, there are debates about who the deaconesses were and what they did.

Some will argue that deaconesses played a different role in the early church from that of deacons, an office established by the Apostles to focus on caring for widows and the poor so that the Apostles could focus on preaching.

That could mean that the papal commission could re-establish an order of female deacons that falls short of actual ordination.

Or the commission could say there is no justification for establishing the office of deaconess.

But whatever happens, the fact that Francis has opened the door to the debate and the possibility of ordaining women is groundbreaking.

"This is not only an idea whose time has come, but a reality recovered from history," the Rev. James Martin, a Jesuit priest and author at America magazine, wrote on Facebook.

"Their preaching at Mass would mean that the church would finally be able to hear, from the pulpit, the experience of over half its members," Martin wrote. "Taken together, all this would be an immense gift to the church. This news fills me with immense joy."

Not everyone is likely to be as pleased.

During a global meeting of bishops at the Vatican last October, a Canadian archbishop asked that the church set up a process for ordaining women deacons, a proposal that seemed to go nowhere and which was quickly opposed by many commentators.

“If you’ve opened the diaconate to women, you are opening up the door to female priests,” Chad Pecknold, a theologian at Catholic University of America, told The Washington Post at the time.

Quebec Archbishop Paul-Andre Durocher anticipated that criticism, telling Catholic News Service that “the diaconate in the church’s tradition has been defined as not being ordered toward priesthood but toward ministry.”

A number of other scholars and theologians and even a few bishops and cardinals have agreed, and over the years have kept the debate over deaconesses alive.

Now their arguments will get an official hearing.

Phyllis Zagano on the question of Catholic women deacons.

A bishop makes a case for expanding the diaconate.

David Gibson - Religion News Service
Show Comments (
19
)
Comments are automatically closed two weeks after an article's initial publication. See our comments policy for more.
Michael Malak
6 years 3 months ago
Seeing as how there is still a dearth of priestly vocations the move towards opening the diaconate to women makes eminent sense. The current priest-to-parishioner ratio is an injustice to the people of God and a terrible burden for priests to bear alone. Holy women, always, have been the laborers who sustained the church with unheralded and selfless service. Its recent history, pointedly, demonstrates how much the church needs mercy and sanctity. Men do not have a monopoly on these virtues. The de jure prohibition of women priests and deacons, also, is not an equitable notion; rather, it’s based on custom. Jesus associated with women and never excluded them from the ministry; a male society that embraced primogeniture did that. It's time to change course after two thousand years if there is to be a church in the future.
Tim O'Leary
6 years 3 months ago
Michael - your comment underlines how easily one can depart from the deposit of the faith when the issue is framed in terms of exclusion. Was Christ practicing exclusion when he called 12 men to be his Apostles?
Laurance Strait
6 years 3 months ago
Don't forget He also called Junia to be an apostle.
Michael Malak
6 years 3 months ago
If I recall correctly, all the Apostles, except for John, were married men. Certainly, Peter had a wife and he was the rock on which the church was built though we don't have married priests, currently. The church has changed before and ought to consider if it's wise to do so now in times of pressing need. The priest shortage is real and deacons help lighten the load. Women in formal ministry would benefit all the faithful.
Tim O'Leary
6 years 3 months ago
The celibate requirement is long-standing for priests, about a thousand years, and was encouraged even by St. Paul. But, it never was a doctrine. It was always a discipline. The inability to ordain women to the priesthood is a totally different matter, an infallible doctrine, part of the Church's deposit of faith.
Laurance Strait
6 years 3 months ago
The diaconate was "reinstituted" in the 1960s? And is limited to "married men"? Perhaps you are thinking of the *permanent* diaconate...
Erica Jesse
6 years 3 months ago
All the pope said was that "It would do good for the church to clarify this point" meaning that the clarification could easily say "Definitely not and here's why." Pope Francis hasn't changed a single teaching since becoming pope and he's not about to do it now. People just are not educated enough on the Catechism of the Catholic Church (paragraphs 1567-1600 in this particular case if you're currious) to realize that. The Church has survived longer than any modern form of government or other society. There is no need to "modernize" because it will surely outlast all current social classifications, just as it outlasted Roman Empire and The Byzantine Empire and The Ottoman Empire.
J Cabaniss
6 years 3 months ago
The door to women priests is permanently closed.

Dubium: Whether the teaching that the Church has no authority whatsoever to confer priestly ordination on women, which is presented in the Apostolic Letter Ordinatio Sacerdotalis to be held definitively, is to be understood as belonging to the deposit of faith. Responsum: Affirmative. (Cdl Ratzinger)