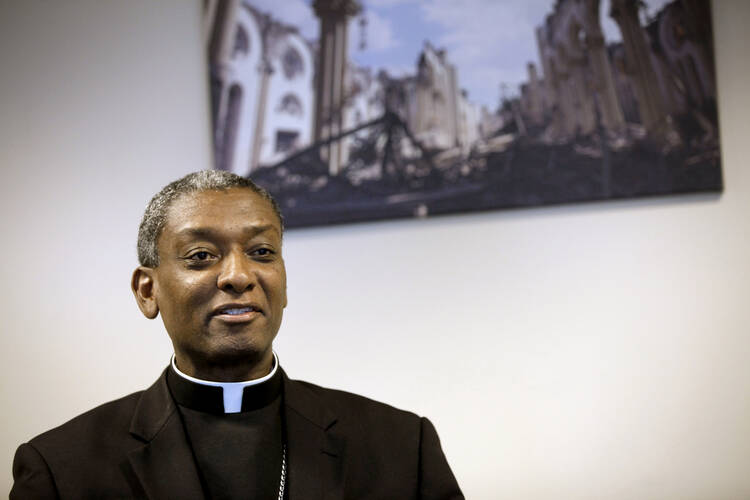 Pope Francis named 19 new cardinals, including the archbishops of Westminster and Quebec and six men from his home region of Latin America, and announced a consistory for their formal induction into the College of Cardinals on Feb. 22. The selection of new cardinals does not include a prelate from the United States, but strongly represents the church in the developing world.

The consistory will bring the total number of cardinals to 218 and the number of cardinals under age 80 to 122. Until they reach their 80th birthdays, cardinals are eligible to vote in a conclave to elect a new pope. Two current cardinal electors will turn 80 in March, bringing the number of electors back to the limit of 120 set by Pope Paul VI. (Other popes have occasionally exceeded that limit for short periods of time.) The College of Cardinals is currently 13 shy of that 120-mark among eligible-to-vote members. That means Francis chose the exact number of new cardinals needed to bring the voting ranks up to 120 during the next few months.

Four of the new cardinal electors are from Italy, leaving that nation's share practically unchanged at nearly a quarter. Curialist Rocco Palma noted that the historic "cardinalatial sees" of Venice and Turin were passed over this time by Pope Francis, who elevated instead Archbishop Gualtiero Bassetti, 72, "a figure said to more faithfully reflect Francis' [preference for a shepherd] with the 'smell of the sheep.'" One of the three regional vice-presidents of the Italian bishops conference, Bassetti becomes the first archbishop of Perugia to enter the College since the late 19th century. No cardinals were selected from the United States for the first time since 1979, Palma noted, adding that may only reflect the fact that the traditional complement of U.S. cardinals at the college had already been reached.

Four new cardinal electors are Vatican officials, three of them in offices that traditionally entail membership in the college.

Another three of the new cardinals are already over the age of 80 and, therefore, ineligible to vote in a conclave. The pope uses such nominations to honor churchmen for their scholarship or other service to the church.

Among the new so-called honorary cardinals is Cardinal-designate Loris Capovilla, who served as personal secretary to Blessed John XXIII.

The pope announced the nominations to the faithful in St. Peter's Square shortly after noon Jan. 12, after praying the Angelus. Francis said the new cardinals, coming from "every part of the world represent the deep church ecclesial relationship between the church of Rome and the other churches scattered throughout the world."

The Director of the Press Office of the Holy See, Father Federico Lombardi, S.J., shared some observations about the Pope's selections:

• The Pope has adhered to the rule of 120 Cardinals under 80 years of age who will be eligible to vote in a papal election. Currently there were 13 seats “vacant”; 3 others will be “vacant” by the end of May. So the Pope has chosen 16 electors.

• Of the 16 eligible to vote, four are members of the Curia (i.e., ¼ of the total) and 12 are residential archbishops or bishops, all from different countries.

• The distribution of electors who are residential prelates is well distributed among the different continents: Two from Europe, three from North and Central America, three from South America, two from Africa, and two from Asia.

• The choice of Cardinals of Burkina Faso and Haiti shows concern for people struck by poverty.

• Two residential prelates were chosen from places not traditionally considered Cardinalatial Sees (namely, Perugia in Italy, and Cotabato on the island of Mindanao in the Philippines).

• Among the Cardinals who are not electors, "one should notice," Lombardi said, Archbishop Capovilla, the secretary of Pope John XXIII (who will soon be canonized during the 50th anniversary of the Second Vatican Council).

• Archbishop Capovilla, aged 98, is the oldest of the Cardinals-elect; the youngest is Bishop Chibly Langlois of Haiti (55 years old).

-- German Archbishop Gerhard Muller, prefect of the Congregation for the Doctrine of the Faith, 66.

-- Italian Archbishop Beniamino Stella, prefect of the Congregation for Clergy, 72.