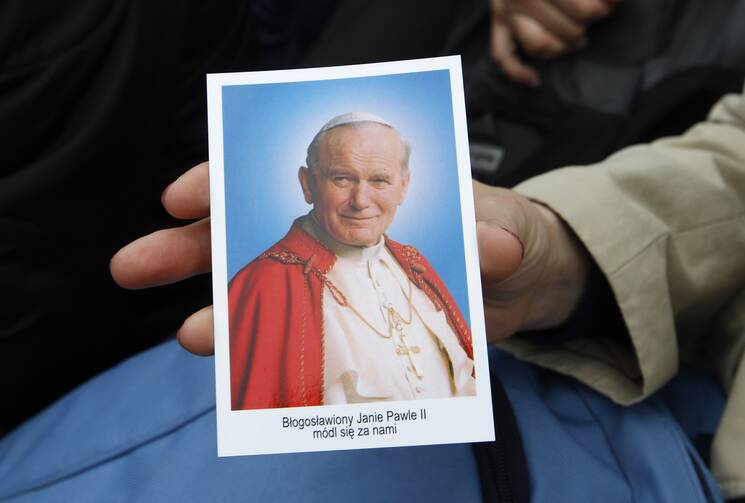 After Pope Francis met July 5 with Cardinal Angelo Amato, prefect of the Congregation for Saints' Causes, the Vatican published a list of decrees the pope approved related to Blessed John Paul's canonization and 11 other sainthood causes.

Normally, after a pope signs a decree recognizing the miracle needed for a canonization, the pope consults with cardinals around the world and calls a consistory -- a gathering attended by any cardinal who wants and is able to attend -- where those present voice their support for the pope's decision to proclaim a new saint.

A date for a canonization ceremony is announced formally only during or immediately after the consistory.

The cardinals and archbishops who are members of the saints' congregation met at the Vatican July 2 and voted in favor of the pope recognizing as a miracle the healing of Floribeth Mora Diaz, a Costa Rican who was suffering from a brain aneurysm and recovered after prayers through the intercession of Blessed John Paul.

The congregation members, according to news reports, also looked at the cause of Blessed John and voted to ask Pope Francis to canonize him without requiring a miracle. According to church rules -- established by the pope and subject to changes by him -- a miracle is needed after beatification to make a candidate eligible for canonization.

Jesuit Father Paolo Molinari, the longtime head of the College of Postulators -- or promoters of sainthood causes -- has explained that in the sainthood process, miracles are "the confirmation by God of a judgment made by human beings" that the candidate really is in heaven.

But, Father Molinari also has said that for decades theologians have explored the possibility that such a confirmation could come by means other than someone experiencing a physical healing. For instance, Blessed John Paul beatified Victoire Rasoamanarivo in Madagascar in 1989 after accepting as a miracle the case of a wind-swept brush fire stopping at the edge of a village whose inhabitants invoked her intercession.

Announcing the decision about Blessed John's cause, Jesuit Father Federico Lombardi, Vatican spokesman, said the discussions about the need for miracles and what can be defined as an acceptable miracle continue. However, he said, the movement in the late pope's cause does not indicate a general change in church policy.

The members of the Congregation for Saints' Causes "have expressed their hope, and the Holy Father has accepted it," Father Lombardi said. If Pope Francis "had any doubts, we wouldn't be here" announcing the consistory to approve Blessed John's canonization.

"As we all know very well, John XXIII is a person beloved in the church. We are in the 50th anniversary year of the opening of the Second Vatican Council, which he convoked. And I think none of us has any doubts about John XXIII's virtues," the spokesman said. "So, the Holy Father is looking toward his canonization."

Father Lombardi also noted that no date for a canonization ceremony was announced, but it is likely that the two popes will be canonized together, possibly "by the end of the year."

The other decrees approved by Pope Francis July 5 recognized:

-- The miracle needed for the beatification of Maria Josefa Alhama Valera, also known as Mother Esperanza, the Spanish founder of the Handmaids of Merciful Love and the Sons of Merciful Love. She died in Italy in 1983.

-- The martyrdom of four groups of priests and nuns killed during the Spanish Civil War in 1936-1939.

-- The heroic virtues of three founders of religious orders; an Italian priest; and an Italian layman.

Catholic News Service
Show Comments (
1
)
Comments are automatically closed two weeks after an article's initial publication. See our comments policy for more.
Bruce Snowden
8 years 10 months ago
Once in his Pontificate Blessed JPII placed before the College of Cardinals the question of whether or not miracles are necessary for canonization. Fifty percent of the College said "yes" the other fifty percent said "no." So the system remained unchanged. I wonder if Pope Francis was one of the Cardinals who voted in favor of eliminating miracles as a prerequisuite to a declaration of sainthood. Requiring miracles seems like an attempt to "force" God to cooperate! Now I'm delighted that Pope Francis will canonize Blessed JXXIII without another miracle, hoping his insight will reset the road for all future canonizations. Let's face it. If the consistent practice of heroic virtue is the one necessary prerequisite to the formal proclamation of sainthood, it seems to me that Catholics especially in todays world saturated in faithless srcularism and materialism who consistently, live out the Faith, are practicing heroic virtue, and are saints and can be canonized. Indeed.Jesus once said if someone is for you he/she cannot be against you.So, rooted somewhere in that teaching I would like to see a Pope for the first time canonize any Believer who lives life in faithful allegiance to Christ. In "Tertio Millennio Adveniente" quoted in the book, "Testimony Of Hope" pg.110, JPII says in part, "The witness to Christ borne even to the shedding of blood has become a common inheritance of Catholic, Orthodox, Anglicans and Protestants ...". Saints walk among us wearing different shoes but somehow they all match the imprint of the "Shoes of the Fisherman" designded by that great shoemaker, Jesus!