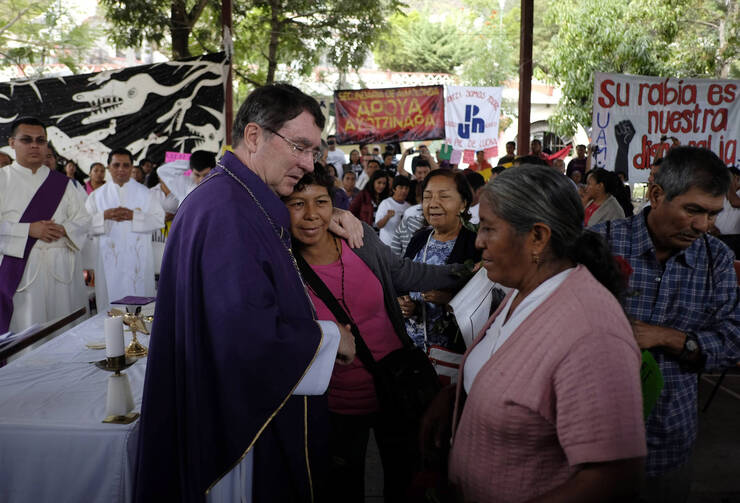 Pope Francis has appointed the French-born Archbishop Christophe Pierre, one of the Holy See’s most distinguished and respected diplomats, as the new apostolic nuncio to the United States.

The Vatican made the announcement, April 12, after the Holy See received the formal agreement from the Obama administration. He succeeds Archbishop Carlo Maria Viganò who served as nuncio to the United States since Oct. 10, 2011. The Italian archbishop now ends his long years of service to the Holy See, and will retire to his homeland.

At the time of his new assignment, Archbishop Pierre was nuncio to Mexico, a position he has held with considerable distinction for the past nine years, since March 22, 2007. He comes to Washington, D.C., as an experienced diplomat, with first-hand knowledge of the dramatic plight of migrants from Central America and Mexico to the United States, and will be able to give voice to Pope Francis’ concern for them.

As nuncio, he will be the Holy See’s point man in relations with the U.S. administration and with the United States Catholic Conference of Bishops (U.S.C.C.B.). One of his most important roles will be the identification of candidates to be bishops in this country. Pope Francis has already outlined clearly the qualities he wants to see in future bishops, and the new nuncio will ensure this is reflected in the names he presents to Rome.

Archbishop Pierre, 70, is the first Frenchman to be appointed as Apostolic Nuncio to the United States. A polyglot, he speaks English and Spanish fluently. He is “a pastor,” known for his “humility and simplicity” and is “excellent on all fronts,” a source who knows him well confided. A fellow nuncio described him as “a thoughtful, hardworking man” and “good listener” with “a great sense of fairness and balanced judgment.”

Pope Francis got to know him well as he prepared for his recent visit to Mexico, and so liked him that he decided to assign him this highly important mission.

Before going to Mexico, Archbishop Pierre had served with distinction as nuncio to Uganda (1999-2007) and Haiti (1995-99). While in Uganda, St. John Paul II sent him to Burundi to oversee the Holy’s See’s diplomatic mission there following the assassination of the papal nuncio to that country, the Irish-born Archbishop Michael Courtney, on Dec. 29, 2004. He celebrated the funeral mass for the former nuncio at the Regina Mundi Cathedral in Bujumbura on Dec. 30, attended by thousands of people. He remained in the country until the pope appointed Archbishop Paul Gallagher (now Secretary for Relations with States) as the new nuncio there.

Gifted with a good sense of humor and a deep voice, the new nuncio can captivate an audience. According to The Vision, Uganda’s leading daily, he is a man who goes among the people, and is ready to help anyone regardless of status.

Born in Rennes, France on Jan. 30, 1946, he spent the greater part of his childhood and early education in Africa, mainly in Madagascar, with some years in Malawi and Zimbabwe and one in Morocco. He entered the seminary of Saint-Yves in Rennes at the age of 17, but interrupted his studies to do his two-years of military service (1965-66).

Ordained priest for the archdiocese of Rennes in April 1970, he served as assistant priest in a parish in the diocese of Nanterre for the next three years. He subsequently gained a master’s degree in theology from the Institute Catholique de Paris, and a doctorate in Canon Law in Rome.

He entered the Holy See’s diplomatic service in 1977 after studying at the Pontifical Ecclesiastical Academy in Rome, where its diplomats are trained. He was subsequently assigned to serve in its diplomatic missions in New Zealand, Zimbabwe, Cuba and Brazil and as Permanent Observer to the United Nations office in Geneva. He therefore comes to his new post with considerable experience in both bilateral and multilateral diplomacy.

Archbishop Pierre is expected to take up his new position within two months, a Vatican source told America.

Gerard O’Connell
@gerryorome
Show Comments (
1
)
Comments are automatically closed two weeks after an article's initial publication. See our comments policy for more.
William Rydberg
5 years 6 months ago
Am I the only one to notice his name is "christ" & "peter". Can't get a name that sounds more catholic...B