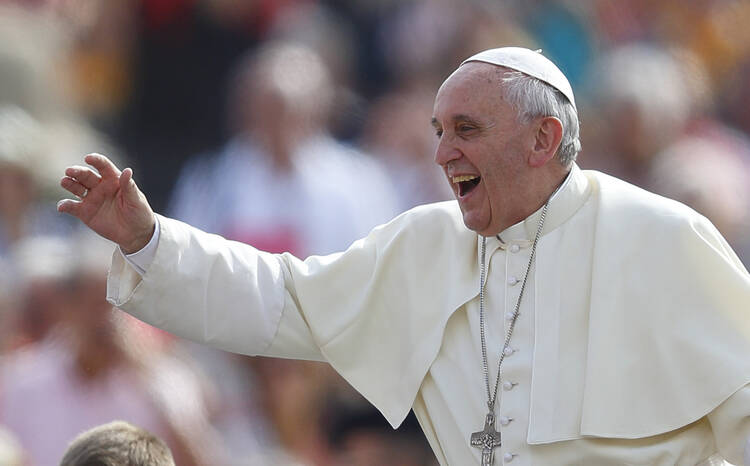 It is with both caution and charity that we set out to assess the first months of the papacy of Pope Francis. Six months is not a long time in the church, and it seems unfair to evaluate an individual’s achievements after so short a period. We are also aware that as a Jesuit journal we have a special relationship to the first Jesuit pope, who kindly agreed to allow America to print in this issue the English translation of his interview with Jesuit journals from around the world. Yet St. Ignatius Loyola, the founder of the Jesuit order, calls us to look back over our lives to discern the fruits of the Spirit. In this spirit, we look at the gifts Pope Francis has bestowed upon the church.

We begin, as St. Ignatius recommends, with gratitude. We are thankful to Pope Francis for embracing his role as pope with a “big heart open to God.” The joy he takes in his ministry is abundantly evident. Called by his brother cardinals to the Petrine office, he took up his new role with surprising energy. His heart was open to the workings of the Spirit, and he has in many ways been transformed. The pope offers a lesson to Christians of all ages: always be free enough to answer God’s call, as the fishermen did by the Sea of Galilee.

Pope Francis’ style has proved to be both simple and profound. By riding in a modest car and living in an unadorned apartment, he sends a clear message: material possessions are fleeting. Choose to attach yourself to God, not the things of this world. By reaching out to workers at the Vatican and calling upon ordinary Catholics in moments of crisis, he lives out the Lord’s command to love our neighbor. These have always been the messages of Jesus Christ, but they need to be presented again in every generation. Pope Francis has been wonderfully adept at calling us to these Christian principles. He has won over many disaffected Catholics, and his words of compassion for the suffering, for gays and lesbians, and for unbelievers have already reshaped the image of the church in the world.

The pope has also embodied a refreshingly collegial style. By publicly seeking the counsel of eight cardinals, whose report on church reform is due in October, Pope Francis put his trust in the wisdom of his brother bishops. He seems to know where his gifts lie and where he can profit from the assistance of his colleagues in ministry. He is, to use a term from St. Ignatius, “indifferent,” “poised like a scale at equilibrium” as he considers his options. Whether the issue at hand is the viability of the Vatican Bank or the workings of various Curial offices, the pope does not come across as attached to any one plan of action, but to what best advances the work of Christ in today’s world.

Pope Francis has not shrunk from assuming an international profile as the world debates the morality of war. His vigil for peace in Syria drew an estimated 100,000 people to St. Peter’s Square, where the pope sat with them in prayer for hours. “Is it possible to walk the path of peace?” the pope asked. “Can we get out of this spiral of sorrow and death? Can we learn once again to walk and live in the ways of peace? Invoking the help of God, under the maternal gaze of the Salus Populi Romani, Queen of Peace, I say: Yes, it is possible for everyone!” At a time of increased militarism around the world, the pope is putting the church forward as an unwavering advocate for peace. Today, when violence tears at the fabric of so many societies, this is the prophetic role the church is called upon to play.

Finally, the pope has displayed a steadfast commitment to the poor. He has reached out to families in the favelas of Rio de Janeiro and migrants on the Italian island of Lampedusa. While built on such personal encounters, his witness extends to a substantive critique of the economic and social structures that divide our society into rich and poor. The pope’s bracing words that the “golden calf of old has found a new and heartless image in the cult of money” made many people uncomfortable. That is as it should be. It is clear from his interview elsewhere in these pages that Pope Francis has developed a deep spirituality over many years in ministry, learning from his mistakes and seeking counsel from his brothers and sisters in Christ. Nowhere is this more apparent than in his radical embrace of the poor.

Pope Francis has been subject to mostly gentle criticism thus far. Some had hoped for more lay involvement in a reform process that now includes only eight prelates. Others have noted that Pope Francis’ winning style and instinct for collaboration may not be enough, on their own, to bring about necessary changes in the Curia. These questions are worth exploring, but we should be careful not to burden the pope by placing in him all of our hopes for the flourishing of the church in the world. He would be the first to remind us that the work of Christ begins with us and that our hope rests in God alone.