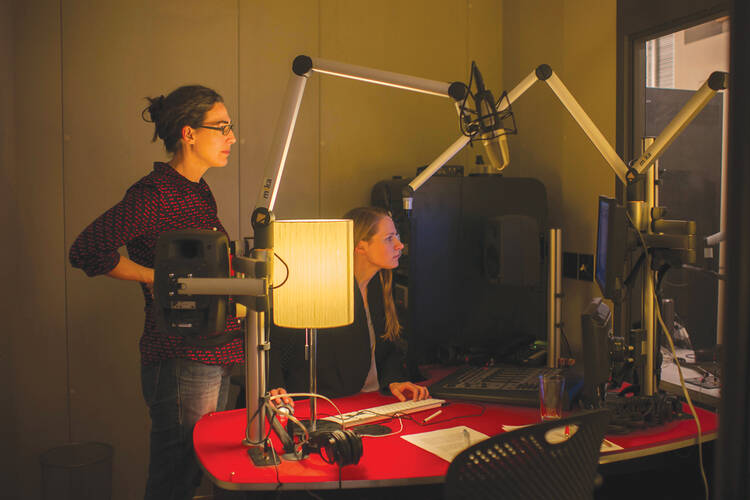 The year 2014 boasted one of the great serialized American dramas of the last 20 years and the debut of another wonderfully quirky one. Neither starred household names. And neither was broadcast on AMC, FX, Netflix or HBO. In fact, they were not onscreen performances at all. They were podcasts.

Like all its tech-lingo brethren—cyberspace, blog, emoticon—podcast is a blighted word, colorless and sickly, the linguistic equivalent of recirculated air. Those unfamiliar with the term might prefer to overlook it rather than try to decipher it.

Put simply, a podcast is audio content that you download. It is a broadcast made for your i-device. As a communication medium it began in the last century, as amateurs with microphones uploaded recordings of themselves talking endlessly about the things they loved—“Lost,” Iowa politics, Red Sox Nation. If you knew where to look, you could find just about anything. But you had to know where to look.

Then in 2005 Apple began to offer a directory of available podcasts on its iTunes Store. Suddenly every “Grandma’s Best Pierogis” show had as a potential audience the entire iTunes user base (now well over 800 million people).

Still, by their nature, most podcasts, even the successful ones, play to micro-niche markets. One of the most consistently popular podcasts on iTunes over the last five years, “WTF with Marc Maron” (in which that wry comedian talks with other comedians about their lives and hardships), has had over one hundred million downloads. But each episode averages just 220,000 listeners—small when compared to the number of viewers reached through television.

Then this fall the producers of the popular radio show “This American Life” released Serial, a heavily researched, 12-part podcast reinvestigating the brutal murder in 1999 of Hae Min Lee, an 18-year-old Baltimore high school student. Adnan Syed, her classmate and ex-boyfriend, has spent 16 years in prison for the crime. But the case has serious holes: the chief witness was a teenage drug dealer whose story even now keeps changing; the defense attorney never pursued important leads (like Adnan’s alibi); and Adnan himself was by all accounts a placid, likable guy with no criminal record or history of violence. Hae herself had found their breakup largely amicable.

Within weeks of its debut, “Serial” was the number one podcast on iTunes not only in the United States but also in the United Kingdom, Canada, Germany and far-away Australia. After each episode the website Reddit, which helps users to create discussion groups on any topic, had tens of thousands of people posting their thoughts and questions about the case. By season’s end, “Serial” had an astounding one million downloads per episode, making it the most popular podcast ever.

True crime shows have a built-in audience; who doesn’t want to be Sherlock Holmes (or a voyeur)? But it is the reporter Sarah Koenig who made “Serial” so uniquely compelling. Koenig spent over a year researching this show, working through the testimony, police reports, phone records; reenacting sequences of events; interviewing everyone she could find who knew Adnan and Hae or was connected to the events; and over and over going back to Adnan himself with new questions, new theories, new information. She is deeply respectful both of the life that has been lost and the plights of those who remain. But her purpose is not to exonerate Adnan as much as it is to try to understand. Who is he, really? What happened?

In “Serial” we journey with Koenig through a broken criminal justice system and a fallen world. The deeper she goes, the murkier it all becomes.

How to Succeed in Business

At the same time that Sarah Koenig was deep-diving into a moral abyss, the former “This American Life” producer Alex Blumberg began StartUp, an always honest, often humorous podcast about Blumberg’s attempts to start a podcasting business.

In each half-hour episode, Blumberg offers the next challenge in starting his company. And he does so with remarkable transparency. Every mistake that he makes, every awkward conversation or fear is presented without decoration for all to see. So in the pilot we hear his first pitch to an investor; it is such a stammering, weak-kneed mess that the investor stops listening and tries to coach him.

Other episodes have presented Blumberg in an uncomfortable discussion about ownership percentages with a potential business partner; Blumberg being mocked by his wife when she discovers his idea for the name of his company comes from Esperanto; and most recently, his company going through its first crisis, when an interview with a child is done without making it clear to the boy’s mother that it was actually for an advertisement. (In the episode, Blumberg not only comes clean about their mistake but lets the rightfully angry mother talk about how it made her and her son feel.)

It is a brave move to show yourself warts and all, as Blumberg does. Yet the more he does so, the more we identify with him. Who doesn’t know what it is like to have a dream, to find it at risk, to potentially screw it up? We end up rooting for Blumberg and his team the same way we hope others might somewhere root for us.

It is too soon to say whether podcasts like “Serial” and “StartUp” can bring the medium into the mainstream. In any case, they reveal the great potential of podcasts to tell stories that are deep and meaty, individual and profound.

That potential should make us Catholics take note. Where is the podcast that reports in-depth stories of faith, loss and redemption? What about a podcast about life in a parish, religious community or hospice? With very little money, equipment or initial expertise, much is possible. And great stories are waiting to be told.

Correction, Feb. 22, 2015:The producer of "StartUp" is Alex Blumberg, not Alex Goldberg.

@PopCulturPriest
Show Comments (
1
)
Comments are automatically closed two weeks after an article's initial publication. See our comments policy for more.
Michael Widner
7 years 9 months ago
You say Catholics should take note... There have been Catholic podcasts out there for a long time. Some are lousy, some are too conservative for my taste, but many of them are quite good. Although targeted toward younger Catholics (that doesn't include me!), check out SQPN.com. Fr. Roderick Vonhogen has been podcasting for 10 years. Don't forget, even America Magazine has a podcast.