What we can do for Middle East Christians 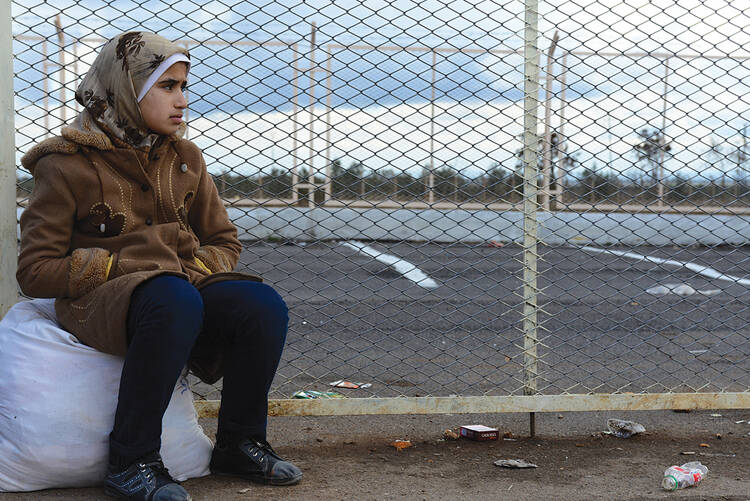 From the Middle East, the very cradle of Christianity, come daily headlines that make us want to recoil in disbelief. They accompany images of ghastly beheadings, families torn apart, innocent bystanders mercilessly gunned down and homes torched for no other reason than the faith of their residents. The bigger picture is even more disturbing. More than 7 million people of all different faiths have fled violence incited by groups like the Islamic State, also known as ISIS or ISIL. As many as 700,000 of those on the run are children. Pope Francis urges all of us to immediate action: “the blood of our Christian brothers and sisters is a testimony which cries out to make itself heard by all those who still know how to distinguish between good and evil.”

News of Christians in faraway lands can feel far from our own homes, but Pope Francis reminds us they are our family. “It makes no difference whether the victims are Catholic, Copt, Orthodox or Protestant. Their blood is one and the same in their confession of Christ,” he says. Let us pray the world responds and joins the church worldwide in defending the faith—our own and that of Jewish, Muslim and other believers—against any who would pervert God’s good name for their own violent ends.

When members of a delegation from the U.S. Conference of Catholic Bishops’ Migration and Refugee Services visited the Middle East in 2012, they sounded the alarm as to the estimated 550,000 people forced from their native countries. Another delegation returned at the end of 2014, reporting that the number had grown to nearly four million. Now is the time for all of us to reflect upon what more the church in the United States can and must do and what each of us can do individually. We must increase our witness, our prayer and our giving.

Witness.In his farewell address as U.S.C.C.B. president, my predecessor, Cardinal Timothy Dolan, described the “Via Crucis currently being walked by so many of our Christian brothers and sisters in other parts of the world who are experiencing lethal persecution on a scale that defies belief”—a scale that has only increased since. He went on to say that if our common membership in the mystical body of Christ is to mean anything, then their suffering must be ours as well. To make it our own, we need to make a special effort to be informed, follow the news and learn the stories of our sisters and brothers suffering for Christ today.

Earlier this year, Bishop Oscar Cantú visited Iraq to learn and then share firsthand. He spoke emotionally about a 34-year-old policeman who set out on foot with his family of eight following attacks by ISIS. He made it to relative safety after 12 days of hiding and foraging for food in the sweltering summer and now lives in a tent with his mother, wife and children. It was spacious compared with the room available to the 11 people sharing a tent nearby.

“Whenever I got the opportunity, I assured displaced families of the prayers, support and advocacy of the church in the United States. Time and again I promised to bring back their stories and their hopes for peace,” Bishop Cantú told the U.S. Senate upon his return.

We cannot be fearful of telling their stories on the dais or at the dinner table. We must reach out to national leaders and urge them to work with the international community to intervene and protect the rights of religious minorities, address political and economic exclusion that is exploited by extremists and increase humanitarian and development assistance. We will have a special opportunity to learn, pray and act during the Fortnight for Freedom (from June 24 to July 4) that invites all to “bear witness” for religious liberty at home and abroad. During this time, the liturgical calendar celebrates a series of great martyrs who remained faithful in the face of persecution: St. Thomas More and St. John Fisher, St. John the Baptist, SS. Peter and Paul and the First Martyrs of the Church of Rome. (Learn more at fortnight4freedom.org.)

Pray.In March the administrative committee of the U.S.C.C.B. called upon the faithful to join in prayer. “On behalf of America’s Catholic bishops, we pause to listen and invite people of all faiths to join us in prayer for those facing the stark reality of religious persecution in the Middle East and elsewhere.” Let us all continue—in hope—to pray for the day when we can all share in the joy and lasting peace of Christ’s resurrection. Draw near to our precious martyrs, for they speak of the love of Jesus Christ, even in moments of merciless brutality. Their faith strengthens us as we offer a bold proclamation of God’s love in the public square.

Give. In September, a special collection for the Middle East was held throughout the church in the United States. The faithful responded with tremendous generosity. Parishioners gave more than seven million dollars across 111 dioceses. Catholic Relief Services and the Catholic Near East Welfare Association received a vital lift in their heroic efforts to respond to the needs of survivors. We must be prepared to do even more and encourage others—governments and N.G.O.’s—to redouble their efforts as the United Nations estimates current international commitments meet only 29 percent of the rising need.

Never tire. In the face of daily ghastly headlines, Pope Francis encourages us, “Do not tire of repeating: Christ is risen!” As our sisters, brothers and children face a rising tide of deadly persecution, our responsibility as a nation is clear: Stop the violence and protect the vulnerable. Protect them not only from the immediate threat but also from the long-term conditions of social and economic exclusion that offer fertile soil for extremism. Pope Francis has said, “In reaffirming that it is licit, while always respecting international law, to stop an unjust aggressor, I wish to reiterate that the problem cannot be resolved solely through a military response.” Any necessary military action must be conducted within the framework of a diplomatic effort that encourages governments in countries such as Iraq and Libya to guarantee minority participation, religious or otherwise, in the full life of their nations.

America’s Catholic bishops are working with the Holy See and with various bishops’ conferences in the Middle East to see how we can best support peace efforts. We continue to call upon the U.S. government to intensify work with its international counterparts. The young policeman needs to know he is not alone and that his family is present in our deliberations.

To witness, pray and give offers each of us an opportunity not only to unite with the suffering of our brothers and sisters today but also, in a real way, to walk in the footsteps of all the saints who have given their lives for their faith and ultimately for us—the beneficiaries of a rich spirituality born in the poverty of suffering. It is a walk we take with the universal church. There are seven Latin and Eastern rite Catholic churches and several Orthodox churches still in the land where Jesus walked. Each faces a fight for its life. Joining together in public and private prayer, rebuilding churches and welcoming refugees, we are never alone, and we will never tire.

Archbishop Joseph E. Kurtz of Louisville, Ky., is the president of the U.S. Conference of Catholic Bishops.

Show Comments (
5
)
Comments are automatically closed two weeks after an article's initial publication. See our comments policy for more.
Henry George
7 years 5 months ago
I am in favor of allowing these refugees into Europe/Unites States/Australia and New Zealand. I hope another collection is taken up and we, American Catholics, give more than 7 million dollars.
LAWRENCE HANSEN
7 years 5 months ago
Sincere thanks to Archbishop Kurtz for his call to action. In his conclusion, he wrote, "There are seven Latin and Eastern rite Catholic churches and several Orthodox churches still in the land where Jesus walked." I would add that there are also a number of historical Protestant and evangelical Christian Churches there as well. As Pope Francis has said, "Today, there's the ecumenism of blood. In some countries they kill Christians because they wear a cross or have a Bible, and before killing them they don't ask if they're Anglicans, Lutherans, Catholic or Orthodox. The blood is mixed. For those who kill, we're Christians. We're united in blood, even if among ourselves we still haven't succeeded in taking the necessary steps towards unity and perhaps the moment hasn't arrived. . .Those who kill Christians don't ask for our ID cards to know which church you were baptized in. We have to take this reality into consideration." (Interview in "La Stampa," 12/14/2013)
M May
7 years 5 months ago
I'm grateful for the chance to have communal prayer for persecuted Christians throughout the world. Unfortunately, our parish plans to focus on domestic persecution as the primary focus of Fortnight for Freedom. I find it embarrassing to focus on issues like Cathiloic florists being asked to help with gay weddings when Christians are being killed and sold into slavery throughout the world. The USCCB paperwork I've seen has all focused on domestic persecution. Is there an effort from the USCCB to have parishes discuss international issues as well?
Alfred Chavez
7 years 5 months ago
This a good place to put in a good word for the Equestrian Order of the Holy Sepulchre of Jerusalem (EOHSJ). To the extent one is able this is a fine way to support our brothers and sisters in the Middle East. It's a tradition that goes back to the beginnings of our Church. Deus lo vult!
7 years 5 months ago
1. It might help if USCCB and Kurtz would acknowledge that the Islamic State is not focused exclusively on Christianity. ISIS is equally hostile to and is persecuting Shia Muslims and other factions that do not subscribe to its very aggressive beliefs. What would be really impressive would be for him to tell us that the bishops are publicly uniting and working with Muslim groups and religious leaders on this issue. 2. Kurtz damages his credibility by bringing in the Fortnight for Freedom. The fortnight was and is a PR move by the bishops to try to mobilize political support for their opposition to the Affordable Care Act and same sex marriage. (Pelvic issues uber alles.) Their effort to link the requirement that someone sign a piece of paper to avoid the ACA mandate with the rampant killings of tens of thousands by ISIS is worse than cynical politics.