Out of the Rubble: Life and death after Typhoon Haiyan 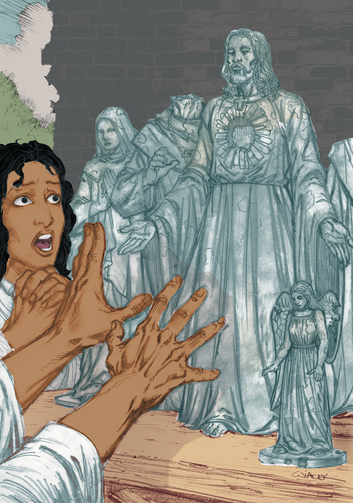 Some said that their houses “exploded” when the 20-foot-high storm surge hit. Parents and children were torn from one another’s arms. The boats and nets used by the people to earn a living were gone. For days there was little food or water.

Across the Philippines more than 6,000 people were killed last November when one of the strongest typhoons ever recorded fell full force on some of the most ill-prepared and impoverished people in the world. Typhoon Haiyan struck the fishing village of Costa Brava on the shoreline of Tacloban City especially hard and leveled the village. In my work through the Urban Poor Associates, I visited many of the survivors, nearly all Catholics, and asked about how they related to God in the midst of this tragedy.

The story the people tell is that a few days after the storm, a woman who lived far away and who had no connection with Costa Brava had a dream in which a statue of the Sacred Heart told her to come and find it under the rubble left by the typhoon. She went to the area. Local people say they saw her walk directly to a spot, dig there and recover the statue. There was a hole where the statue’s wooden heart had been fitted, though the wooden heart has not been found. The woman wanted to take away the statue, but the people stopped her and put the statue on the altar of the chapel in the center of the village. To be more precise, they placed it in what remained of the chapel—the rear wall, along with a portion of the roof that reaches out over the altar. The discovery prompted others to go out and to dig, in an effort to find all the sacred statues they could find and put them on the altar alongside the Sacred Heart.

It may be the strangest group of statues ever brought together. There is a life-size statue of the Blessed Mother without hands; a statue of St. Dominic without a head (we thought it was Jesus until we saw the rosary around its neck). There are angels without wings and numerous smaller statues of saints, all maimed in one way or another. In the center stands the Sacred Heart with the hole where its heart once was.

The local people I spoke with, whether young or old, see in these statues a message of death and resurrection. One woman at a community meeting explained: The statues “were all ‘dead’ and then God found them under the stones and rubbish and brought them back to life. And so it is with us. We were dead during the storm and now we live. God has given us back our lives. He has shown us mercy.” As she spoke, the people around her nodded agreement. Another time I asked three young girls why they prayed in the chapel instead of in one of the city’s big churches. They told me God had brought people back from the dead in this place. A young theologian might say the poor people have hopelessly mixed up the physical realities of death and life, living people and statues. An older theologian might say, “Let’s listen first.”

If God wanted to give the people a sign that he was with them in their suffering, could he have chosen a more tender and apt way to do so than to remind them that Jesus and Mary, and all the saints had been with them, had died with them and come alive again with them? Jesus and Mary suffered the pain of the typhoon just as the people had. Their images had emerged, changed, but still able to stand. How could God come closer to the poor fishermen and their families than to meld their lives with those of these images of his son and all the saints?

People told us there were miracles in the chapel. Miracles or not, the people believe God has done wonderful things for them. The most prominent reaction is gratitude. Crowds come on weekends to pray in the chapel. Priests say Mass there. Someone has put up a sign that quotes the Lord in Exodus, “Remove your sandals, this is holy ground” (Ex 3:5).

We stood there a long time looking from one statue to another wondering what God’s message could be and how to move forward. We were like visitors standing before the crèche at Christmas time. In the crib, as in Costa Brava, God’s message is both simple and complex. These characteristics seem to be the signature marks of God’s works. And so we are witnesses to this experience of God making himself known anew, even as, all along, he had remained with us in his own exquisite manner.

Denis Murphy works with the Urban Poor Associates in Quezon City, Philippines. He can be reached at urbanpoorassociates@ymail.com.