Our Mag in Havana: The growing influence of a new Catholic journal in Cuba 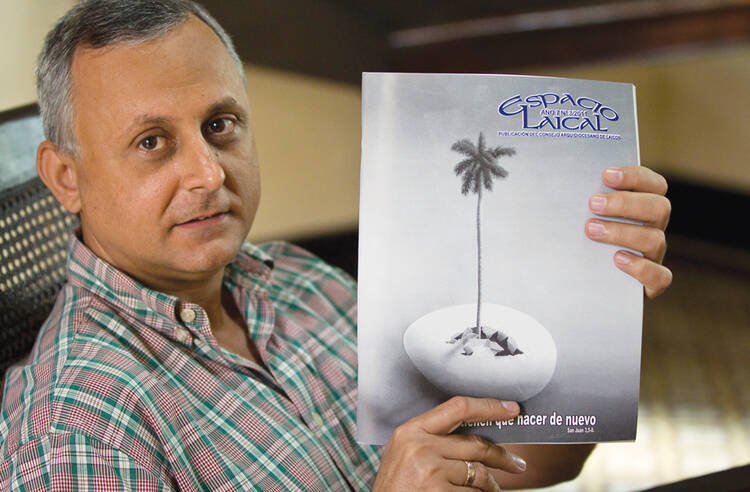 The strengthening of religions in Cuba, especially since the 1980s, is reflected in the expansion of religious media. Espacio Laical and Palabra Nueva, both publications of the Archdiocese of Havana, are the most visible and perhaps the most influential and widely disseminated, particularly among political, intellectual and cultural elites. Together with the secular journal Temas, Espacio Laical has been expanding the boundaries of public debate over the changes underway in Cuba. Since 2009 Espacio Laical, in particular, has played a leading role in calling for political, economic, social and cultural change with broad-based citizen participation. Its articles are disseminated through other publications beyond Havana and passed from hand to hand.

While Espacio Laical and America exist in very different contexts, there are some intriguing similarities. Both are committed to critical analysis of contemporary issues from diverse viewpoints. Both root their stances in Catholic theology and social doctrine. Neither has been timid about tackling controversial issues in their respective societies. In the case of America, for example, condemning racism in the United States began in the 1930s, while Espacio Laical has questioned the hypercentralization of political decision-making in Cuba. Both have considerable influence with political and intellectual elites, while being accessible to the general reader. And each has from time to time generated controversy.

Espacio Laical has benefited from the fact that Cuba is a nation of readers. It is also a country of strong opinions, as well as a society that relishes debate. Historically, Cubans consumed newspapers, magazines and pamphlets in great quantities and employed their contents to best others in arguments ranging from politics to baseball. That remains true today. Since its founding in 2005 to the present, Espacio Laical has moved from more devotional and theological content to analyses of current political, economic, social and cultural issues. As it has developed, it has increasingly included secular voices, as well as some from outside Cuba, particularly Cuban Americans. The latter reflects the commitment of the Catholic Church in Cuba to serve as a bridge for Cubans on the island and abroad in promoting dialogue and reconciliation.

In 2010 Espacio Laical published 4,000 copies of each number; its editors estimate that each one was read by five to seven persons. However, much of its readership is by way of its Web site (www.espaciolaical.org). Add to this the fact that recent surveys indicate that approximately 75 to 85 percent of all Cubans believe in the divine, if not in a specific god; religions have considerable potential to exercise influence within Cuban society and occupy more public space.

A Voice for Lay Catholics

Espacio Laical promotes the insertion of lay Catholics in evangelizing the island and assisting in the amelioration of societal problems. It consciously tries to reach out to the general public and in recent years has attempted to stimulate more discussion and debate among the population in general in an effort to increase political participation and overcome passivity among the citizenry. This has encouraged both individuals and groups, as well as religions, to occupy more political space and animate civil society.

The first issue of Espacio Laical in 2005 contained articles that reflected its evangelizing purpose. Of the 16 articles, nine dealt directly and seven somewhat peripherally with religious themes. In the January-March 2013 issue, the lead article focused on proposals for recasting the official press in Cuba. The stated objective was to rethink the role of the media in the broader context of the changes currently underway in Cuba.

The remainder of the issue included some 20 articles, 12 of which focused on political, economic and social issues. Several articles focused on economic issues, including one that emphasized new developments in terms of cuenta propismo, that is, non-state sector enterprises.

The same issue contained two articles on the role of the Cuban armed forces by the lay editors Roberto Veiga and Lenier González that have generated considerable reaction. Veiga asserted that the Revolutionary Armed Forces, known as the FAR, had an important role to play in the transformation of Cuba currently underway, just as churches did, among others. According to Veiga, the churches’ role is to elevate the spirituality of the society and promote fraternity, while intellectuals have the task of aiding the pueblo in dreaming of a better country. The state, he felt, ought to position itself as a moderator and guarantor of diversity, and other countries should accompany Cuba as it resolves its economic problems. These are rooted largely in heavy dependence on food and manufactured imports, which contribute to an imbalance in trade and foreign debt, inflation and overdependence of the economy on services.

In this respect, Veiga conceived of the FAR as one of the fundamental pillars that would guarantee national order, given the country’s institutional and juridical weakness as it became more participatory and less hierarchical politically. Furthermore, he argued for a military that ultimately would be under civilian control, but for the present would retain a degree of autonomy and economic self-sufficiency, as well as social influence. His colleague Lenier González predicted that 200 years from now the two institutions likely to survive in Cuba would be the Catholic Church and the FAR.

Assessing Cuba’s current situation, Mr. González argued that the greatest challenge facing President Raúl Castro was reforming the Cuban Communist Party and facilitating the transition of the country to a two-party political system with a loyal opposition. This, he argued, was a prerequisite for negotiating with the United States, as well as for preserving the social accomplishments of the revolution. Furthermore, the stability provided by the FAR during a period of transition could also facilitate the insertion of Cuba into the global economy and the inter-American system. Given the existing role of the FAR in governing, guaranteeing national security, as well as managing some sectors of the economy, Mr. González asserted that the military could help eliminate the existing tension between the enormous concentration of power in the state and a republican civil polity.

In particular, the author perceived the military as having a role in facilitating institutional reform and an open, inclusive national dialogue. In this process Mr. González saw dialogue with the Cuban diaspora as essential. He concluded: “The Armed Forces, like the Catholic Church, have the patriotic and moral responsibility to watch over and facilitate the best of Cuba’s possible futures. Their biggest challenge consists in going beyond their particular institutional interests and constituting themselves as servants of the interests of the nation.”

A major development in Espacio Laical’s trajectory was the analysis of Cuba’s mass media in the first issue of 2013. Gathering together a diverse group of experts, including the political scientist Esteban Morales, the award-winning journalist Luis Sexto, the researcher Jorge Gómez Barada, the journalist Justo Planas, the sociologist Aurelio Alonso and the BBC correspondent in Cuba, Fernando Raysberg, the editors asked them to evaluate the role of the mass media in Cuba, including its strengths and weaknesses. Criticisms were wide-ranging, as were recommendations for improving or transforming the press.

Among the most frequent comments were that the official press was more of an apologist for the government than a monitor. Even when the media were critical, it was felt by some of the panelists that they did so in a selective manner, leaving aside many issues and failing to examine the causes of problems. According to Esteban Morales there was a tendency to affix blame for problems on junior officials rather than senior officials. Furthermore, it was felt that rather than providing information, the media tended to hide or obscure it. Hence, the role of the media in promoting accountability, particularly on the part of officialdom, was not being realized.

Luis Sexto asserted that, by and large, ministries and government enterprises were unwilling to provide information, in spite of a 2007 resolution of the Politburo of the Cuban Communist Party that journalists should have ample access. He was also preoccupied by what he styled as the lack among younger journalists of analytical capacity, compounded by their lack of experience. Justo Planas focused on his background as a revolutionary in reporting on the centralization of the state, vertical governance and ideological homogeneity, which, he felt, had contributed to a non-pluralistic press. This made it less flexible and tolerant than the cultural realm or academia. Models imported from the Soviet Union, he asserted, had inculcated structural deficiencies that made the media ineffective and anachronistic. Mr. Gómez did not, however, feel that the Cuban media were always weak, but rather that they became so in the 1980s and 1990s. He concluded, “The Cuban press does not believe that there exist multiple truths, it believes in only one Truth.”

Aurelio Alonso, a noted sociologist and specialist on religion, felt that the Cuban media was characterized by disinformation, vertical administration, fear of external influences, including the Communist Party, and self-censorship. Esteban Morales picked up on some of these comments, arguing that media policy was made largely by the political and administrative apparatuses and not journalists. This tended to distort not only coverage of Cuba, but also international coverage. He also felt that political elites tended to underestimate the public’s capacity to analyze and be informed through alternative sources, including their relatives abroad, tourists and the Internet.

Luis Sexto opined that there really was not a single government policy regarding the media, and there should be one that reflected reality in all its diversity and that the role of the media was to inform in an objective, systematic and transparent fashion. This openness required abandoning self-censorship, mediocrity, bureaucratic language, rhetoric, triumphalism and banality, as the Communist Party had recently urged. The realization of this was, however, challenging. Jorge Gómez Barata chimed in that the situation was made more complex by ideological exclusivity and the existence of an official discourse that was visible in the press. What was needed, he asserted, were policies that were efficacious, coherent and compatible with the exigencies of the time. Freedom of the press was also essential.

The consequences of a controlled press were deemed by Esteban Morales to include the poor quality of the information transmitted to the public and the weakening of the role of the media in Cuban society. Luis Sexto noted that this was not the case with respect to Espacio Laical. Rather, he felt, it was distinguished by measured and balanced reporting. There was consensus that the media should assist society in dealing with problems in order to secure a better future. In this respect, Cuba needs a press that reflects the desire for social justice and national autonomy. The alternative press, including the religious media and social media, had a critical role to play, but an effective secular media was even more important. Hence, the official media needed to be reformed and rooted more firmly in civil society. It was concluded that better media would make for improved socialism. A media-wide debate between the Espacio Laical and the official media would be interesting.

Clearly Espacio Laical is increasingly stimulating broadbased discussions particularly of political and socioeconomic issues. Tackling the role of the Cuban armed forces and the official media demonstrated a determination to confront major issues in a very direct fashion. By doing so, it has generated considerable debate and some criticism. Overall, however, political and intellectual elites have been attentive, conceding that Espacio Laical is raising issues that the mass media are not. As a consequence, the publication is occupying more political space than other actors in civil society. Whether a religious publication will continue to have influence as more opportunities open up for secular actors in Cuban society is the question.

Margaret E. Crahan is a senior research scholar at the Institute of Latin American Studies of Columbia University in New York.