The alternative campaigns of Barack Obama and Paul Ryan 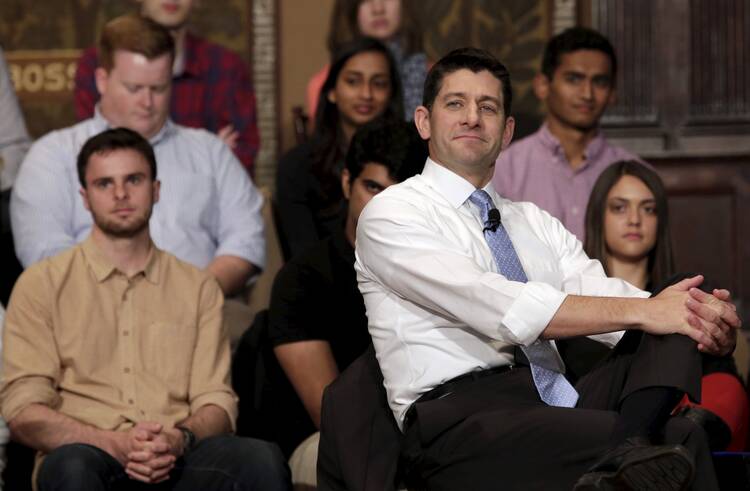 As the presidential race moves toward nomination of two historically unpopular candidates, two other campaigns are underway. President Obama is working to secure his legacy. Speaker Paul Ryan is trying to offer an alternative to the angry messages of Donald Trump and Senator Ted Cruz.

I’ve seen these two campaigns in action. President Obama came to Georgetown for an unprecedented panel on overcoming poverty. He was passionate and challenging and sought common ground as he addressed a priority he clearly cares about but rarely talks about. Ryan recently came to Georgetown and offered a stark contrast with the candidates who now dominate the Republican race, renewing his consistent call to take on poverty in the United States.

These two leaders come from different parties, ideologies and backgrounds. Their opposing budgets outline very different policies. They both seem driven by ideas and value time with their families over Washington politics and fundraising. But they often blame each other for their inability to act. Ryan blames Obama’s executive orders for failure of immigration reform, ignoring that it was Republican leaders who blocked a vote on bipartisan Senate legislation. Obama often blames Ryan’s House Republicans for gridlock and policy paralysis.

In the last year, President Obama has found his voice and a renewed agenda, relying on executive action to overcome Congressional resistance. On Cuba, Iran, climate change and immigration, he has taken steps to be “a consequential president" (which he said in 2008 that Ronald Reagan was and Bill Clinton was not). He is seeking to persuade and embarrass Republicans to act on his nomination of the widely respected Judge Merrick Garland, which would affect the Supreme Court for years.

Ryan seems appalled by the Republican campaign, breaking his silence to speak out against Trump for demonizing immigrants and banning Muslims from entering the United States, insisting “it’s not what this country stands for.” He represents the antithesis of Cruz’s shutdown politics, reaching agreement with Senator Murray to keep government open. Ryan came to Georgetown to make the case for an alternative Republican vision, calling for fixing a broken immigration system, overcoming poverty, an alternative to Obamacare and entitlement reform. He simply ignored the fact that his “party of ideas” was about to nominate a leader who opposes many of these ideas.

Both bring ideological baggage. Ryan has created and supported budgets that cut essential programs for the poor but not subsidies for the rich. His lonely leadership on poverty comes with proposals that could weaken the safety net. Obama’s administration often seems preoccupied with cultural issues. The Supreme Court is practically begging the administration to further accommodate religious ministries who object to its contraceptive mandate. Obama came into office to end wars, but he is sending more special operation forces to deal with chaos in Iraq, Afghanistan and Syria and cannot close Guantanamo.

We should hope Ryan can resist powerful forces of nativism, racial resentment and isolationism in his party. I hope Obama can continue to protect immigrants and act on climate change. I also hope both will continue to make poverty a priority. I believe that if we could lock them up for a weekend, they could argue and agree on a much needed bipartisan plan to address economic, family and other factors that create and sustain pervasive poverty in our nation.

Both spoke recently on the failures and possibilities of politics. Ryan told a group of interns, “Our political discourse...did not used to be this bad, and it does not have to be this way…. We don’t have to accept it. And we cannot enable it.” Obama returned to Illinois to insist, “We’ve got to build a better politics, one that’s less of a spectacle and more of a battle of ideas, one that’s less of a business and more of a mission.”

As President Obama prepares to leave and Speaker Ryan begins to lead, they are warning us of how our broken politics undermines the common good. Their alternative campaigns lack the drama and consequences of the race for the White House, but these two very different leaders are calling us to rise above the anger, personal attacks and mistrust that dominate this election year.

Show Comments (
4
)
Comments are automatically closed two weeks after an article's initial publication. See our comments policy for more.
timothy haering
6 years 7 months ago
With the popularity of Game of Thrones, I am tempted to say, “You know nothing, JOHn Carr.” But you nailed it, sir. Amen Amen Amen! Facing what can only be described as Mick Jagger [to live in this town you must be tough tough tough tough tough tough tough] mudwrestling Helen Reddy [I am woman hear me roar] for leadership of the free world, I am taking Morton Kondracke’s advice: I’m writing in Paul Ryan. http://www.rollcall.com/news/Why-Im-Going-to-Write-In-Paul-Ryan-245485-1.html
Vincent Gaglione
6 years 7 months ago
I was prepared to compose some potshots at John Carr for what I thought early in the piece was his lionization of Paul Ryan. I was glad to read further on that he takes a dim view of Ryan’s ideas for addressing poverty, so-called “entitlements” reform, and the social safety net. From my personal viewpoint, Ryan’s proposals make his idol Ayn Rand look liberal! I do disagree with what I consider Carr’s fantasy of Obama and Ryan intellectually wrestling and coming to some kind of policy agreement on the issues of immigration and poverty. I say that because Ryan to date has not wanted to offend the “tea party” wing of the party. Ironically, at the annual DC correspondents’ dinner, Obama created a humorous video piece with John Boehner mocking the fact that a grand bargain could not be achieved. He probably had a better chance for that with Boehner than he does with Ryan. Two sentences in Carr’s piece are telling I think and buttress my point: “Ryan blames Obama’s executive orders for failure of immigration reform, ignoring that it was Republican leaders who blocked a vote on bipartisan Senate legislation. Obama often blames Ryan’s House Republicans for gridlock and policy paralysis.” Ryan lays the blame solely on one person…Obama; Obama lays the blame on Republican party policy. Obama, who ran on a “change” platform, unfortunately can’t wrestle policy with anyone whose leadership position is intimately bound to his party’s policy. And that policy was once notoriously expressed by Mitch McConnell, that they wanted to make Obama a one-term President. That didn’t happen but Republican Party policy never deviated from that attitude, even after Obama’s re-election. That was the tragedy of the last 8 years in American politics and ironically birthed the Trump candidacy in some pundits’ minds.
Joseph Manta
6 years 7 months ago
Poverty in this country is greater now than when President Obama took office & he can't just blame the opposition party. It seems that the only way Liberals think to reduce poverty is to have government spend more money. Pope Francis has told us that having a job is more important than receiving handouts. “It is not enough to offer a sandwich if this is not accompanied by the possibility of learning to stand on one’s own feet. Charity that leaves the poor in the same situation as before is not adequate. True mercy – that which God gives and teaches us – asks for justice, asks that the poor find the way out of their poverty.” Pope Francis Homily And this is not just the job of the government. Bobby Kennedy tells us, per Matt Malone, SJ: “We can do this,(end poverty)” he told the students at Ball State, “not by delegating power to a bureaucracy, not by sending more money and passing new laws, but by challenging the concern of our individual citizens—you and me.” We can't just look to government to solve the problem
Ernest Martinson
6 years 6 months ago
Rep. Paul Ryan is right in saying political discourse is becoming worse. But he is pollyanna is saying it does not have to be this way. The stakes are too high. Welfare recipients seek to preserve their government privileges even in the face of limiting liabilities. Social Security, Medicare, employer health insurance subsidies, farm subsidies, education grants, energy subsidies, housing subsidies, and indefensible defense subsidies are just a sample of welfare benefits that are impossible to sustain in reality but are fought for in the unreal world of present politics.