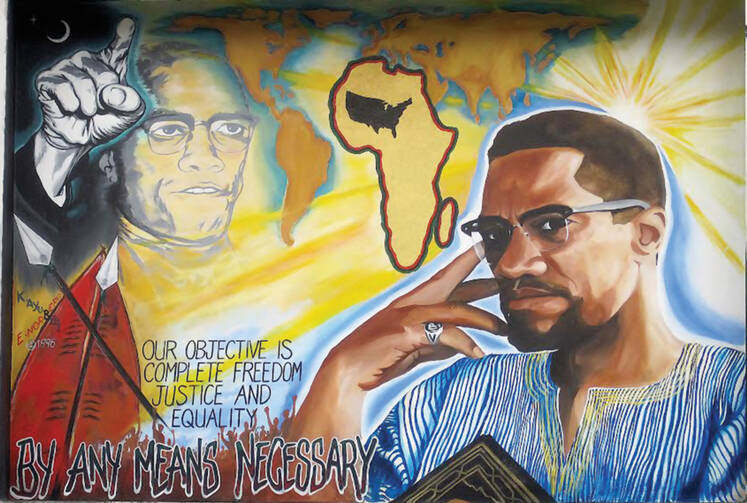 We have been deluged with 50th anniversaries in recent months. This past November the nation stopped to remember the assassination of President John F. Kennedy. On a more frivolous note, much has been made of the 50th anniversary of the Beatles’ first appearance on American television on Feb. 9, 1964.

It will be interesting to see on Feb. 21, 2015, how many people stop to remember the assassination of the man who was born Malcolm Little on May 19, 1925, in Omaha, Neb., and who eventually changed what he would have called his slave surname to become Malcolm X. In between the tragic memories suggested by November 2013 and February 2015, a better date for commemorating Malcolm X might be April 2014, the 50th anniversary of Malcolm’s pilgrimage (hajj) to the places in the Arabian Peninsula that Muslims associate with Abraham, especially but not exclusively Mecca.

Pilgrimage plays a more central role in the practice of Islam than it does in post-biblical Judaism or the traditions of Christians at any period. One of the five pillars of Islam, the hajj is not quite as rigorously required of all Muslims as the other four pillars. Problems in financing the hajj could excuse a faithful Muslim from undertaking this special pilgrimage.

What purpose does the hajj serve? Like many other pilgrimages, the hajj includes not a little of the penitential. Much emphasis is laid on the ritual separation of the pilgrim from his or her ordinary, sinful life. For many Muslims the hajj also serves, even more importantly, as an education in Islam—either a deepening of what is already known or an introduction to those elements of the Islamic tradition that have never been emphasized or properly understood.

Many Muslim pilgrims have experienced dramatic changes in their lives as a result of their experiences on the hajj, and in modern times perhaps none more dramatically than Malcolm X. The son of a fiery Baptist Pan-African nationalist preacher and a mother born in Grenada, Malcolm spent his earliest years in various poor urban settings in the U.S. Midwest. After the death of his father in 1931 and his mother’s committal to a mental hospital when Malcolm was 13, his teenage years led him into a life of petty crime in Boston and New York City. Early in 1946, the year he turned 21, Malcolm went to jail in Boston and spent the next seven years behind bars. During those years, after a period of militant atheism, he eventually felt attracted to the doctrine and practice of the Nation of Islam, submitting to the discipline it involved after 1948.

Founding of a Nation

The Nation of Islam, an African-American religious and political movement, originated in Detroit in 1930, the creation of an extremely elusive person named Wallace Fard, later known as Wallace Fard Muhammad. Much mystery surrounds the origins and the later history of this founder, with claims that he was a New Zealander of East Indian descent, an Oregonian of Spanish descent, a native of Mecca or even an emigrant from the areas of Asia that are now Afghanistan or Pakistan. After some brushes with the law in California, Fard moved to Chicago and joined the Moorish Science Temple, a religious foundation with Islamic overtones aimed principally at an African-American audience. The Moorish Science Temple, somewhat Masonic in its imagery and rhetoric, bore only a distant relationship to normative Sunni or Shiite interpretations of Islam. Eventually, after internal struggles in that Chicago-based organization, Fard departed for Detroit in 1929. There he founded the Nation of Islam with Elijah Poole—an African-American man who later went by Elijah Muhammad—as his principal disciple and apostle after 1931.

Much of the teaching of the Nation of Islam centered on a doctrine of African racial superiority, the mirror image of the ideology of white racism. Fard disappeared from history in 1934, but Elijah Muhammad reconstructed Fard’s past, making him out to be much more than a mere human being. Malcolm X in his autobiography sums up the message of Elijah Muhammad about Fard succinctly, narrating how “Mr. Wallace D. Fard...was ‘God in person’...and had given to Elijah Muhammad Allah’s message for the black people who were the ‘Lost-Found Nation of Islam here in the wilderness of North America.’” Such incarnational ideology bears no resemblance to normative Islam, to say nothing of the reverse racism of the nation’s creed. Around this time Malcolm Little rejected his surname; thereafter he was known as Malcolm X, although he eventually embraced the more obviously Muslim name, Malik El-Shabazz, the name on his passport when he made his Muslim pilgrimage in 1964.

Replacing Elijah Muhammad at an event held in New York City on Dec. 1, 1963, nine days after the assassination, Malcolm X delivered a fiery lecture on “God’s Judgment of White America.” It was only in the question-and-answer period after the lecture that Malcolm disobeyed Elijah Muhammad’s prohibition. Asked his opinion of the Kennedy assassination, Malcolm said it was a case of “the chickens coming home to roost....the same thing as had happened with Medgar Evers, with Patrice Lumumba, with Madam Nhu’s husband.” On Dec. 2, 1963, The New York Times headlined its story: “Malcolm X Scores U.S. and Kennedy: Likens Slaying to ‘Chickens Coming Home to Roost.’” Elijah Muhammad, furious with Malcolm’s insubordination, suspended him from any public speaking for 90 days, a period that gave Malcolm time to reflect on his continued adherence to the Nation of Islam. In any case, the relationship between Elijah Muhammad and his much more charismatic lieutenant had begun to sour long before the speech of Dec. 1, 1963.

On March 8, 1964, Malcolm broke publicly with the Nation of Islam, announcing the founding of the Muslim Mosque Inc., as well as the foundation of its secular, Pan-Africanist counterpart, the Organization of Afro-American Unity, a society that could appeal for membership from the ranks of non-Muslim African-Americans. Furthermore, with the encouragement of Sunni Muslims of Middle Eastern origin, Malcolm converted to Sunni Islam and made plans to make the hajj in April 1964.

As a member of the Nation of Islam, Malcolm never learned many of the basics of the Islamic tradition. He was, for instance, unfamiliar with the Arabic prayers that all Muslims must employ in the five daily times of worship (salat). At the urging of Sunni Muslims he had met in New York, Malcolm made the acquaintance of a scholar of Egyptian origin, Dr. Mahmoud Youssef Shawarbi, then the director of the Federation of Islamic Associations in the United States and Canada. In a series of private tutorials, Shawarbi gradually weaned Malcolm away from the peculiar doctrines of the Nation of Islam. Once that was accomplished, Dr. Shawarbi interceded with the Saudi Embassy to grant Malcolm a visa to make the hajj.

Had it not been for connections he had made through Dr. Shawarbi and other prominent Muslims in the United States, it is unlikely that Malcolm would have passed muster as a Muslim on arrival in Jeddah, the traditional gateway to Mecca. As it turned out, after some initial difficulties, he became an official guest of then-Crown Prince Faisal and was accompanied throughout his hajj by a mutawwif, a guide who accompanies new pilgrims on their journey and shows them how to perform the various rites involved.

When Malcolm first saw the Kaaba, the empty, windowless shrine within the precincts of the Sacred Mosque in Mecca sometimes called the House of God, he was struck by the diversity of the worshipers processing around it, “thousands upon thousands of praying pilgrims, both sexes, and every size, shape, color, and race in the world.” Recognition of the multiracial, multiethnic nature of the worldwide Muslim community confirmed what Malcolm had imbibed of genuine Sunni Islam from Dr. Shawarbi. It also allowed him to make progress into a deeper and more theocentric appreciation of what life for a Muslim means.

The hajj ritual invocation called the talbiya—often called Labbayka from its first word in Arabic—is recited in a loud voice by pilgrims when they enter into the consecrated state for the pilgrimage rites. It sums up the absolute theocentrism of Islam and the hajj most eloquently: “Here I am, O God, here I am! You have no associate in divinity! To You are due praise, grace and power! Here I am!” On the day following his visit to the Kaaba, Malcolm participated in the highpoint of the hajj, the rite of standing (wuquf) on Mount Arafat, the “hill of mercy” nearly 20 miles east of Mecca. “Arriving about noon, we prayed and chanted from noon until sunset,” he later wrote. “Finally, we lifted our hands in prayer and thanksgiving, repeating Allah’s words: ‘There is no God but Allah. He has no partner. His are authority and praise. Good emanates from Him, and He has power over all things.’”

Ten months after the completion of his hajj, El-Hajj Malik El-Shabazz was assassinated on the stage of the Audubon Ballroom in New York City, a few months short of his 40th birthday. El-Hajj Malik’s family members were convinced that former associates in the Nation of Islam were responsible for the murder, and several—but not all—went to jail. Had he lived to 2014, the 50th anniversary of his pilgrimage, El-Hajj Malik El-Shabazz might have participated in the development of mainstream Sunni Islam among African-Americans. That development has been principally identified, by an irony of history, with the work of Warith Deen Muhammad (1933-2008), the son of Elijah Muhammad, a man very different from his father. Suffice it to say that the pilgrimage of El-Hajj Malik El-Shabazz transformed him and made him into a genuine Muslim. His tragic death prevents us from ever knowing how he might have evolved in later years, but even in his short life he offered spiritual seekers much to consider.

Patrick J. Ryan, S.J., is the McGinley Professor of Religion and Society at Fordham University in New York City.

Show Comments (
1
)
Comments are automatically closed two weeks after an article's initial publication. See our comments policy for more.
Christopher Rushlau
8 years 2 months ago
I think that's about enough sugar-coating. When did Malcolm X become El-Hajj Malik El-Shabazz: what was the pilgrimage that transformed him into a genuine Muslim? Was it his entire life, or the times he stood up for truth and justice at the risk of his self-image and convenience? Or was it when he flew over to Saudi Arabia for a few days? Is it true in fact that sacraments work like car washes, that all you need to do to benefit is roll up your windows and sit quietly? No, you did a pretty good job until you got to the end and it all kind of fell apart.