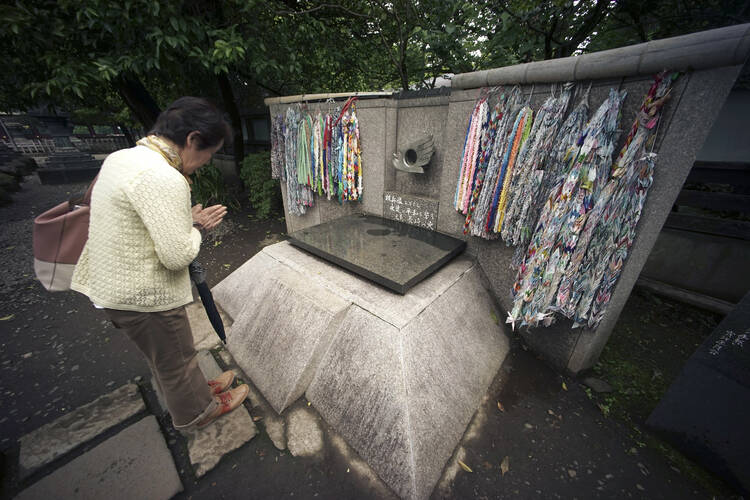 As President Obama prepares for his Group of Seven meeting in Japan and a visit to Hiroshima later this week, religious leaders and anti-nuclear activists have been urging him to seize the historic moment in a city once devastated by a U.S. atomic attack. They argue he should use the visit to press for the long-stalled nuclear disarmament agenda he outlined in a speech in Prague in 2009. Over 70 scholars and activists signed a letter released on May 23 urging the president to visit with Hibakusha, atomic bomb survivors, while in Hiroshima on May 27 and to announce concrete steps toward nuclear disarmament after the G7 economic summit in Japan.

“This is an extraordinary moment,” said American University Professor Peter Kuznick. “President Obama can either use it to further the cause of world peace and nuclear disarmament or he can use it as a cover for his militarization of the conflict with China and his trillion dollar nuclear modernization program to make nuclear weapons more usable. Such an opportunity may never come for him again.”

The letter signers complained that despite the significant achievement of the Iran nuclear deal and successes in securing and reducing nuclear weapons grade material globally, the president’s Prague agenda has been mostly stalled since the 2010 New START agreement with Russia, with no further nuclear weapons reductions achieved. They write:

With more than 15,000 nuclear weapons (93 percent held by the U.S. and Russia) still threatening all the peoples of the planet, much more needs to be done. We believe you can still offer crucial leadership in your remaining time in office to move more boldly toward a world without nuclear weapons.

Even as these leaders and activists urge a renewed press for disarmament, a controversial nuclear weapons modernization program is proceeding in the United States as other nuclear powers, the Russian Federation and China, have begun to consider or implement their own parallel modernization efforts.

The U.S. is on track to spend a trillion dollars over 30 years on the next generation of nuclear weapons and delivery systems. President Obama should cancel this spending, revitalize disarmament diplomacy by announcing a reduction of the U.S. nuclear arsenal, and challenge Russian President Putin to join in beginning negotiations to create the nuclear weapons-free world promised in Prague and required by the Nuclear Non-Proliferation Treaty.

In your Prague speech…you made it clear that one of your highest priorities was to seek ‘the peace and security of a world without nuclear weapons.’ We have been heartened by your steadfastness in hammering out and defending the agreement with Iran, and implore you to use the same energy to lead the way for Nuclear Non-Proliferation on a global scale.

The signees told the president that in December 2015, Pope Francis stated “a stark truth”:

Nuclear deterrence and the threat of mutually assured destruction cannot be the basis for an ethics of fraternity and peaceful coexistence among peoples and states. The youth of today and tomorrow deserve far more.… Now is the time to counter the logic of fear with the ethic of responsibility, and so foster a climate of trust and sincere dialogue.

The religious leaders said: “With Pope Francis we ask whether we dare continue ‘squandering the wealth of nations’ in this manner while there are so many pressing needs like health care, the alleviation of poverty, and economic development that truly serve the common good.”

Earlier this month the heads of four leading science and faith organizations similarly urged President Obama to use the Hiroshima visit to announce specific steps the United States will take to reduce the risks posed by nuclear weapons and prevent a new global nuclear arms race.

"Since Saint Pope John XXIII issued ‘Pacem in Terris' in 1963, the Catholic Church has called for a world free of nuclear weapons. Faith and reason, religion and science, agree on this issue," said Bishop Cantú, chairman of the U.S. Conference of Catholic Bishops' Committee on International Justice and Peace. "Nuclear weapons pose a moral challenge and represent an existential threat that requires action now.”