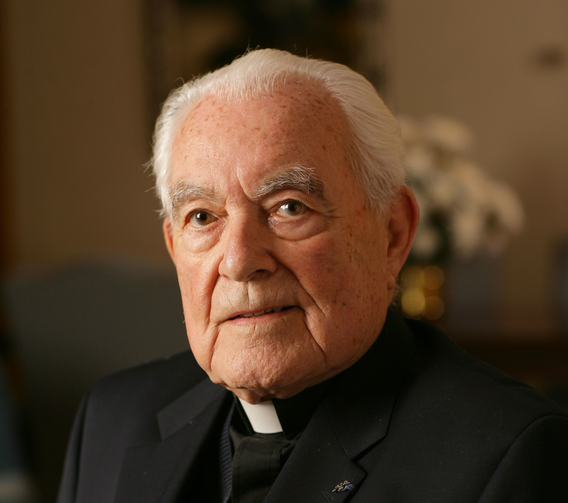 The University of Notre Dame website went dark on Feb. 26; it’s usually lively front page replaced by an image of Father Theodore Hesburgh and a quote from the same: “I never wanted to be anything but a priest, which is in itself a great and unearned grace. I hope to live and die a priest, nothing more, but nothing less either.”

Father Hesburgh, among the most influential Catholic priests in the history of the American church, had passed away at Holy Cross House on the campus of his beloved university at the age of 97, a priest with the Congregation of Holy Cross for 71 of those well-packed years. A Catholic leader in the American civil rights movement, social activist, advisor to both presidents and popes, a consistent innovator in higher education and, at 35 years, the longest-serving president of the University of Notre Dame, Father Hesburgh had an influence across a remarkable array of social, educational and economic developments in contemporary U.S. life.

The University’s of Notre Dame’s current president Father John Jenkins, C.S.C., said in a statement announcing Father Hesburgh’s passing, “Notre Dame lost a piece of its heart today, but Father Ted’s spirit lives on at Notre Dame and among the millions of lives he touched around the world. He is now with Our Lady, whose university he served so well, and with the Lord.”

By the end of his tenure as Notre Dame president he had transformed the university, nearly doubling its student body, moving it to mixed lay and religious governance in 1967 and in 1972 admitting women to the university for the first time, noting in his wry way, “If we say we are educating for leadership, we ought to educate the other half of the human race.”

Father Hesburgh rose to national prominence because of his vanguard role on civil rights. He was a founding member of the U.S. Civil Rights Commission in 1957 and was famously photographed joining hands with Martin Luther King Jr. at a 1964 civil rights rally in Chicago, singing "We Shall Overcome.”

Father Hesburgh was renowned for his personal warmth and cordiality; he even managed to charm Soviet Foreign Minister Vyacheslav Molotov, who once telephoned Father Hesburgh to express regrets at not being able to attend Mass and brunch with the priest during an U.N. atomic energy agency conference in Vienna. Less charmed by Father Hesburgh was President Richard Nixon, who had him removed from the Civil Rights Commission in 1972. “I said, 'I ended this job the way that I began 15 years ago—fired with enthusiasm,” he recalled in 2007.

His efforts to promote lay leadership and institutional independence at Catholic universities was also groundbreaking, while groundbreakings of a different sort came to be a regular occurrences at Notre Dame under his leadership, including the groundbreaking for a 14-story library that today bears his name.

So prolific were his social interests—from nuclear proliferation to civil rights to economic development—and numerous his Vatican and political appointments, a joke regarding the globe-trotting university president began to circulate on campus: “What’s the difference between God and Father Hesburgh? God is everywhere. Father Hesburgh is everywhere but Notre Dame.”

In an e-mail from Ireland, Sister Joan Chittister, O.S.B., who received her masters degree from Notre Dame in 1968, wrote:

"Father Hesburgh was a towering presence in society as well as at Notre Dame. The student body loved to pass the library’s  statue of Moses, arm pointed up at the sky, look up at the airplanes overhead and say, 'There goes Ted.'

"They knew, as we were beginning to realize, too, that Father Ted was a global figure. He stretched the local scene and everyone he met, as well. His vision embraced the world and his courage equaled it," Sister Chittister said. "Vision and courage are the marks and definition of greatness. Ted Hesburgh was an icon of both."

Father Hesburgh was born May 25, 1917, in Syracuse, New York, to Anne Murphy Hesburgh and Theodore B. Hesburgh, an executive of the Pittsburgh Plate Glass Co. He was educated at Notre Dame and Rome's Pontifical Gregorian University and was ordained a priest of the Congregation of the Holy Cross in 1943 in Sacred Heart Church, today the basilica, on the Notre Dame campus.

After doctoral studies he joined the university faculty, teaching in the religion department, and served as chaplain to World War II veterans on campus. In 1949 he was appointed executive vice president of Notre Dame. He became the university's 15th president in 1952.

In a statement today, President Obama wrote: “Michelle and I were saddened to learn of the passing of Father Ted Hesburgh. During his lifetime of service to his country, his church, and his beloved University of Notre Dame, Father Hesburgh inspired generations of young men and women to lead with the courage of their convictions. His deep and abiding faith in a loving God, and in the power of our shared humanity, led him to join the first-ever United States Civil Rights Commission, and join hands with Dr. King to sing ‘We Shall Overcome.’ His belief that what unites us is greater than what divides us made him a champion of academic freedom and open debate.

“When I delivered the commencement address at Notre Dame in 2009, I was honored to thank Father Hesburgh for his contributions to our country and our world. Father Hesburgh often spoke of his beloved university as both a lighthouse and a crossroads—the lighthouse standing apart, shining with the wisdom of the Catholic tradition, and the crossroads joining the differences of culture, religion and conviction with friendship, civility, and love. The same can be said of the man generations of students knew simply as ‘Father Ted.’ Our thoughts and prayers are with his family, his friends, and the Notre Dame community that loved him so dearly.”

Indiana Governor Mike Pence said in a statement: “Indiana has lost a man of unwavering faith, profound vision and monumental virtue in the passing of Father Theodore Hesburgh. An advocate for human and civil rights, education opportunity, and diplomacy both here and abroad, Father Hesburgh’s accomplished life epitomized servant leadership and made a critical impact in advancing and bettering our world. His legacy will endure always and, without doubt, will continue to inspire individuals across the world to pursue a life of peace and justice. The First Lady and I extend our deepest condolences to his family, the University of Notre Dame community, and all who knew and loved this exceptional Hoosier leader.”

A warm remembrance from Former President Jimmy Carter on Feb. 27 suggests the great breadth of Father Hesburgh’s interests and pursuits on behalf of peace and justice: “For 40 years, I have been blessed by the friendship and inspirational counsel of Father Theodore Hesburgh,” President Carter wrote. “Father Hesburgh has devoted his long and consequential life to serving humanity, always taking courageous stands on the serious moral issues that have faced our nation and the world—from his fight for civil and human rights and against nuclear proliferation and global hunger to his ongoing efforts to seek peace among people in conflict.

“As has every U.S. president since Eisenhower, I had the privilege of his advice and personal service when I was in office. His invitation for me to deliver Notre Dame’s Commencement address early in my Presidency provided a forum to inspire a new generation with the concept of human rights. His vocal concern regarding the treatment of immigrants led me to name him chair of the Select Committee on Immigration and Refugee Policy, and his recommendations served as the basis of crucial congressional reform legislation.”

President Carter continued, “Following up on a humanitarian fact-finding mission to the former Vietnam war zone with my wife Rosalynn, Father Hesburgh helped spearhead relief efforts that averted mass starvation among Cambodian refugees. Because of his progressive views about the role of science and technology in world development, I appointed him U.S. ambassador and chairman of the U.S. delegation to the U.N. Conference on Science and Technology for Development, the first time a priest had served in such a diplomatic role. He succeeded beyond expectations in all these tasks.

“Father Hesburgh has made the world a better place–for those of us whose lives he has touched directly and as an inspiration for generations to come.”

Kevin Clarke
@clarkeatamericaclarke@americamagazine.org
Show Comments (
2
)
Comments are automatically closed two weeks after an article's initial publication. See our comments policy for more.
JR Cosgrove
5 years 12 months ago
I was in an audience once when Fr. Hesburgh was speaking. He said he always tried to say Mass every day because one day he was going to die and he wanted to say Mass that day. I don't know if he said Mass the day he died but his determination to do so always stayed with me. A truly great man.
Bill Mazzella
5 years 12 months ago
Perhaps John Tracy Ellis, the prominent Catholic historian, said it best that when comparing Ted Hesburgh to the rest of Catholic leaders, especially the bishops, in this country that "It was not even close." He was a champion of the environment before it became fashionable. He was so present for God in so many areas that one is in awe how he let God do so much through him. It must have saddened him to see all the rancor in the world today. He was able to break down barriers. Not just bloviate without building. In Ted Hesburgh the words of Paul the Apostle resound. "Where Grace superabounds." We are blessed to have him in our midst. May the Lord bless and keep him.