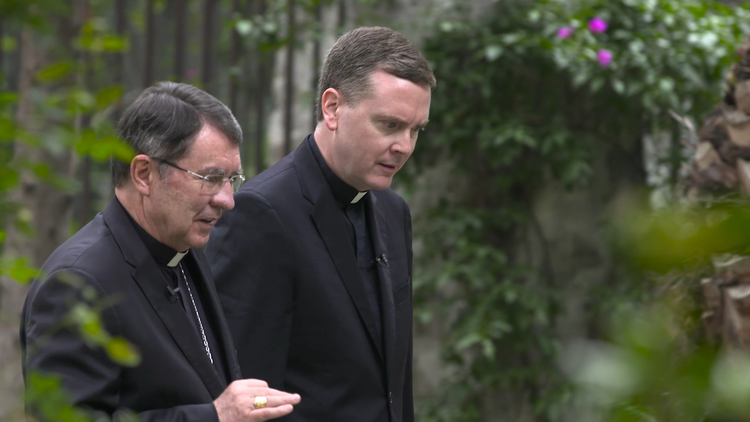 Letting actions speak for words and ultimately for truth seems to be the intention of the new apostolic nuncio to the United States, Archbishop Christophe Pierre, as he begins his latest North American appointment. In an exclusive interview with America conducted in Mexico City on May 31, Archbishop Pierre suggests he is not interested in engaging in a cultural battle when he begins his new assignment in the United States.

“Should we fight our truths against other truths?” he asks. “No. I don’t think so. I think what we have [to do] is to let Christ transform us, tell us what is the way of the truth.”

Pope Francis, he adds, is helping us discover “that the way to know the truth is also love, charity, the kind of deep tolerance that is not relativism. It’s something different.”

In a rapidly secularizing society, he believes that evangelization through Christian witness should be a primary obligation of the church. He warns against the temptation “to close ourselves in ideology” and urges a church that encourages all its members to serve as exemplars in society, as “disciples of Jesus.”

“Our faith is the encounter with a person,” Jesus Christ, “who changes our life and opens a new perspective in our life,” Archbishop Pierre told America’s editor in chief, Matt Malone, S.J. “Otherwise, we will reduce our faith to an ideology. Ideology will die, but the person of Christ will never die.

“I think the pope is asking us to become Catholics in all senses of the word,” Archbishop Pierre said. “The Catholic is not the person who just defends a position and ideology, a moral. The Catholic is a disciple of Christ. This quality of discipleship of Christ will change the life of the person, make this person a missionary and organize his life, I would say, according to his faith.”

To serve as effective evangelizers, the impact of Christ on our lives should be obvious to all. “People will say, ‘This man, this woman, this child, is a believer. You see it through his behavior.’ The pope impresses the people precisely because they say, ‘This is a man of God.’”
Archbishop Pierre added: “I think a priest should be a man of God. Not just a bureaucrat.”

The archbishop said he kept a keen eye on Pope Francis during the pope’s visit to Mexico last February. The pope has always been careful, according to Archbishop Pierre, to pay special attention to people who suffer. “This is a priority in the church,” he said. The societies he has lived in as a church diplomat, primarily in Africa, “produce many people who suffer.”

“When we speak about the social doctrine of the church, we always say the church is about the centrality of the human person. It’s about solidarity, it’s about humanity, about justice. These are not ideas; these should be behaviors. The church should practice social justice” in all senses of the phrase. “Respect life from the beginning to the end,” he said, “but respect also work for justice, work against inequalities. All these things.”

As for his new appointment, Archbishop Pierre told Father Malone that he looks forward to learning about the United States “from the inside,” after years of watching it from societies tremendously influenced by policies and events in the United States. He added, “I’m a bit afraid because I know that I have to discover a lot.”

Why he was selected for this pivotal position for the global church, Archbishop Pierre could not say. But he was certain that evangelization has become a primary concern of the pope, an evangelization driven by closeness, by being with people rather than over them. “I’ve seen a pope who is very concerned about getting near to the people.”

He added, “This is very coherent with his main documents, particularly, ‘Evangelii Gaudium.’”

What Pope Francis wants, he said, is a church “open to the people in order to announce the Gospel.”

Archbishop Pierre has for the last nine years served as papal nuncio to Mexico. He comes to Washington as an experienced diplomat, with first-hand knowledge of the dramatic plight of migrants from Central America and Mexico to the United States, and will be able to give voice to Pope Francis’ concern for them. A native of France, he was ordained in 1970 and first joined the church’s diplomatic service in 1977. He has served in Mozambique, Zimbabwe, Cuba and Brazil and at the Permanent Observer Mission of the Holy See to the United Nations in Geneva.

In July 1995 St. John Paul II named him an archbishop and appointed him as apostolic nuncio to Haiti. He served there until 1999 and then was named nuncio to Uganda. He remained in Africa until 2007, when he was appointed to Mexico. The Vatican announced his new appointment to the United States in April. He will succeed Archbishop Carlo Maria Viganó, who has been the U.S. nuncio since 2011.

Archbishop Pierre believes evangelization through encounter will characterize his mission in the United States, something he believes Pope Francis is modeling for all members of the church. “You have to be with the people, to know them, to be close to them,” he said. Very often, he said, “we fall into the temptation to put our ideas first, to adjust the Gospel to our ideas.” But it is the contrary that should be true.

Gospel values, he adds, “are not ideas,” but “behaviors.”

There is a method to understanding the Word of God, the archbishop said: listening to it in prayer. “It is letting ourselves be converted. Only people who have been converted by the word of God will be able to offer to the world what God, through Christ, wants us to be.” That, he believes, is to serve as “witnesses.”

“We are the presence of Christ in the daily life, in this society. We are being sent to be the witnesses of his presence, of his love, of his values, the values of the Gospel,” he said.

Kevin Clarke
@clarkeatamericaclarke@americamagazine.org
Show Comments (
7
)
Comments are automatically closed two weeks after an article's initial publication. See our comments policy for more.
Bridget Taumoepeau
4 years 11 months ago
What a wonderful man - lucky USA to have him as the Nuncio. A true representative of Francis.
William Rydberg
4 years 11 months ago
The flaw in this approach likely has its source in contemporary Jesuit spirituality. Unlike the Russian Orthodox Church approach (note Patriarch Kyril's visit to Mount Athos with Russian President Putin) there is no time for public acknowledgement of the Numinous. Kind of sad in my humble opinion, because I like to think that Pope Francis is personally deeply spiritual... But its simply not enough to show up. The Numinous must be discussed in public. If it is, its not being heard here in North America. I pray that one day we Roman Catholics can again plot a middle path in the public sphere which also includes the Numinous. As for the Jesuit Order, in the recent half century or more, Protestant protestations about their being "too spiritual" have found purchase. Lets hope that the Pope's raproachment with the Russian Orthodox will yield fruit. Just my opinion, in Christ, Blessed be the Trinity
Lisa Weber
4 years 11 months ago
He sounds like someone who understands both the Gospel and evangelization. I think we are fortunate to have him here in the USA.
Thomas Farrelly
4 years 11 months ago
"Archbishop Pierre added: “I think a priest should be a man of God. Not just a bureaucrat.” " What priests? More and more parishes have no priests. Sorry you didn't ask the Nuncio about this.
Mike Evans
4 years 11 months ago
Gosh, if our priests and bishops really believed in a preferential option for the poor, perhaps they would lobby much more heavily for state houses and congress to pay attention and set aside funding to assist those 20% of our population who suffer needless impoverishment. Instead, too many of our politicians on both sides are concerned with false issues of potential fraud and a belief that only the very deserving poor should be served and those only at a minimal level. We as a country punish our poor for being in dire straits, our generosity severely limited to non-governmental agencies who are the only responsive effort. The church of the past used to lead the way; today it leads only to its own agenda of condemnation and rule making.
Joseph Keffer
4 years 11 months ago
In case others are also wondering: "Numinous | Numinous Definition by Merriam-Webster www.merriam-webster.com/dictionary/numinous Merriam‑Webster Numinous is from the Latin word numen, meaning "divine will" or "nod" (it suggests a figurative nodding, of assent or of command, of the divine head). English speakers have been using "numen" for centuries with the meaning "a spiritual force or influence."
Vincent Gaglione
4 years 11 months ago
" Gospel values, he adds, 'are not ideas,' but 'behaviors.' " ..... "And when “you listen to the Gospel, when you follow Christ, Christ is asking you to be very radical,” he said." These words made me think of the Diocese of Orlando's website in which I read of Bishop Noonan's and the diocese's response to the Orlando shootings. An interfaith service in the Cathedral to unify the citizenry, the provision of diocesan manpower to aid survivors and families of victims, no matter their personal lifestyles, that pretty much sums up what the Nuncio meant, it seems to me. I often wonder why, when any of these national or international tragedies occur, one finds little in the way of visible reactions and responses in most of the nation's Catholic dioceses and parishes. It is as if some Catholic Bishops are totally unmoved and uninvolved. I would think that those who would evangelize in Christ's name would do something more than issue a press release offering condolences and asking for prayers. To be repetitive, "Gospel values, he adds, 'are not ideas,' but 'behaviors.' "