Catholic and Lutherans highlight 50 years of effort toward unity 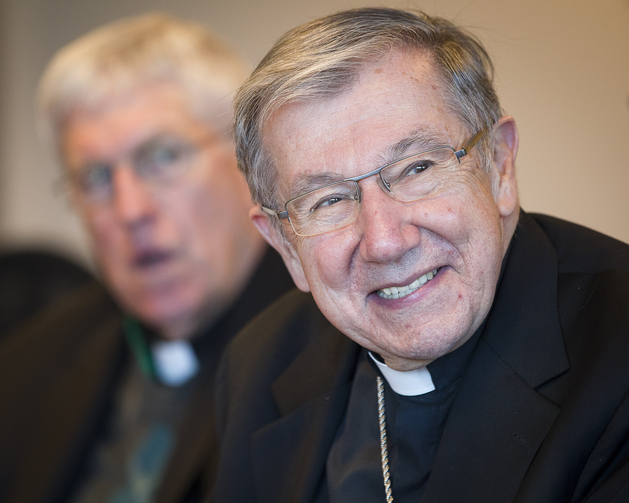 Lutheran and Catholic theologians are getting on great these days, and at the highest levels of the two churches bishops across the denominational divide have taken to sharing celebratory high-fives, says ELCA Presiding Bishop Elizabeth A. Eaton. The bishop is more than pleased with progress Lutherans and Catholics have made toward a unity broken 500 years ago, but how well do the people in the separate Catholic and Lutheran pews understand that progress?

A new publication developed jointly by theologians from the two Christian churches is intended to get that message out to everyday Catholics and Lutherans. Drawing on decades of national and international dialogue, the two churches together have issued the "Declaration on the Way: Church, Ministry and Eucharist." Released on Oct. 30 to mark the eve of the anniversary of Martin Luther's posting the 95 Theses, which sparked the Protestant Reformation, the declaration includes 32 “Statements of Agreement” on church, ministry and Eucharist issues on which Lutherans and Catholics have already achieved consensus. The church leaders emphasized that these agreements signal that Catholics and Lutherans are indeed “on the way” to full, visible unity. The document also notes the differences which remain between Lutherans and Catholics and suggests possible ways forward.

Bishop Denis Madden, auxiliary of the Archdiocese of Baltimore, discussing the release with Bishop Eaton during a telephone conference on Nov. 4, hopes study of the declaration may lead to more combined celebrations between two communities divided by the same religion for almost 500 years. Major components of that divide were closed and the reformation technically ended in 1999 with the Joint Declaration on the Doctrine of Justification (JDDJ), signed in Augsburg, Germany. How to breathe pastoral life into that changed relationship is part of the goal of the new publication.

Bishop Madden said there are already accepted provisions that help prepare ecumenical gatherings at which “both Lutherans and Catholics can come together at the communion table,” and he hopes the declaration will encourage pastors from both denominations to “take advantages of those provisions and how they might be widened.”

Bishop Eaton agreed that such efforts might begin to “bring us to our ultimate goal and ultimate longing, which is to join us together at the Lord’s table.”

"Pope Francis in his recent visit to the United States emphasized again and again the need for and importance of dialogue. This Declaration on the Way represents in concrete form an opportunity for Lutherans and Catholics to join together now in a unifying manner on a way finally to full communion," said Bishop Madden. He was the Catholic co-chair of the task force creating the declaration.

Calling the document’s release a “a historic moment for our churches,” Bishop Eaton said, “People might not understand and miss how significant this is.

“[On 32 points] we are now longer divided. It's amazing to think that 500 years ago we were killing each other over these issues,” said Bishop Eaton.

“[Bishop Madden and I] grew up in a time when our communities were absolutely separated; now instead we are rejoicing in the places we find agreement," she said.

Recalling a recent meeting with Bishop Madden, she added, “We actually exchanged a high five about this; this is not something that would have happened 50 or 500 years ago. This has been truly remarkable progress.”

The two church leaders did note that there were still difficult barriers ahead to a full union between the two denominations. The different understanding of the nature of the Eucharist has been an issue of the greatest progress, they said, but one, like women’s ordination, that remains a challenging obstacle to fully resolve. Lutherans have been ordaining women since 1970; the Catholic Church teaches it has no authority "to confer priestly ordination on women.”

The role of the “bishop of Rome” remains an issue Lutherans have trouble understanding, Bishop Eaton acknowledged. The challenge now is “how do we walk back 500 years of terrible misunderstandings and, on our part, unfortunate caricatures" of the pope’s ministerial role.

"We are really sorry for some of the things [Martin] Luther said about [the pope] back in the day," she said, noting, “He got a little earthy.

“But we really like this one (Pope Francis) a lot," she quickly added.

The bishops did not downplay those issues which still divide Lutherans and Catholics, but wanted to “work from the vantage point of where we agree rather than those things which divide us.” Quoting the document, Bishop Eaton said: “‘Catholics and Lutherans agree that the church on earth is mandated to carry out a mission in which it participates in God’s activity in the world by evangelization, worship, service of humanity and care for creation. The church’s ultimate goal is consummation in God’s kingdom, for God will create an eternal reign of righteousness, peace and love.’…

"These are not obscure points,” she said. “This has to do with our life together.”

Noting wryly that those who hate and persecute Christians around the world make little distinction between denominational differences, she added, “Perhaps it is time for us to catch up to the high ecumenism of those who are persecuting Christians.”

The document's introduction notes that over 50 years of dialogue the two churches have come a long way since "the disunity, suspicions and even hostilities that characterized our relationships for generations.” It argues the time has come "to claim the unity achieved through these agreements, to establish church practices that reflect this growth into communion and to commit ourselves anew to taking the next steps forward."

It declaration recommends that the Lutheran World Federation, a global communion of 145 churches in 98 countries, and the Pontifical Council on Promoting Christian Unity jointly "receive, affirm and create a process to implement" the 32 statements of agreement outlined in the declaration and to establish "a process and a timetable for addressing remaining issues on church, Eucharist and ministry."

"The expansion of opportunities for Catholics and Lutherans to receive holy Communion together would be a significant sign of the path toward unity already traveled and a pledge to continue together on the journey toward full communion," the task force concluded.

In addition, the task force urged action and study at the local level between Lutheran congregations and Catholic parishes, as well as formal and informal cooperation among bishops of both denominations at the regional level.

The declaration is not a statement of the full body of Catholic bishops, but was affirmed in October by the ELCA Conference of Bishops, an advisory body, which asked the ELCA Church Council to forward the document to the 2016 ELCA Churchwide Assembly, its highest legislative body.

Bishop Madden said the Catholic bishops are not scheduled to vote on the declaration during their Nov. 16-19 annual fall assembly in Baltimore but that he hoped it would be the topic of much discussion among the bishops.

"We want all the bishops to know about this declaration and help promulgate it in their own dioceses," he said.

Kevin Clarke
@clarkeatamericaclarke@americamagazine.org
Show Comments (
3
)
Comments are automatically closed two weeks after an article's initial publication. See our comments policy for more.
Gerardine Luongo
5 years 9 months ago
This was written a few years ago, the but the debate was intense and, actually sad. http://www.firstthings.com/web-exclusives/2009/11/a-catholic-among-the-evangelicals
Chris Miller
5 years 9 months ago
for anyone who is interested, there is a free d/l of this document on the ELCA.org site. Pr Chris
alan macdonald
5 years 8 months ago
The only reasonable chance of reconciliation with the Roman Catholic Church is with the Eastern Orthodox Church, comprising the two lungs of the Church. This is where a possibility remains, not with any Protestant Church.