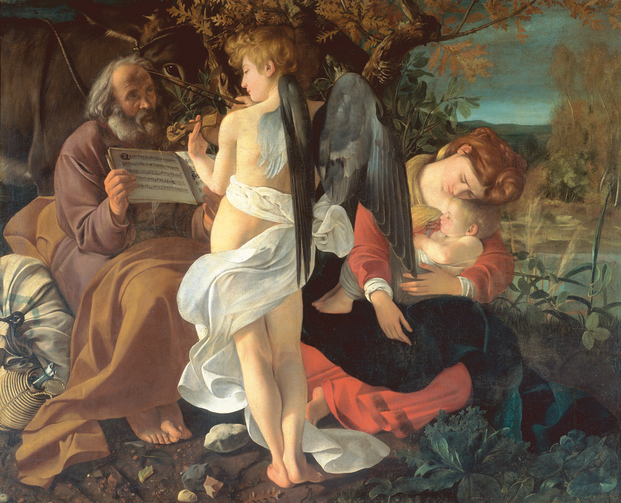 The mother and child cuddle, both asleep, her cheek resting on his head. It’s easy to imagine the child’s rhythmic breathing, the softness of his hair on her face, the weight of his warm body in her arms. The painting is an early Caravaggio. For what it lacks in the severe chiaroscuro that became the artist’s signature style, “Rest on the Flight Into Egypt” (1594-96) compensates with the realistic emotion portrayed by its subjects. While Mary and Jesus sleep, Joseph stares in awe at an angel serenading them on violin and holds his music.

Historians have long fixated on Caravaggio’s figures of Joseph and the angel, but a new exhibition at the National Museum of Women in the Arts in Washington, D.C., turns the focus to Mary, who, with Jesus, is the painting’s true subject, said guest curator Msgr. Timothy Verdon, who also is the American director of the Museo dell’Opera del Duomo in Florence, Italy, and author of several books on Marian and other religious art. The Caravaggio joins works by Michelangelo, Botticelli, Dürer and other masters in “Picturing Mary: Woman, Mother, Idea,” on display through April 12.

Although the National Museum of Women in the Arts typically focuses on women artists, this ambitious exhibit explores a particular woman—the most depicted woman in art. Monsignor Verdon said he hoped the exhibition would allow the works to achieve their original purpose: touching people’s hearts, if not in a religious dimension, given the exhibition’s secular location, then in a human dimension.

The exhibit unites more than 60 artworks from the Vatican museums, the Louvre, the Uffizi and other public and private collections, as well as the collection Monsignor Verdon oversees at the Florence cathedral, for the ambitious purpose of showcasing Mary in Renaissance and Baroque art.

“Picturing Mary” adheres to its subtitle, ruminating on Mary as the ideal woman, the mother of Jesus and an idea beyond her person, with titles like “Seat of Wisdom” or “Mystical Rose.” Of these themes, Mary’s motherhood comes to the fore.

During a tour of the exhibit, Monsignor Verdon highlighted the realistic vision of motherhood expressed by Caravaggio’s “Rest on the Flight into Egypt”—Mary’s exhaustion coupled with the child’s cheeks still rosy from nursing as he rests against her breast. “This is one of the most wonderfully delicate human images of the mother and the child in the whole exhibit, and I think perhaps in the whole history of Western art,” he said.

This late 16th-century painting contrasts with earlier medieval and Renaissance works, where Mary is typically shown either adoring her child or sitting regally with Jesus on her lap. As the exhibition demonstrates, the role of Mary in art evolves from God-bearer to a nurturing mother to emphasize her son’s humanity.

Opened in 1981, the National Museum of Women in the Arts is the world’s only major museum dedicated solely to women in the arts. Although most works in “Picturing Mary” are by male artists, the exhibition includes contributions from four women. Their portrayals of Mary are not significantly different from those offered by their male counterparts, Monsignor Verdon said, but they do occasionally offer a more intimate rendering of their subject. One example is Artemisia Gentileschi’s “Madonna and Child” (1609-10), in which Mary offers her breast to the toddler Jesus. The child’s eyes are locked on his food source, the cherries he grips forgotten.

As the mother of a toddler, I am more than familiar with the child’s expression and my own son’s demands to nurse and the feel of his hair against my cheek intimated by Caravaggio. It is this universal experience of motherhood that makes this exhibition attractive and accessible to nonreligious viewers, without diluting the artworks’ meaning to the devout. Certainly, great theological themes can be extracted—the hypostatic union, the mystery of a virgin birth, Mary’s role in the Incarnation. The focus, however, centers on a real woman who had a son and who shares with all mothers the resulting love, joy and anguish.

“Picturing Mary” includes images of Mary tickling Christ, pressing her face close to his and restraining his squirming body. These playful moments juxtapose a 17th-century work by Orsola Maddalena Caccia, an Ursuline sister, where the sleeping baby Jesus sprawled across Mary’s lap suggests the Pietà.

The exhibition’s portrayal of motherhood’s goodness and beauty are timely. It engages a culture filled with complicated, and too-often negative, views of motherhood: the purported War on Women; the mommy wars, which pit moms who work outside the home against those who stay home; pervasive “mom guilt” about not reaching Pinterest-set standards; the ever-present debate on whether career-focused mothers can or should have it all; societal upheaval over the meaning of marriage, family and gender; and the popular idea that motherhood (and fatherhood) are just one more lifestyle choice, instead of each generation’s desire to participate in the awesome responsibility of co-creating with God.

Far from belittling motherhood, “Picturing Mary” elevates it by focusing on the very woman who never dreamed she would be a mother, and whose fiat defined not only her but all of humanity. This idea greets visitors near the exhibition’s entrance. In gold text against a blue wall, stanzas from the last canto of Dante’s “Paradiso” provide context:

Virgin mother, daughter of your Son

Humbler and higher than any other creature

You are she who so ennobled human nature

That nature’s very Maker did not disdain

To himself be made by you.

In exploring Mary as mother and mystery, “Picturing Mary” compels visitors on their own small pilgrimage to encounter their own experience of motherhood and to confront the happy consequence of Jesus having had a human mother too.

Maria Wiering is the incoming editor of the biweekly Catholic Spirit, of the Diocese of St. Paul and Minneapolis, and holds a master’s degree in art history from the University of St. Thomas.