More Disappeared on the Way North, More Mothers in Sorrow: They band together to search for sons, recover their bodies 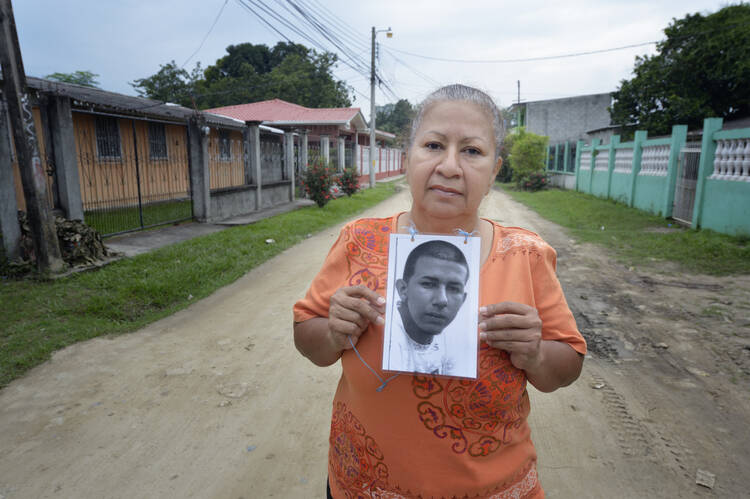 Some of those who set off from Central America's troubled communities and wind their way north toward the American dream get lost along the way. Their family members back home often never learn what happened to them.

Yet hundreds of women in Honduras have joined together, determined not to suffer alone.

"Our committee was born from the anguish of so many mothers crying for their lost children and not knowing what to do about it," said Rosa Nelly Santos, coordinator of the Committee of Mothers of Disappeared Migrants.

Like other immigrant groups throughout the country, the mothers committee has its roots in the church. Created in 1999 with help from the Jesuits, the group later became independent of the church and has become "the most important group in Central America for setting a new agenda based around the experience of the victims themselves," said Jesuit Father Ismael Moreno, director of the Center for Reflection and Scientific Investigation in El Progreso. "It's helping to spark the creation of new groups, all giving voice to people who have not been heard in the discussions about immigration."

The mothers' group hosts a weekly radio program to discuss immigration-related topics, provides individual and group counseling for family members, and sponsors raffles to raise money to repatriate the remains of loved ones who died in Mexico or the U.S. It has worked with a group of forensic anthropologists from Argentina to do DNA testing; more than 200 blood samples have been taken from migrant relatives in the El Progreso area, to date yielding the identification of two migrant cadavers. Two more tentative identifications are pending.

The committee has helped sponsor a yearly caravan of mothers traveling to Mexico in search of their loved ones. Catholic migrant shelters and activists host the mothers as they travel around Mexico showing photos of their loved ones, asking for help in locating them.

Vilma Maldonado went on the last caravan in November. Her son Jesus last called her from Mexico in 2011, and she has since heard nothing. She discovered some clues to his fate on the most recent trip and said church activists in Mexico are continuing to investigate.

"When I came home, my 5-year-old grandson Alexander asked me if I had found his father. I told him I had not. He told me to go back to Mexico and find him, that I couldn't leave him there," she said.

Maldonado said being part of the mothers' committee helps her keep up her spirits as she continues to search for her son.

"Having other women to be with is a big help for me. Each of us feels supported by the others. The tears of one are the tears of all, whether we're crying with joy or with sadness," she said.

Maldonado did not feel the same support in Mexico.

"In Mexico they don't like Central Americans and they treat us like delinquents. But our husbands and sons and daughters aren't criminals. They are international workers and they should be allowed to pass through Mexico. They want to work, not stay in Mexico where there's crime and drugs and the Zetas and cartels. Mexico is a cemetery for migrants. We went to one mass grave for migrants and it was in a garbage dump. That's where they bury our loved ones," Maldonado said.

The mothers complain that their own government isn't much better.

"Our government does nothing for us. They don't even know we exist. If we need help with repatriating someone's body, they don't want to help. We have to hold raffles to pay to bring bodies back. All the government cares about is that the migrants who arrive at their destination keep sending remittances. But those who don't arrive, who are captured by the gangs or induced into prostitution or mutilated by the train, no one cares about them," said Edita Maldonado (no relation to Vilma Maldonado), a mother in El Progreso who found her missing daughter in Mexico in 2000.

Edita Maldonado said that although the large number of children arriving on the U.S. border last year has increased the spotlight on immigration and produced funds for the government to open temporary shelters for returned children, nothing fundamental has changed.

"Our children have been leaving for a long time. No one wanted to know anything about them before. Now it's a big business, so the government is paying attention. They get money to put up shelters and supposedly care for them. Yet the money doesn't end up with the children and their families, but rather in the pockets of the people in the government," Edita Maldonado said.

"And our children continue leaving."