The 18-month prison sentence begins for man behind "Vatileaks" 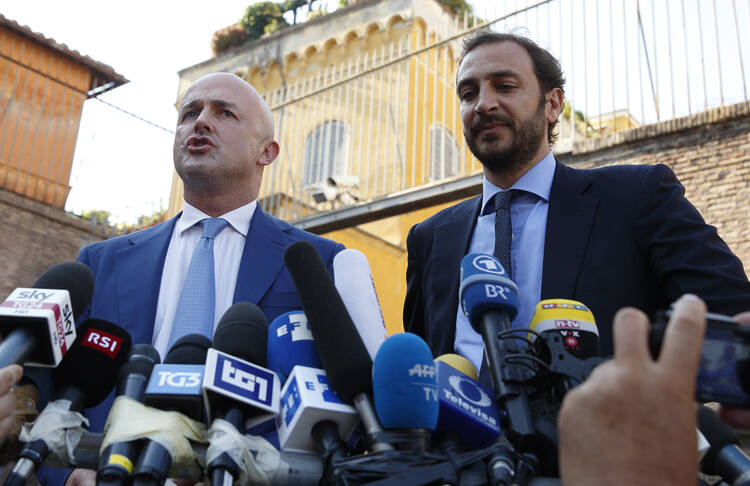 A Spanish monsignor found guilty of leaking confidential documents about the Vatican's financial reform has begun serving his 18-month prison sentence at the Vatican.

Msgr. Lucio Vallejo Balda, secretary of the Prefecture for the Economic Affairs of the Holy See, was found guilty on July 7 of stealing and passing on documents to Italian journalists Gianluigi Nuzzi and Emiliano Fittipaldi.

"The sentence became definitive," Greg Burke, Vatican spokesman, told Catholic News Service on Aug. 30. In accordance with Vatican law, the prosecution had 40 days to contest the sentence, which had been considerably reduced from its original request.

Following the court's ruling, Msgr. Vallejo Balda was allowed limited freedom of movement within the confines of Vatican City State. However, he was formally arrested Aug. 22 by Vatican police and placed in a prison cell to begin his sentence.

The cell is located in the building of the Gendarme Corps of Vatican City State, as the Vatican police force is formally known. It is presumed to be the same cell prepared for Paolo Gabriele, the former papal butler who leaked reserved papal correspondence in 2012. Gabriele was pardoned by Pope Benedict XVI after serving less than three months of an 18-month sentence.

While confirming that Msgr. Vallejo Balda is allowed visitation, Burke declined to comment further on the conditions of his imprisonment.

Francesca Chaouqui, a member of the former Pontifical Commission for Reference on the Economic-Administrative Structure of the Holy See, was given a 10-month suspended sentence for her role in encouraging the leaks while Nicola Maio, Msgr. Vallejo Balda's former assistant, was found not guilty and acquitted of all charges.

The information leaked by Msgr. Vallejo Balda was published in Nuzzi's book, "Merchants in the Temple," and Fittipaldi's book, "Avarice." Both books focused on the irregularities uncovered by the commission Pope Francis established to study the financial activity of Vatican offices.

Citing freedom of the press, Judge Giuseppe Della Torre, head of the tribunal of the Vatican City State, also acquitted Nuzzi and Fittipaldi, declaring that the court had no legitimate jurisdiction over the journalists.

Chaouqui, who has continued to comment on the case on her various social media accounts, posted pictures Aug. 9 of a Facebook account she claims Msgr. Vallejo Balda opened after the trial.

During the trial, Msgr. Vallejo Balda was briefly under house arrest before he was remanded back to a Vatican jail cell in March after it was discovered he violated the terms of his house arrest by communicating with the outside world.

His alleged Facebook account, Chaouqui wrote, is an attempt to "convey information in order to rehabilitate his destroyed image as a priest and a human being." She also issued a warning to those who engaged in conversations with him.

"Be clear that at the first breeze, smell or breath that my name turns up in your conversations, I will launch such a legal battle that you will have to sell the corneas (from your eyes) to pay me back," she wrote.