The Monk and Me: New habits of friendship 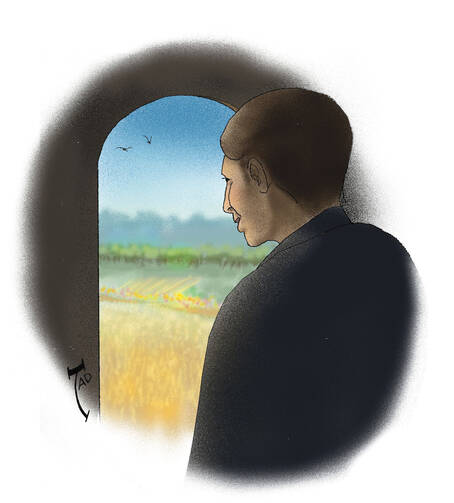 I met the monk, before he was a monk, on Facebook. The message icon flickered to life when an actor we both know made the connection: two writers, two creative people, two weirdoes, two Catholics. Perhaps we’d like to get acquainted? The monk back then had a different name; let’s call him Anthony, the desert father, the first monk. I went into the café where he worked, a busy spot near the school where I teach, and introduced myself. We were both members of the vanishing demographic of 30- and 40-somethings in our respective parishes, both taller than average, both of us crazy for Baroque music and difficult books, both of us, back then, just finding our way into a life of faith. I had returned from a 20-year lapse; he’d just been baptized. We were, back then, new arrivals to this messy thing called religion.

Anthony’s parish was shrinking; even at the Easter Vigil its pews were half full. But he had wandered in during his search for a church, at a time when he could barely articulate the thing that was pulling him into religion, which hadn’t been a particularly pressing issue during his childhood and had played almost no part in his adult life up until then. A charismatic pastor and a small but fiercely loyal congregation made it easy to go, week after week, to ask questions and have them answered, to begin the Rite of Christian Initiation of Adults, to be the single person baptized at the Easter Vigil. As an actor, he was used to having lights on his face; his parish rents a humming spotlight at Easter and shines it onto the baptismal pool. One new Catholic is wrapped in a white garment, and the entire church applauds him.

Even at the beginning of his walk, thoughts about vocation filtered through Anthony’s consciousness. He read Mary Doria Russell’s The Sparrow and considered becoming a Jesuit; he got to know some of the local Dominicans and took my husband and me to a Christmas concert at their priory. Then one year, a Benedictine began attending Anthony’s parish; we were eating Chinese food together when Anthony told me he was thinking about meeting the Benedictine vocation director.

I have friends who are priests. We text; we tweet; we go out for cocktails and eat enchiladas and see movies. They have iPhones and laptops and live in community, but they do not live away from the world. Like me, they are always in it. Like me, they are able to choose when they come and go. Anthony will not be able to leave the monastery for a full year during his novitiate. His time on the computer is limited, and using the phone is difficult. The closest city is an hour’s drive. Needless to say, he doesn’t have a cell phone.

But before he was a novice, Anthony went off to the monastery as a candidate. He left his job and packed up his apartment, and I drove to pick up him and his remaining belongings: three boxes and a backpack. The rest had been donated and given away. On his final night outside the monastery, we sat in front of my laptop and looked at pictures of where he was going. He’d been on several vocational retreats; now the rubber would meet the road. Each part of the monastery had a story he could already tell. The characters behind the austere looking faces of the Benedictines came to life in my friend’s voice. And the next day, I drove him to the train station, and for three months he entered that life.

Benedictines give candidates a month’s break before they enter the novitiate. So Anthony came back. I picked him up once again at the train station and found my friend dazed after hours of travel. The daze lasted for several days. He’d vanish every couple of hours into the room I use as an office, his breviary shoved into a pocket. I’d forgotten about the Liturgy of the Hours. In fact, I could barely recall which one was Compline and which one was Lauds. One night, I overheard him talking with my husband in the kitchen: “So what exactly are vows?” asked the guy I’d married, sincerely curious to find out. And my friend explained poverty, chastity and obedience as I eavesdropped from the living room.

What is it like having a friend who’s a monk? On the one hand, I think about the things we can’t do. No more concerts, or brunch after Mass. No more conversations over the counter of the café where he worked, no waving hello as I troop by on my way to a day of teaching. When I tell friends from the secular world that my friend is in a monastery, they’re not hostile; they’re fascinated. They imagine bread and water, hair shirts, cheese making, beer with a high alcohol percentage. I know from our conversations that it’s more like cafeteria food and vocational classes. Hard physical work and hard mental work. Prayer, prayer and more prayer. Long solitary walks on the monastery grounds, days structured around the Rule of Saint Benedict, days patterned after a way of life that’s gone on for 1,500 years. Even the most faithful of my friends who aren’t vowed religious pray maybe once or twice a day, and it’s often hasty and untidy, because we are bombarded by life. To know a monk means knowing someone who is a professional at prayer. In comparison, everyone else is going to be an amateur.

When friends say they’ll pray for me, my first instinct is to laugh. Why me? Why not those people dying in Sudan, the writer my age with aggressive breast cancer, the priest with senile dementia losing his way during Mass? I am a relatively healthy, somewhat gainfully employed person who gets paid to teach people to write. But when the monk says he’ll pray for me, I understand something else: that there is a calling to live life just for God, to be awake early to pray in song, to end each day prayer. The conversation of life becomes one in which God is constantly listening. It is not a calling I’ll ever share, and it is one most people will struggle to understand. In the past, there were hundreds of men at his monastery. His novitiate class consists of two, both of them guys who had lived for decades in the secular world, who had stewed and discerned before choosing a life that, from the outside, makes little sense. When people imagine the life of a monk or a cloistered nun, they imagine what is given up, not what is gained. For those who choose a monastic path, prayer becomes life, and it becomes action. Work is prayer, community is prayer. Breath, too, is prayer and life.

I open Facebook. There is a picture of Anthony, now rechristened with a monastic name. There was already a Brother Anthony, so he had to have a new name; but more, he wanted a new one. A new form of life is, after all, a rechristening, a new way of being made Christ. Before my own confirmation at the age of 38, I’d paged through a book about saints, trying to find the name that the priest would give me, the name of the saint who would guide my path, a name that would be known only to a handful of people. It is my secret name; no one uses it except me. But now my friend is called only by his monastic name. His emails come addressed from this new person. Packages of coffee and books I send his way are labeled to the name the abbot bestowed on him. It is the name of a saint who was known for his humility and love of the poor, given to my friend, who has always given so much of himself to others and to God. A few clicks, and there are the photographs of him shouldering his way into his new habit, black and hooded. He smiles. He looks like himself.

Kaya Oakes teaches writing at the University of California, Berkeley. Her next book is forthcoming from Orbis Books in 2015.