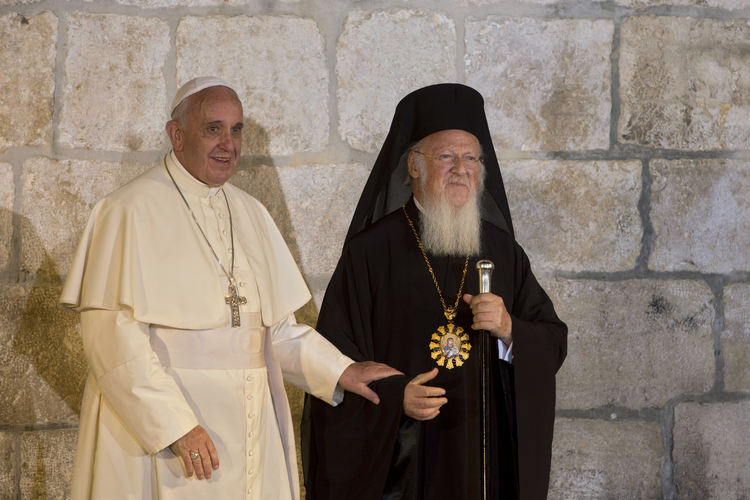 When Pope Francis and Ecumenical Patriarch Bartholomew I, the spiritual leader of the world's Orthodox Christians, visit migrants on the Greek island of Lesbos this weekend, they'll be doing more than sending a political message about the need to welcome refugees.

Christianity's two most important leaders, still officially divided by a thousand-year schism, will be speaking with an increasingly unified voice that has gone beyond the realm of religion to confronting pressing issues such as climate change and humanitarian crises around the globe.

The visit, which comes on the heels of Francis' historic meeting with the head of the Russian Orthodox Church, is evidence of an increasingly important Catholic-Orthodox partnership that has been strengthened by shared concern for Christians being exterminated by Islamic extremists in the lands of Jesus' birth.

Francis has called these indiscriminate attacks on Christians—Catholic, Orthodox and others—an "ecumenism of blood," and it wouldn't be surprising if he uses the term again on Lesbos when he meets with refugees fleeing Syria, Iraq and elsewhere.

"The ecumenical patriarch and popes for the last generation have increasingly begun to speak together on issues of common concern," said George Demacopoulos, chair of Orthodox Christian studies at the Jesuit-run Fordham University in New York. "What you have here is a more specific case: You have the uniqueness of Pope Francis and the ecumenical patriarch at a tipping point in historical and European events."

According to the Greek organizers, Francis and Bartholomew will visit with new arrivals at Lesbos' Moria refugee registration center, which has essentially been turned into a detention center for refugees slated for deportation under the controversial EU-Turkey plan, which calls for new arrivals in Greece to be returned to Turkey. From Moria, Francis, Bartholomew and the head of the Church of Greece, Athens Archbishop Ieronymos, will visit the port in Mytilene, the island's capital, to meet residents and hold a prayer service.

"It's an extraordinary occasion," said Cardinal Peter Turkson, head of the Vatican's justice and peace office. "It's a historic event because something like this has never happened before."

Francis told his weekly general audience Wednesday that he and his Orthodox "brothers" were going "to express the closeness and solidarity to both the refugees and the citizens of Lesbos and the entire Greek people, who have been so generous in their welcome."

The Catholic and Orthodox Churches split in 1054 in a dispute over papal power, among other things. The Second Vatican Council's call for greater Catholic outreach to other Christians resulted in Pope Paul VI's historic meeting with the spiritual leader of the world's Orthodox, Ecumenical Patriarch Athenagoras, in Jerusalem in 1964.

In 2014, Francis and Bartholomew marked the 50th anniversary of that event with a meeting in Jerusalem, which was followed by Francis' visit to Istanbul later that year. The two men clearly get along well: Francis cited Bartholomew's environmental writings in his own 2015 ecological encyclical - a first for a pope.

Bartholomew is the Istanbul-based "first among equals" in global Orthodoxy. The Greek church is independent of the patriarchate, one of the self-governing, "auto-cephalous" Orthodox churches that also include the Russian, Bulgarian and Serbian churches. While the Greek church and Ecumenical Patriarchate get along, the Greek church has been far less cozy with the Vatican.

Not so long ago, the Greek church adamantly opposed a papal visit.

When St. John Paul II toured Greece in 2001, the first pope to do so since the Great Schism, he was met with howls of protest by Greeks who considered it a Roman Catholic attempt to establish authority over the Orthodox Church. Orthodox monks and nuns prayed through the night to stop the visit, ordinary Orthodox took to the streets to protest and monastery bells tolled in mourning.

There was even a diplomatic standoff over whether John Paul would kiss the ground upon his arrival, as was his custom upon landing in a foreign country. In the end, he did kiss a pot of soil.

More importantly, John Paul issued a sweeping apology upon arrival in Athens for the "sins of action and omission" by Roman Catholics against Orthodox, including the Crusades-era sacking of Constantinople, the center of Greek Byzantium.

Fifteen years later, there has been no hint of protest at Francis' visit.

And Catholic-Orthodox relations are clearly getting stronger: Bartholomew became the first ecumenical patriarch since the Great Schism to attend the installation of a pope when he was a guest of honor at Francis' 2013 installation Mass. Francis recently met with the head of the Russian Orthodox Church, Patriarch Kirill, the first-ever meeting between a pope and a Russian patriarch.

A delegation from the Vatican and the Moscow Patriarchate recently returned from Syria on a humanitarian aid mission that drew up a list of Christian sites that need to be repaired, evidence that even with the most estranged Orthodox church, Francis is finding common cause.

That said, Francis isn't visiting Greece on an official state visit but rather on a humanitarian mission to a Greek island, and just for a few hours.

In an indication of the delicate protocol issues at play, both diplomatic and ecclesial, there's no shared version of how the visit came off.

Bartholomew's office said he had invited Francis to join him in Lesbos via letter on March 30.

The Holy Synod of the Church of Greece, the decision-making body of the Greek church, said Francis had asked to come to Greece to highlight the plight of refugees, that the synod had proposed he visit Lesbos and invited Bartholomew to come along.

The Vatican said Francis had accepted an invitation from Bartholomew and the Greek president, with no mention of the Greek Orthodox Church.

"The reality was that this was the patriarch's idea," said Demacopoulos. "The pro-forma is that he had to go through the archbishop of Athens and the state of Greece to make it happen."