Is it time to move the line for embryo research? Here’s what’s missing from the debate. 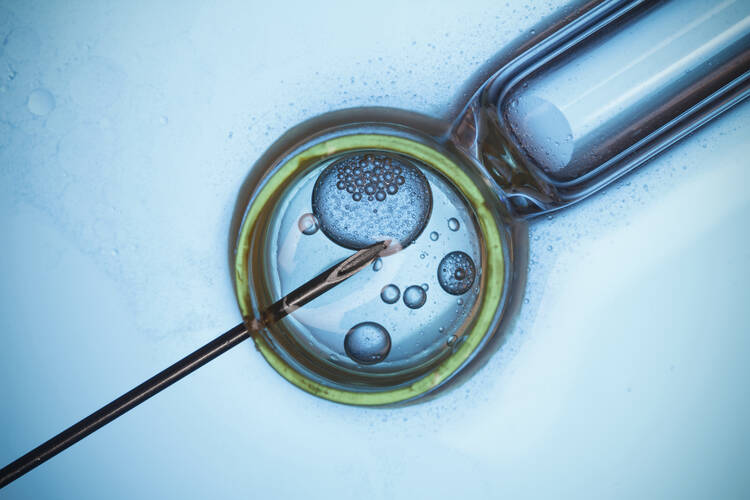 When Pope Francis’ encyclical “Laudato Si’” was published one year ago on June 18, the document was cheered by Catholics and non-Catholics alike for its bold call to preserve “our common home” for future generations. But what was dubbed the “climate change” encyclical by many in the press is about more than reducing greenhouse gas emissions. The pope’s “integral ecology” includes another inconvenient truth: “It is troubling that, when some ecological movements defend the integrity of the environment, rightly demanding that certain limits be imposed on scientific research, they sometimes fail to apply those same principles to human life” (No. 136).

In light of recent advancements in embryonic research and genetic engineering, it is worth revisiting this principle. In May, two groups of scientists revealed they were able to keep embryos alive in vitro for 13 days, breaking the previous record of nine days and bringing the researchers close to the 14-day legal limit on experimentation, after which the embryo must be implanted or destroyed. At two weeks, embryos can no longer fuse or split in two, a clear sign of biological individuation.

Now that this restriction has become practically relevant, some within the scientific community want to revisit the red line to allow for research into a critical but at this point mysterious stage of human development. Researchers arguing for extending the limit in the journal Nature argue that the 14-day rule was never meant to be a moral “bright line” but rather a tool “designed to strike a balance between enabling research and maintaining public trust.” Moving the experimental limit to 21 or 28 days, some scientists say, could help our understanding of a wide range of medical problems. This tactical repositioning confirms what the Catholic Church, which opposes all research that results in the destruction of embryos, has long recognized: that an arbitrary line in the sand does nothing to achieve real moral balance between scientific advancement and the value of human life.

The urgency of the debate over where to draw the line is heightened by another recent breakthrough. A powerful new gene-editing technique called Crispr/Cas9 allows scientists to precisely target and replace specific strings of DNA. The technique shows great promise for patients living with conditions likemuscular dystrophy (see “Celebrating Crispr,”Am., 2/8). More controversial is its potential use to modify human embryos. Such manipulations would not only have unknowable and potentially dangerous effects in the resulting child but would permanently alter the human germline. Last year, Chinese scientists became the first to use the technique on nonviable human embryos, and in February researchers in Great Britain received permission from the Human Fertilisation and Embryology Authority to use Crispr/Cas9 on human embryos to study the causes of miscarriage. This came just two months after a global summit at the National Academies of Science in Washington, D.C., called for a temporary moratorium on inheritable germline editing until “there is broad societal consensus about the appropriateness of the proposed application.”

Such consensus cannot be found unless the debate moves beyond the tactical questions of how old embryos have to be before their own inherent value outweighs the usefulness of their destruction. These ethical dilemmas need to be engaged at their root, at the question of what ends we should aim at, rather than what means can be justified. How can the church best engage in this vital dialogue?

“Laudato Si’” provides an integrated approach to these issues: “When we fail to acknowledge as part of reality the worth of a poor person, a human embryo, a person with disabilities...it becomes difficult to hear the cry of nature itself; everything is connected” (No. 117). We might ask environmentalists who strongly protest the production of genetically modified plants and animals: Is the modification of human embryos any less problematic? Or human rights activists who celebrated this year the first time a model with Down syndrome participated in Fashion Week: If her unique gifts can be recognized on the runway, why are we so quick to discard or edit such “defects” in embryos? And those concerned about the growing chasm between the rich and the poor: Should the wealthiest individuals be able to pass on to their children not only wealth but also genetically engineered intellectual and physical advantages?

In discussions of cutting edge genetics and “designer babies,” scientists are often accused of “playing God.” But such a deity is surely unrecognizable to the Christian. Ours is a God who pours out love especially on the poor, the weak, the disfigured and the imperfect. There are many scientists dedicating their lives to the same, “using their God-given talents for the service of others” (No. 131). Together we can work toward a common home that, while not perfect, is all the more precious for the diversity and frailty of every life.

The Editors
Show Comments (
3
)
Comments are automatically closed two weeks after an article's initial publication. See our comments policy for more.
Charles Erlinger
6 years 7 months ago
The editorial discusses several interesting, and possibly crucial issues in public and personal ethics at the same time. The overarching one is, of course, that of life. But a second one, it seems to me, is the issue of argument cogency. In this connection several lines of public argumentation can be reviewed. For example, frequently news and commentary events in both the secular and religious media have featured dialogues in which one person would argue in favor of some sort of gun control and an opponent would rejoin that the control argument was invalid because the control advocate simultaneously supported the woman’s right to choose, which is inconsistent with the respect for life purportedly supported by gun control advocacy. A similar argument can be observed in the media between researchers who advocate looser controls on the use of human embryos for the stated purpose of improving health care and avoiding serious birth defects and, on the other side, those who argue that the lofty purpose behind the advocacy is inconsistent with the principle that all human life is sacred. Indeed, even in Laudato Si, the cited paragraph from No. 136, "It is troubling that, when some ecological movements defend the integrity of the environment, rightly demanding that certain limits be imposed on scientific research, they sometimes fail to apply those same principles to human life” (No. 136),” the objection seems to be that one of two different propositions is bad because the position in favor of the one is inconsistent with the the position in favor of the other. I call this in general the causal argument from consistency, and I call it spurious. I see consistency as descriptive, not causal. Now it may well be true that a person is motivated by a concern for consistency in taking an advocacy position but the concern for consistency is further motivated by a concern for appearances which may further be motivated by vanity or pride. But now we are in an area of thought that is far removed from the basics of the original issue and in my opinion, an area which is singularly unproductive of consensus. I do see more promise in the approach suggested in the editorial, namely, “These ethical dilemmas need to be engaged at their root, at the question of what ends we should aim at, rather than what means can be justified.” Indeed, Laudato Si paragraphs 139 and 140 practically beg that this approach be undertaken. It is a perfect justification for a consortium of Jesuit schools to get to work on this.
Lisa Weber
6 years 7 months ago
What happens to the "mistakes" made in genetic engineering? If it is a calf, you can send it to the slaughterhouse. Is the same true of humans? So much of genetic engineering is repulsive.
John Walton
6 years 7 months ago
Nine days, fourteen or twenty-one -- there is no basis in denying that the embryo has a distinct set of genetic characteristics separate from the mother and father,and some which are characteristic to both. One is right in presuming that its individual characteristic make it a tabernacle.