Marked for Christ: The sacred symbolism of religious tattoos 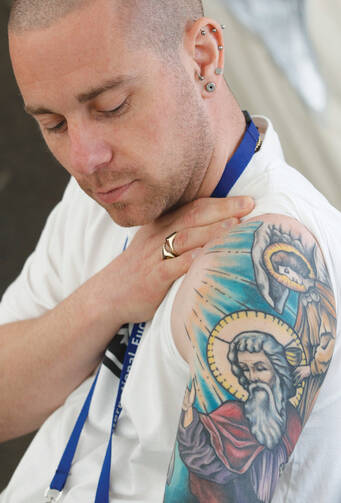 Gabe Wells wears glasses and a button-down shirt, is built like a tank and has several large, Catholic-themed tattoos. He got his first when he was doing a year of service after high school. It is an angel surrounded by ivy on his upper arm, a reproduction of a 15th-century illuminated manuscript. The angel on the other arm quickly followed. He was 19, traveling the country, helping to lead confirmation retreats for students from Catholic high schools and doing a lot of thinking. College was not for him; he grew up in a blue-collar family and wanted to work with his hands, but he also loved to read and spent hours in the library learning about medieval art, the great books and the lives of the saints. Within a year he had two more Catholic tattoos: a full-color illustration of a dove on one side of his chest and the reverse of the medal of St. Benedict across his abdomen.

People of all walks of life have religious-themed tattoos. According to the Pew Research Center, 40 percent of Americans between the ages of 26 and 40 have at least one tattoo. The Catholic Church does not forbid body art. In fact, at the Catholic Council of Northumberland in 786, a Christian bearing a tattoo “for the sake of God” was deemed worthy of praise. The tradition of Christian tattoos goes back hundreds of years in the Egyptian Coptic church but is relatively new in the West, and yet, a generation of young Catholics has found that the symbols of Catholicism—crosses, icons, rosaries, paintings and medals—easily translate into tattoo art.

Wells was raised in the South and was culturally Catholic, but not religious, until he went on a retreat in high school. “I enjoyed the experience,” he says. “I also enjoyed punk and heavy metal. It was hard to reconcile the two, but I liked the freedom among Christians, the ability to discuss faith, truth, love—things that mattered more than materialism and looking cool...and being Catholic became a priority in my life.” Over time, Wells tried to find a balance. He has worked offshore, installing pipeline for oil companies in the middle of the ocean and is now a machinist in Houston, Tex., where he is a fixture on the hardcore music scene. And he proudly wears his angel-loving heart on either sleeve.

The back side of the medal of St. Benedict is his largest tattoo. It is a black cross, surrounded by a circle. On the arms of the cross are the initial letters of a Latin prayer of exorcism, which reads: “May the holy cross be my light! May the dragon never be my guide.” Around the margin of the back of the medal, another prayer of exorcism: “Begone Satan! Never tempt me with your vanities! What you offer me is evil. Drink the poison yourself!” The tattoo took six hours and felt “like surgery” or penance. Why choose these prayers, rather than something more reassuring? “Being alive, being a human being,” he says, “is not an easy thing.”

Wells has known adversity. He fathered a child as a young man, and the subsequent marriage did not work out. He has since obtained an annulment, fallen in love and remarried. He says, “Sometimes we do bad things and we don’t even know why. I just thought it was important that I have a reminder of my own death, and who I want to be.” For him, the tattoo is a sign of devotion, a prayer of protection and an opportunity to repent. It also looks cool.

His only regret is that the sight of his tattoos occasionally distresses older Catholics whose sensibilities differ from his own and who “question whether it’s divinely inspired or whether my motivation was simply the glorification of self.” Gabe tells those who confront him that the tattoos are no different from a medal you never take off. The vast majority of the time, the largest tattoo is not visible. “It wasn’t for other people,” he says. “It was for me, but it is troubling when it sparks disunity within the church. That upsets me.”

In Flannery O’Connor’s short story “Parker’s Back,” O. E. Parker, a non-religious and chronically dissatisfied man who is covered with meaningless tattoos, has a frightening experience: He is thrown from his tractor just before it crashes into a tree and bursts into flames. O’Connor writes, “If he had known how to cross himself he would have done it.” After this experience, Parker rushes into the city to get “God” tattooed on his back. As he flips through the pages of the religious tattoo art, he rejects the comforting images of “The Smiling Jesus” and the “Physician’s Friend” and instead chooses an image of a “Byzantine Christ with all demanding eyes.” When he goes home to his fundamentalist Christian wife to show her the tattoo, thinking she will be moved by the change in him, she instead accuses him of idolatry and beats him “until she had nearly knocked him senseless and large welts had formed on the face of the tattooed Christ.”

Many Christians still see the man with “God” tattooed on his back as a freak or an outcast, but perhaps this is, in some way, the goal. A follower of Christ ought to be a challenge to himself and others, someone difficult to classify, like Gabe Wells, a stranger in a strange land. Someone who suffers, like O. E. Parker, who at the end of “Parker’s Back” is cast out into the night alone “crying like a baby.” In one sense all Christians are O. E. Parker, claimed for the world by brand-name clothes and other status symbols, and terrified of being claimed by God. For Parker and others like him, the religious tattoo becomes a kind of sacramental, like a crucifix or a medal. It is an outward sign of an inward reality and, because of its permanence, a lifelong commitment.

Signs of Suffering and Hope

Some religious tattoos are smaller, but no less meaningful. Allison McGinley has green eyes, a bright smile and a pink scarf around her neck. She was raised culturally Catholic but not practicing. An unhealthy relationship in high school caused her to lose completely what little faith she had. Then, during college, she went on a retreat “out of curiosity.” When she was praying on the retreat, she heard a song called “God Is,” by Danielle Rose, and started to wonder if maybe God had been there for her in high school, after all, through all the people who had helped her through it.

Years later McGinley was happily married and expecting her first child. Then, everything seemed to fall apart. She started having chest pains and feeling sick. She told multiple doctors about her symptoms, but they were dismissive. “I felt like I was going crazy,” she says. “I was close to true despair. I wrote in my journal, ‘I used to think God was real. I don’t even know what to think anymore. I feel so alone.’”

Later an X-ray showed a softball-size tumor in her chest. She was 27 years old, 32 weeks pregnant and diagnosed with cancer. She began to sob, asking the doctor, “Am I going to die? Is the baby going to die?” She said to the child in her womb, “I’m so sorry. I love you.” The doctors had to get the baby out and start McGinley’s chemotherapy as soon as possible, but the neonatal intensive care unit did not want to take the baby too soon and risk her son’s life as well.

The night before Allison was going to have an emergency C-section and start chemotherapy, she was overwhelmed with fear that either she or the baby would die. She woke her husband and said, “I need to pray with you.” They were praying to the Holy Spirit in the darkness of their hospital room when God made his presence felt. “It’s kind of hard to explain,” she says, “but we both felt this unmistakable presence in the room. We just stared at each other and then this calm came over us. I lay back down and just felt so peaceful... I just thought, ‘O.K., I get it; I’m not in control. I never have been.’” Allison’s procedures were painful. When she was taken into surgery her arms were tied down and an arterial line was put in her wrist. “I felt like I was being crucified,” she said. McGinley and her son survived the surgery. They named the baby John Paul, after the pope who often said, “Be not afraid.” Today McGinley is almost two years in remission.

After she beat cancer, Allison had a white dove tattooed on her wrist at the place where the arterial line had once caused her so much pain. She would like to get back to life as it was before she was sick, but she knows life will never be the same. She is not grateful she had cancer, but she is grateful that she has known the peace that surpasses understanding. “I’m the last person on earth you would expect to have a tattoo,” she says. “I wasn’t the rebel in my family.” She adds, “I wanted something that I could see everyday to say, ‘Remember what happened.’ I just want to always remember the incredible peace I found in giving everything over to God the night before John Paul’s birth. And I just want to be content with that, no matter what.”

Tattoos with religious themes remind us that there are as many different kinds of holiness as there are people and that the saints of today may look different than those of ages past. What remains the same is that the light of Christ shines through them all.

Anna Nussbaum Keating is the co-owner of Keating Woodworks in Colorado Springs, Colo.