Skip to main content
Of Many Things
August 31-September 7, 2015 issue 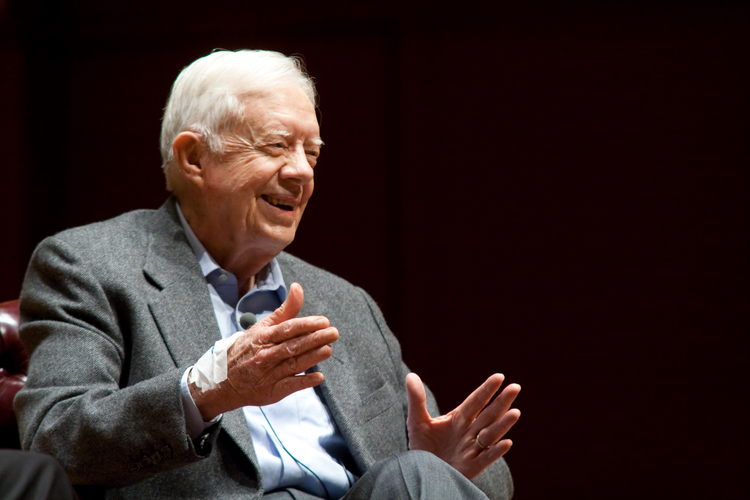 The news last week that former President Jimmy Carter has what is most likely terminal cancer was sad to hear and, strangely enough, caught me off guard. The Man from Plains is close to 91 years old now, but his still-vigorous activism very nearly obscures that fact. Until recently Mr. Carter was still swinging a hammer at Habitat for Humanity sites and teaching Sunday school for something like his 50th consecutive year, a catechetical career he did not allow even his presidency to interrupt.

I suppose Jimmy Carter is one of those folks who seem like they have always been there, a constant, reassuring, sometimes nagging presence in our national life, a symbol of the better angels of our collective nature. For 30 years as our most popular former president, he has functioned as the nation’s conscience, mainly because, like Pope Francis, he’s the real deal: a leader who says what he does and does what he says.

Americans claim we want that kind of leader, but we rarely reward them on election day. Consider President Carter’s most famous oval office address, the so-called malaise speech, which he delivered 36 years ago this summer. In that much-maligned address, the president told it like it was, a far cry from the ethically-impoverished imperial presidency of Richard Nixon or the B-movie Hollywood blockbuster of the Reagan years.

The speech still has much to say to us. The president addressed that night what he called “a fundamental threat to American democracy.... It is a crisis of confidence.... Our people are losing that faith, not only in government itself but in the ability as citizens to serve as the ultimate rulers and shapers of our democracy....” Sounds about right, doesn’t it? Does not a similar sentiment help explain the state of our politics now, the rise of the Tea Party, the insurgency of Occupy Wall Street, the entry of pseudo-populist demagogues onto the national stage?

Mr. Carter continued: “In a nation that was proud of hard work, strong families, close-knit communities, and our faith in God, too many of us now tend to worship self-indulgence and consumption. Human identity is no longer defined by what one does, but by what one owns. But we’ve discovered that owning things and consuming things does not satisfy our longing for meaning. We’ve learned that piling up material goods cannot fill the emptiness of lives which have no confidence or purpose….” If I had told you that that last quote was from “Laudato Si’,” you all would have believed me.

Then, before speaking about the specifics of his energy and economic plan, the president told his viewers: “For the first time in the history of our country, a majority of our people believe that the next five years will be worse than the past five years. Two-thirds of our people do not even vote.” Is today any different? In a Washington Post exit poll conducted for the 2014 midterm election—an election in which voter turnout was the worst in 72 years, “almost half of all Americans—48 percent—said they expected life for ‘future generations’ to be ‘worse than life today,’ while 22 percent said it would be better. Another 27 percent said life would be about the same.”

Much to ponder here. The speech should be remembered for more than malaise. Mr. Carter told truths that were hard to hear, but they are only truer today. Was he rewarded for his candor? In a word, no. He was trounced just a year later in the first Reagan landslide. Yet the speech was as hopeful as it was realistic. “All the traditions of our past, all the lessons of our heritage, all the promises of our future point to another path, the path of common purpose and the restoration of American values. That path leads to true freedom for our nation and ourselves.” Well said, Mr. President.

Show Comments (
6
)
Comments are automatically closed two weeks after an article's initial publication. See our comments policy for more.
Robert Hugelmeyer
4 years 9 months ago
A liberal's view of the world is to see what they want to see condemning those Presidents on the Right who contributed far more then President Carter. He broke with the tradition by criticizing setting Republican Presidents but ignored President Obama who I would need to spend hours recording his failures over the last almost seven years. Open your eyes and see the truth that escapes you because of your preset biases residing on the Left.
Beth Cioffoletti
4 years 9 months ago
About a week before Carter made the announcement that he had cancer, my nephew and his wife and their 4 young sons went to Plains GA. My nephew recently left the Air Force for a private position in Southwestern Georgia, and Plains was just 20 miles away. They happened to be there for Sunday School, led by President Carter. Carter was gracious and so generous with his time, they said. taking questions from his sons: "what do you think of UFO's?" and patiently answering them. He and Rosalyn posed for family photos with them. These photos will be a keepsake for my nephew and his family, probably passed down for generations. In retrospect, I can see that Carter probably knew that this would be his last Sunday school teaching in Plains, and that he was relishing that gift of who he was and how he had lived. We are all much blessed by Jimmy Carter, politically and otherwise. He adds a gentle integrity to the complex mosaic of America.
Joshua DeCuir
4 years 9 months ago
This piece would be a bit more convincing if it acknowledged that Pres. Carter failed to "tell it like it was" to his pals Hugo Chavez, Fidel Castro, or Yasser Arafat. I wish he would have told them a few "truths hard to hear " rather than whitewashing their authoritarian, corrupt & immoral regimes all while impoverishing hundreds of thousands & posing threats to their neighbors.
Neal Tasch
4 years 9 months ago
Well said, Father Malone.
Cody Serra
4 years 9 months ago
Wonderful and deserved recognition of an honest and faithful man, whose example of service and activities pro justice will remain in history. Thank you.
MICHAEL COLLINS MR/MRS
4 years 9 months ago
Dear Father Malone, Your liberal stripes are glowing. While President Carter may have been a decent man and said some wise things, that alone doesn't mean he deserved to be re-elected to office. POTUS should also be an effective leader. His record as President was anything but stellar. I believe that any president is neither as good as his supporters make him out to be, nor as bad as his detractors say he is. Reagan was, at least in my opinion, an effective leader which might be one reason he was elected twice.
Advertisement

This article also appeared in print, under the headline “Of Many Things,” in the August 31-September 7, 2015, issue.